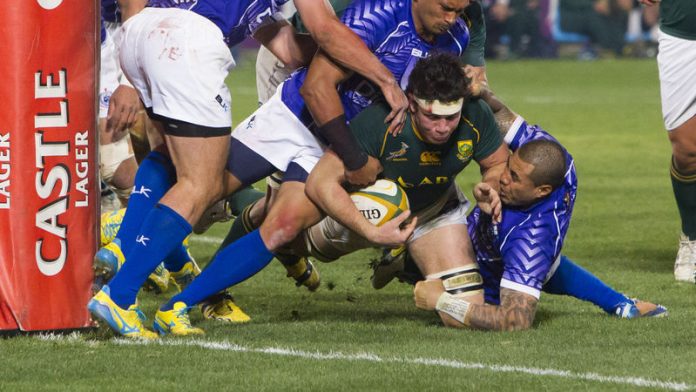 Habana's 50th was the standout moment in a scrappy match that left Samoa with little credit for their play with the ball or their ungentlemanly tactics without it.

The two teams came into the game unbeaten after wins over Italy and Scotland but it was the home side that dominated.

It did, though, take South Africa close to 20 minutes to score their first try, with fullback Willie le Roux timing his pass to perfection to set Habana over in the corner.

The second try was typical Springbok play as they mauled the ball up from a lineout, allowing Louw to simply fall over the line.

The hosts were looking to run the ball at every opportunity and Samoa's repeated infringements as they tried to slow down play resulted in a yellow card for prop Logovi'i Mulipola.

Scrumhalf Jeremy Su'a was fortunate not to receive a red card for what looked a stamp on Louw's head at a ruck which left the Springbok flanker bloodied.

By now the home side were well on top and Engelbrecht showed excellent footwork for their third try, dancing his way out of three attempted tackles to race over the line.

The Springboks managed another try before halftime, using the width of the field to set winger Basson free in the corner.

The second half descended into chaos at times, with no structure and more nastiness on and off the ball.

Filo Paulo barged his way over the tryline to give Samoa some hope but from then on they seemed more interested in disrupting the South Africans than playing rugby themselves.

Samoa fullback James So'oialo was penalised, but not carded, after being adjudged by the TV match official of grabbing hooker Adriaan Strauss in an "indecent manner" at the ruck, his hand ending up between the legs of the enraged front-rower.

Samoa were permanently reduced to 14 men after Alesana Tuilagi's high tackle on home captain Jean de Villiers while Census Johnston was fortunate not to be sent from the field for kicking out at Coenie Oosthuizen after a tackle by the prop.

In between all the infringements, some decent rugby was played and Habana was sent clear in the corner for his 50th Test try after good work from Ruan Pienaar drew the defence.

Habana was then yellow-carded after he was ruled to have knocked the ball down deliberately and Samoa scored their second try shortly after through Poluleuligaga.