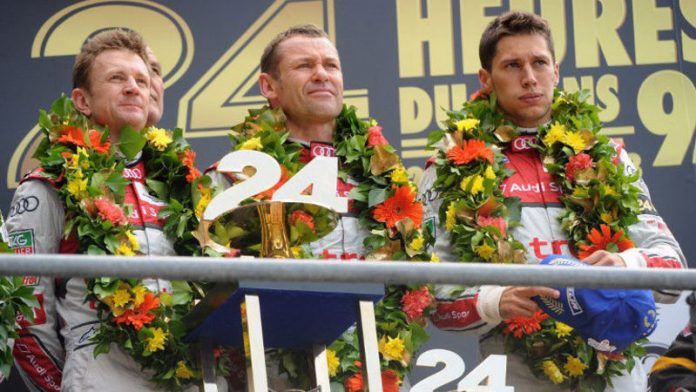 Simonsen's death cast a pall over the race's 90th anniversary.

With Danish flags at half-mast over the podium, a standing ovation was held before the victory ceremony in memory of the Aston Martin driver who died after crashing only minutes into the race on Saturday.

Kristensen, Denmark's greatest racing driver, told the crowd he had intended to pay tribute to his father but the first race fatality in 27 years at the Sarthe circuit had forced a change of plan. "He can wait for the next victory of mine," he said, voice laden with fatigue and emotion after the final stint to the chequered flag. "This victory today I dedicate to Allan Simonsen, a great fellow Dane."

The muted win, after a race littered with safety car periods on a wet weekend in western France before the sun came out at the finish, was Audi's fourth in succession and 12th in a dominant 14 years.

"Three's a much nicer number than two, especially when it's at Le Mans," said McNish, whose Audi R18 e-tron quattro diesel hybrid had started on pole position. His 45-year-old team mate was already the most successful driver in Le Mans history, having surpassed Jacky Ickx's tally in 2005. The two greats hugged on the podium in an embrace laden with sadness.

Toyota finished as runners-up in the 81st running of the endurance classic with their number eight car driven by France's Stephane Sarrazin, Britain's Anthony Davidson and Swiss driver Sebastien Buemi finishing one lap behind the winners.

Broken back
That provided more of a feel good story with Davidson stepping onto the podium a year after he broke his back in a huge crash at Le Mans. "This time last year I was lying on my back in Le Mans hospital," he said. "I felt like a needed a bit of luck this time. This race has been so cruel to me so many times." Davidson also paid tribute to Simonsen, an old rival he first raced against in go-karts in 1996.

"It's very hard, especially with what happened to me last year, to fight my own demons and carry on driving," said the Briton.

Simonsen's Aston Martin team had vowed to carry on and win their GTE Am class in a tribute to the 34-year-old and at the request of his grieving family but that was not to be with Porsche taking that honour.

"The whole team pushed because they wanted to get the win as a tribute for Allan but a series of small incidents, small accidents, small mistakes and we did not quite achieve it," said Aston Martin boss David Richards.

The most recent fatality connected with the race was Frenchman Sebastien Enjolras, killed during pre-qualifying in 1997, but the last to die during the race was Austrian Jo Gartner in 1986.

Le Mans, the scene of motor racing's deadliest accident when at least 80 people died and scores more were injured in a 1955 disaster, ranks with Indianapolis and Monaco as one of the sport's great events.

Most of the first hour of the race was behind the safety car before racing renewed in a battle between Audi and Toyota that lasted through the night and into the dawn.

The number one Audi suffered a knockout blow at the quarter distance when a problem with the motor generator kept the car in the pits for 43 minutes before it returned to the track in 24th place and 12 laps behind.

The number three Audi also hit problems, dropping to fourth place where it remained through the night after limping back to the pits with a right rear puncture and then also requiring repairs in the garage. Through it all, the number two Audi kept out of trouble with neutrals willing Kristensen on for the emotional finale. – Reuters