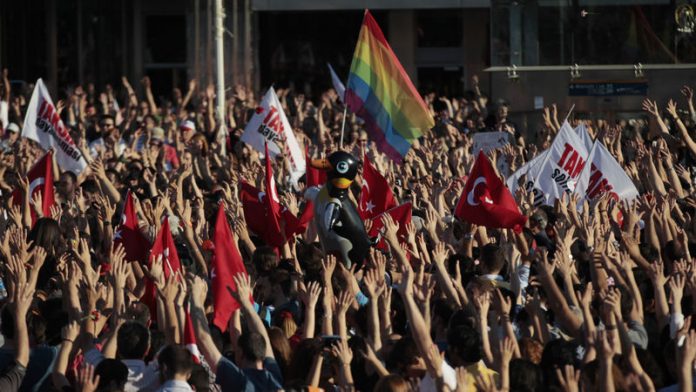 Meanwhile Prime Minister Tayyip Erdogan castigated those behind protests he said had played into the hands of Turkey's enemies.

The latest unrest in Taksim Square punctured six days of relative calm in Turkey's biggest city, although it was a long way from matching the ferocity of previous clashes there and in other cities that began more than three weeks ago.

Demonstrators threw carnations at a phalanx of officers carrying shields who slowly advanced towards them, flanked by water cannon, to clear the square.

"Police, don't betray your people!" activists shouted after they had been scattered into streets leading to Taksim. Witnesses said police also used teargas to disperse protesters in nearby streets in cat-and-mouse clashes.

In the capital Ankara, riot police fired water cannon and teargas to break up hundreds of protesters, some of them shouting anti-Erdogan slogans, and at one location they built barricades to block a main street, according to witnesses.

Earlier, Erdogan told thousands of supporters in the Black Sea city of Samsun that the unrest played into the hands of Turkey's enemies.

A crowd of some 15 000 of his AK Party faithful cheered and waved Turkish flags as he called on the public to give their answer to demonstrations at the ballot box when Turkey holds municipal elections next March.

The rally in the party stronghold was the fourth in a series of mass meetings which Erdogan has called since protests began in Istanbul at the start of June in an unprecedented challenge on the streets to his 10-year rule.

The unrest was triggered when police used force against campaigners opposed to plans to develop Gezi Park which adjoins Taksim Square, but they quickly turned into a broader show of anger at what critics call Erdogan's growing authoritarianism.

The blunt-talking 59-year-old, who has led Turkey through an economic boom and still enjoys broad popular support, went on the offensive again, saying an "interest rate lobby" of speculators in financial markets had benefited from the unrest.

"Who won from these three weeks of protests? The interest rate lobby, Turkey's enemies," Erdogan said from a stage emblazoned with his portrait and a slogan calling for his supporters to "thwart the big game" played out against Turkey.

"Who lost from these protests? Turkey's economy, even if to a small extent, tourism lost. They overshadowed and stained Turkey's image and international power," he said.

In a speech appealing to conservative grassroots support, Erdogan accused those involved in the protests in Turkey's main western cities of being disrespectful towards Islam, the religion of the vast majority of the population of 76-million.

"Let them go into mosques in their shoes, let them drink alcohol in our mosques, let them raise their hand to our headscarved girls. One prayer from our people is enough to frustrate their plans," Erdogan said, before tossing red carnations to the crowd after his speech.

The protests have underlined divisions in Turkish society between religious conservatives who form the bedrock of Erdogan's support and more liberal Turks who have swelled the ranks of demonstrators.

Erdogan, who won a third consecutive election in 2011 with 50% support, sees himself as a champion of democratic reform, and has been riled by the protests and by international condemnation coming mainly from key trade partner Germany.

During his decade in power, which has seen him unchallenged on the political stage, Erdogan has curbed the powers of an army that toppled four governments in four decades and pursued an end to 30 years of Kurdish rebellion.

But he brooks little dissent.

Hundreds of military officers have been jailed on charges of plotting a coup against him.

A court near Istanbul is due to announce on August 5 its verdict on nearly 300 defendants, including academics, journalists and politicians, accused of separate plots to overthrow the government.

On Sunday, Erdogan will address a rally in the eastern city of Erzurum, also an AK Party stronghold. – Reuters

Turkish journalists and judges are in Erdogan’s cross-hairs, says journalist

​Turkey’s free media is under threat and the coup attempt earlier this year has angered the Erdogan further.
Read more
World

Turkey preps to end mine rescue, death toll at 301

Turkey's rescue workers believe they have found the bodies of the last miners who have died in the country's worst industrial disaster.
Read more
World

Turkey's deputy prime minister has given a nod of approval to a new form of peaceful resistance that is spreading through Turkey.
Read more
World

A Turkish man has staged an eight-hour silent vigil on Istanbul's Taksim Square, inspiring hundreds of others to follow his lead.
Read more
World