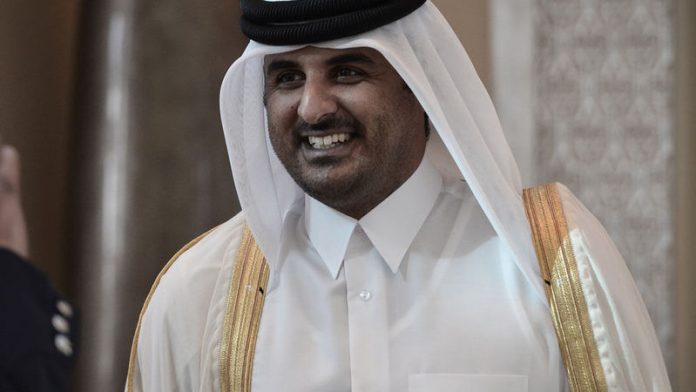 The 61-year-old emir hands over a small but economically strong Gulf state that has become a major actor in international diplomacy and an important role player in Arab Spring uprisings.

"I announce handing the rule over to Sheikh Tamim bin Hamad al-Thani," the emir said in a televised speech on Tuesday.

The decision marks the "beginning of a new era in which a young leadership will hold the banner," he added.

Sheikh Hamad, who used Qatar's immense gas wealth to drive its modernisation, came to power in a coup in which he overthrew his own father Sheikh Khalifa in June 1995.

His decision to abdicate sees Tamim propelled into the youngest sovereign of any of the Gulf Arab monarchies.

The occasion was marked by the declaration of Tuesday as a public holiday.

A diplomat said that by freely stepping down the emir would "score a first in the Arab world", where autocratic rulers held power uncontested for decades until the Arab Spring revolutions that toppled regimes in Tunisia, Egypt and Libya.

Tamim, born in 1980, is the second son of the emir and his second wife Sheikha Mozah and has been groomed for years to take the helm of the super-rich Western ally.

'Ministerial reshuffle'
The British-educated Tamim is deputy commander of the armed forces and head of the National Olympic Committee. He also chairs the Qatar 2022 Supreme Committee in charge of hosting the 2022 Fifa World Cup.

Diplomats said that over the past three years the emir has increasingly transferred military and security responsibilities to Tamim, who like his father went to the British military academy Sandhurst.

He also went to Sherborne School in Dorset.

"The emir is convinced that he should encourage the new generation. He plans to transfer power to the crown prince … and to carry out a ministerial reshuffle to bring a large number of young people into the Cabinet," a Qatari official had told Agence France-Presse on Monday.

The emir has developed Qatar into a political and economic powerhouse with multibillion-dollar investments across the world.

Analyst Neil Partrick, an expert on the Gulf, ruled out major changes in Qatar.

"Tamim already has responsibilities for sensitive foreign portfolios among other matters," said Partrick.

"For Qatari foreign policy, none of this seems likely to produce major change. The young heir apparent Tamim is unlikely to affect major changes without consulting his father."

It has major global investments, including in the French football club Paris Saint-Germain, in hotels, in a resort on the Italian island of Sardinia, and stakes in Volkswagen, energy giant Total and Britain's Barclays Bank.

The Gulf state also controls a powerful media empire through Al Jazeera, the first pan-Arab satellite channel which also broadcasts in English, and earlier this year bought struggling US cable channel Current TV in preparation for the launch of Al Jazeera America. – AFP