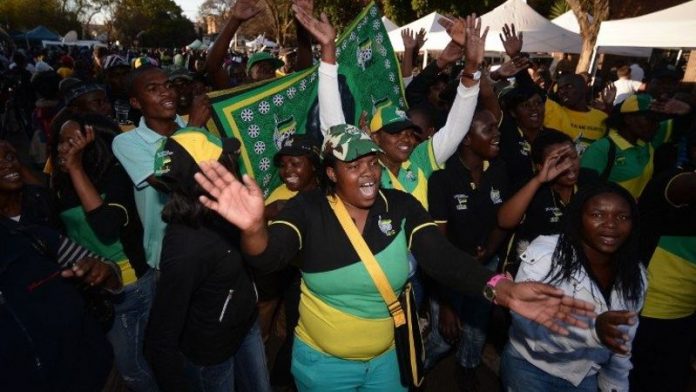 Hundreds of ANC supporters were bussed to the Pretoria Mediclinic Heart hospital where Mandela was being treated.

"There is no born-free without a liberator. Vote ANC 2014," read the back of T-shirts being worn by supporters.

More shirts bearing President Jacob Zuma's face were offloaded by a truck. The truck was easily identifiable as one hired by the party by the enormous picture of the president displayed on its side and rear.

As the truck made its way past the entrance to the hospital late on Wednesday, five more buses arrived outside the hospital.

More supporters emerged dressed in ANC regalia, singing struggle songs. Supporters told the Mail & Guardian that they had come to the hospital to pray for Nelson Mandela.

Indeed, the ANC Women's League held a prayer-and-hymn singing session outside the hospital gates. But their prayers were two-fold.

"Next year we are voting, so we are campaigning. But this is not a campaign event. We are praying for Mandela to get better but we are also praying for the nation to vote ANC next year," said Martin Minyuko, an ANC member who arrived in Pretoria from Hammanskraal on Wednesday evening.

A women's league member, Sarah Lethabo, also said she had come to pray for Mandela. But "today I am ANC, so I am also the mother of Nelson Mandela," she said.

The women's league brought framed pictures of Mandela and flowers to the wall at the entrance to the hospital, to add to the scores of letters and tributes already left behind by the public.

An ANC banner was hung from above the hospital, while other banners bearing Zuma's face were distributed among the supporters.

People walking past the hospital, some with their dogs and others with children, stopped and watched the group. Some took photos on their cellphones.

Another grandchild, Mandla Mandela, left a little while earlier, his vehicle nosing through the swell of well-wishers.

The presidency's announcement mid-afternoon that Mandela's condition had improved during the course of the night eased the tension brought on by no new information earlier.

According to the presidency's statement: "President Jacob Zuma visited former president Nelson Mandela in hospital in Pretoria today, June 27, and was informed by the medical team that Madiba's condition has improved during the course of the night.