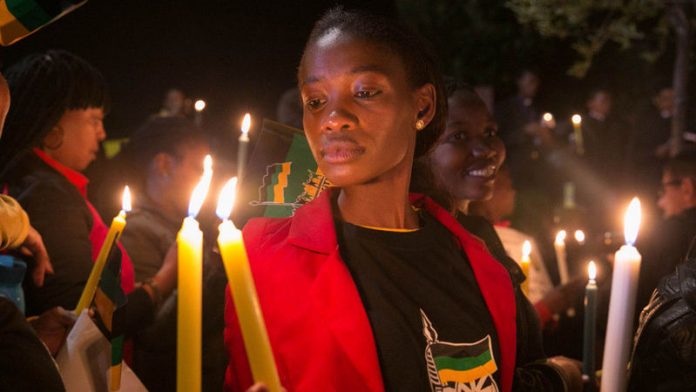 On Thursday over 200 men and women clad in traditional green-black and yellow ANC regalia, contrasted by the black and white outfit of four local bishops, came to pay their respects to the widely respected former state president.

“God has the final word in all our lives, Nelson Mandela is no different. God’s wishes will unravel what will be of our beloved father,” said a young Bishop given the honour of leading one of many prayers across the country.

The night vigil, organised by the Gauteng provincial ANC took over an already busy Vilakazi Street with ANC flags, posters and banners hung across Mandela’s home-turned-museum. An orderly crowd and scores of media houses bowed their heads in prayer and nodded to the scripture chosen for the night: Sums, chapter 71: 1-7: "In you Lord I have taken refuge".

The scripture, a message specific to the ailing statesman and the higher power read: “Let me never be put to shame, in your righteousness, rescue me and deliver me; turn your ear to me and save me. Be my rock of refuge, to which I can always go; give the command to save me, for you are my rock and my fortress. Deliver me, my God, from the hand of the wicked”.

Passers-by could not help but grab a candle, with plenty in supply, and join the songs and prayer. Some climbed off their buses from work a few stops before they reached their destinations.

After the prayer a huge poster of Mandela was carried to the streets in song and dance, with the mood less gloomy than earlier.

All ANC provincial offices had an hour-long session at the same time as the public. Earlier in the day the ANC announced that there would be prayers countrywide. In Pretoria a prayer meeting was held in Park (near the hospital) and Wessels streets.

"While we have all been praying in our homes, private places and churches, the African National Congress will now be rolling out prayer sessions where all South Africans can come together, hold hands and pray for Madiba, his family and medical team," spokesperson for the ANC Jackson Mthembu said earlier in a statement.

Mandela has been in a critical but stable condition all day following a scare when his health worsened overnight.

Everybody’s staying pozi, which is making all the arrests easy for the Hawks. Only Ace is desperate to be seen
Read more
Advertising