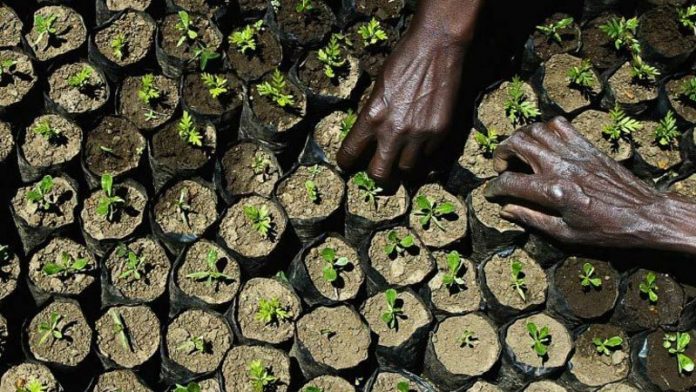 The pretty pink and purple flowers look good in a vase. In spring they line the verges of highways and make for lovely scenic photos. But pompom weeds (Campuloclinium macrocephalum) are choking off South Africa’s natural flora and fauna.

The weeds were imported from their natural habitat in South America in the 1960s. At first, they were confined to people’s gardens, but a research paper on the weeds in the 1990s said there was “a dramatic and exponential phase with vast tracts of land invaded”.

Since then, the weed has “outpaced attempts to control it” and is now “rapidly becoming the most serious threat to the conservation of the grasslands of South Africa”, according to the Agricultural Research Council.

This is because they thrive in the broken places left by human development — roadsides and building sites. With the natural vegetation torn out, they have virgin territory to seed in. They then move into the more established biomes nearby, particularly grasslands and wetlands.

The Conservation of Agricultural Resources Act makes it “illegal to harbour, plant, propagate or sell” pompoms. The onus is also on landowners to control them if they grow on their property.

Lesley Henderson, a weed scientist at the ARC-Plant Protection Research Institute, said the weeds grow so well because local conditions are similar to those in South America. But, unlike there, the weeds have no natural enemies locally because they are not part of the ecosystem.

“Pompoms can grow vigorously and outcompete indigenous species largely because they are free from their natural enemies,” she said.

The plant has evolved to be the perfect opportunist. One pompom can drop 300 seeds a season. These survive any fluctuations in temperature and rainfall. In winter, the plants wither away and all that remains are the roots, keeping them safe from the veld fires that kill off any indigenous competition. And in spring, people unwittingly aid the spread of the weed by picking the flowers.

First found in Gauteng, pompoms have spread to all the northern provinces. At the moment, only KwaZulu-Natal says it is winning the fight. In Gauteng, the responsibility for fighting it is unclear. The provincial agriculture department said the responsibility lay with the national department, which did not respond to questions.

Working for Water, which is nominally tasked with killing invader species countrywide, says pompoms are a threat to water resources. They choke out any other plants in wetlands, which are already under pressure from human development, and soak up the water. When the wetlands dry up, the water affairs department has to build expensive treatment plants to take over the  wetland’s natural process.

Killing pompoms is hard. In presentations to Parliament, Working for Water admitted it was “falling further behind” in controlling pompoms and other invasive plants. The latest South African Yearbook estimates that 10-million hectares have been taken over by invasive plants in the country. It also said this number would double in the next 15 years.

The guidelines provided to farmers on managing pompoms encourage the use of some herbicides. But these are a risk to other plants, so application is a labour-intensive process.

Another solution is to introduce the plant’s natural predators. Researchers went to South America and found that their greatest weakness was a fungus that released rust. This neutralised the pompom seeds and killed the whole plant, including the roots. The method is still in its infancy, though.

Unified, proactive action is required to push back the frontiers of poverty
Read more
Special Reports

No single nation has the capacity