Beauty: Seeing is not always believing 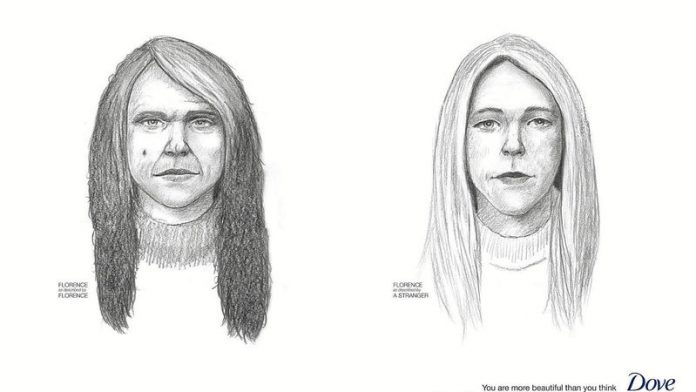 It begins with a woman telling a hidden FBI forensic artist what she looks like, while he draws. Then she is described by a stranger, informing a kinder second picture.

When the subject finally views the pair of portraits, she emotes over the discrepancies between them. Cue the feel-good tag line: You are more beautiful than you think.

There are many aspects of this that one could take issue with. None of the drawings actually do the women justice. There was the revelation, too, that previous Real Women images were retouched.

As if that isn't enough, Scientific American reports on research that says, actually, you think you're more beautiful than you are.

We have a deep-seated need to feel good about ourselves and we naturally employ a number of self-enhancing (to use the psychological terminology) strategies to achieve this. Social psychologists have amassed oceans of research into what they call the "above average effect", or "illusory superiority", and show that, for example, 70% of us rate ourselves as above average in leadership, 93% in driving (across the ages and genders) and 85% at getting on well with others – all obviously statistical impossibilities.

Psychologist and behavioural scientist Nicholas Epley oversaw a key study into self-enhancement and attractiveness. Rather than have people simply rate their beauty compared with others, he asked them to identify an original photograph of themselves from a line-up including versions that had been morphed to appear more and less attractive.

Visual recognition, reads the study, is "an automatic psychological ­process, occurring rapidly and intuitively with little or no apparent conscious deliberation".

If the subjects quickly chose a falsely flattering image – which most did – they genuinely believed it was really how they looked.

Epley found no big gender difference in responses. Nor was there any evidence that those who self-enhanced the most (that is, the participants who thought the most doctored pictures were real) were doing so to make up for insecurities. In fact, those who thought that the images higher up the attractiveness scale were real directly corresponded with those who showed other markers for having higher self-esteem.

"I don't think the findings that we have are any evidence of personal delusion," says Epley. "It's a reflection simply of people generally thinking well of themselves."

If you are depressed, you won't be self-enhancing.

Crushingly negative feedback
Knowing the results of Epley's study, it makes sense that many people hate photographs of themselves – on one level, they don't even recognise the person in the picture as themselves. Facebook, therefore, is a self-enhancer's paradise, where people can share only the flukiest of flattering photos, the cream of their wit, style, beauty, intellect and lifestyles.

It's not that people's profiles are dishonest, says Catalina Toma of Wisconsin-Madison University, "but they portray an idealised version of themselves". People are more likely to lie out and out on dating websites, to an audience of strangers.

A study Toma conducted this year found that admiring one's own Facebook profile has palpable self-affirming effects, and that people naturally gravitate to Facebook for a boost when their ego has been knocked. Her unwitting participants were asked to carry out a public-speaking task, only to receive crushingly negative feedback.

Half of the subjects were allowed to peruse their own Facebook profiles before receiving the feedback, and this group turned out to be less defensive than the others. Instead of accusing their evaluator, for example, of incompetence, they said: "Yeah, there's some truth to this feedback. Maybe there are things I can do to improve my performance."

Toma asked yet more participants to give the same speech, only this time she gave them either neutral or terrible reviews. They were then presented with a choice of five (fake) further studies to take part in – one involving logging on to Facebook and four decoys.

"We were excited to find," she says, "that when participants' egos were threatened, they chose Facebook at twice the rate than the others" – ­evidence of what she calls "an unconscious mechanism to decide to repair feelings of self-worth".

Whether self-enhancement is healthy is often-debated, says Epley. "Taking it to an extreme, you get delusional kinds of self-enhancement, but in moderation, of the kind we often find, it's probably not a ­terrible thing for you." – © Guardian News & Media 2013

Amy Fleming
Amy Fleming works from London, England. Irish ☘️ storytelling vegetarian feminist a.k.a the fun aunt at parties. Repped by @act_ups_agency Next Up: A Wake in Progress at Edinburgh Fringe Amy Fleming has over 1290 followers on Twitter.
Facebook
Twitter
WhatsApp
Linkedin

Slice of life: I escaped my dark skin box

He told me I was ugly

Beautiful girls don’t deserve to die, so who does?

Searching for beauty that makes you feel alive