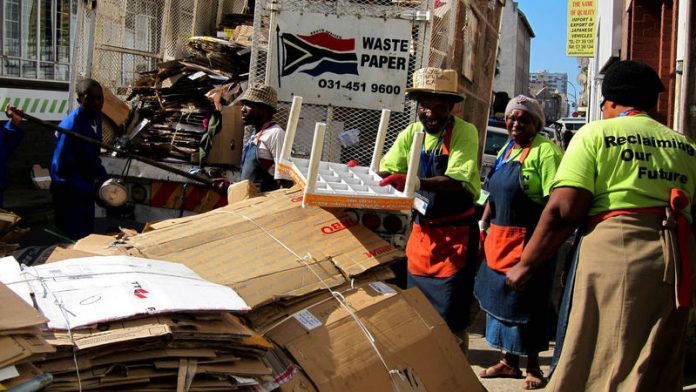 Durban's street recyclers collect trash for cash and play a valuable role in society by extracting recyclables from the waste stream.

In Palmer Street alone, recyclers collect an average of just over a tonne of recyclable materials a day.

Research shows this equates to saving 17 trees and saving 3m2 of landfill space.

It is supported by non-profit organisation, Asiye eTafuleni, and has to date increased income for recyclers by up to 60%.

Tasmi Quazi, the project's research officer, says uniting recyclers under one umbrella in Palmer Street has led to better relations with formal businesses, municipal officials and the general public.

"The eThekwini municipality has been supporting the role of informal recyclers through up-scaling initiatives of the project and is developing a recycling station specifically for the Palmer Street recyclers," says Quazi.

There are about 500 informal recyclers operating in Durban central, moving up to 15 tonnes of recycling a day.

Quazi says their efforts contribute towards the municipality's zero-waste strategy.

"This is in the context of changing global priorities towards climate change mitigation and growing pressures to increase recycling rates significantly."

The project also makes recycling a "viable and dignified livelihood. It supports informal recycling as a low-barrier green job and targets the most marginalised in society who have no educational experience or formal skills training, and low-income prospects".

"Through this project, recyclers progressively gained greater voice, visibility and validity. The objective has been to support informal recycling as a safe and dignified occupation with viable income levels."

Many of the recyclers have gained access to social workers, who provide counselling services in "dealing with dispute resolution, substance abuse issues and bereavement. They have also helped with savings accounts and retrieval of ID documents", says Quazi.