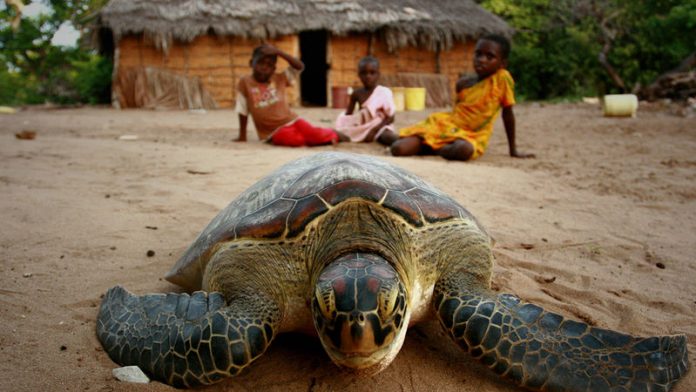 Five years ago young South African scientists Mike and Linda Markovina set off in their 4×4 to explore 42 countries. Their aim was to find people and projects making a difference in marine conservation despite the current abuse of oceans worldwide.

They put together the Marine Transect Expedition to discover inspiring people and international solutions to fisheries management and conservation.

Working with a team of scientists, entrepreneurs and media specialists, they have created the first baseline dataset using low-cost stereo-imagery technology to survey the coral reef fish of East Africa spanning 27 degrees of latitude.

"The name Moving Sushi was first etched in vinyl in 2008 along the body of a very new-looking 4×4 as we prepared to head out. For two years we documented in video and photos the inspirational stories of people who are doing things right, which is often overlooked," says Mike, who has an MSc in ichthyology and fisheries science.

The data, which is currently being analysed, will indicate abundance and diversity measures as well as indicators regarding coral reef damage and over-fishing.

Moving Sushi will present its findings at the Western Indian Ocean Marine Science Association so that it can be used as education tools at all levels.

A four-part documentary series will also showcase its work through international broadcast.

"Our goal is to conduct five expeditions, based on the essential questions that require immediate information. Our next expedition, planned for 2014, will be off the West African coast where we hope to use new cost-effective contextualised technologies to explore the state of fisheries within the region," Mike says.

Moving Sushi is a self-funded initiative based on a dream to inspire a new era of marine exploration that links science and social context through open-source access and profound imagery.

"If you have ever had the experience of free diving with a marlin in the blue, if you have ever looked over the complexity of a coral reef, swum next to a whale, or listened as a leatherback digs her nest, you can only be encapsulated by the sheer magic, the intoxicating effect of mystery and wonder," says Mike.

Aiming to combat illegal fisheries in Africa, he says he can see how relentless human actions are devastating marine resources. He has managed to remain upbeat about what is left.

"It is not what defines a fish that is important. It is not just a scaly, cold-blooded beast — it represents cultures, traditions, superstitions, livelihoods, hopes, dreams. The oceans are our last frontier on earth that we know very little about."

He adds that the dependence of over a billion people on fish as their source of protein is in jeopardy and that a fundamental misconception regarding fisheries management is that fish have to be managed.

"This couldn't be further from the truth. It is people who need to be managed. The collapse of global fisheries is a socioeconomic catastrophe, one which the global economy can ill afford," says Mike.

No single nation has the capacity