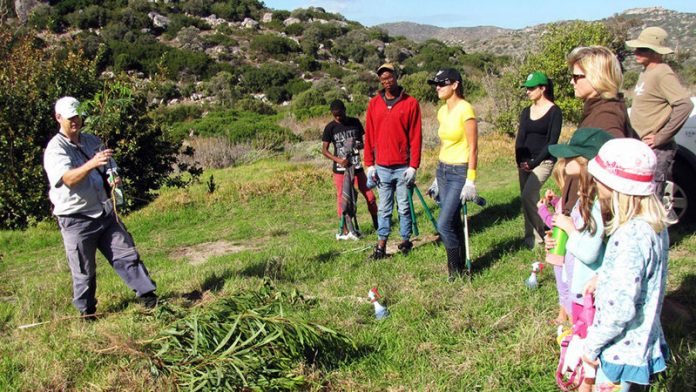 Some hotels hinge their green efforts by asking guests to reuse towels, but the Vineyard Hotel & Spa steps into the environment to make a difference.

This Cape Town hotel runs the Adopt-a-Plot project, which helps with the clearing of alien vegetation in the Silvermine section of the Table Mountain National Park.

Hotel staffer Chris van Zyl, one of the project leaders, says after the hotel was accredited as environmentally friendly, it looked for a suitable community sustainability project to support.

Adopt-a-Plot was launched to clear alien vegetation on an 8.5ha piece of land in Silvermine and to maintain it. This seemed logical for a hotel "strategically positioned with a magnificent view of the eastern slopes of Table Mountain", says Van Zyl.

"We were put in touch with Sandy Barnes of the Friends of Silvermine Nature Area, who co-ordinated a project in conjunction with South African National Parks. Sandy allocated the plots and supplied us with loppers and hand saws," says Van Zyl.

The hotel wanted a challenging project, but one that was easy for its staff to access.

"We wanted to be involved in an ongoing project where we could measure our effectiveness and see the results of our efforts. Adopt-a-Plot was ideal," he says.

Van Zyl and the hotel team cleared the site of alien vegetation by October last year. They subsequently cleared an additional site in Hout Bay.

"Over the past seven years we have visited the plot 52 times and in excess of 951 staff, family, friends and hiking club members have actively participated in the alien clearing," says Van Zyl.

The impact of their work is that the area is cleared for those who hike and do trail running in Silvermine. They have also recruited hiking clubs and youth groups to get involved in alien vegetation clearing.

"It is very rewarding to see young children of six or seven years old pulling out alien plants and stockpiling the invaders while having fun in nature. "The older teenagers are given tools to assist them in eradication of the invaders," says Van Zyl.

Where to from here for the hotel and hospitality industry?

Let’s get some rest