No more SABC for Zimbabwe 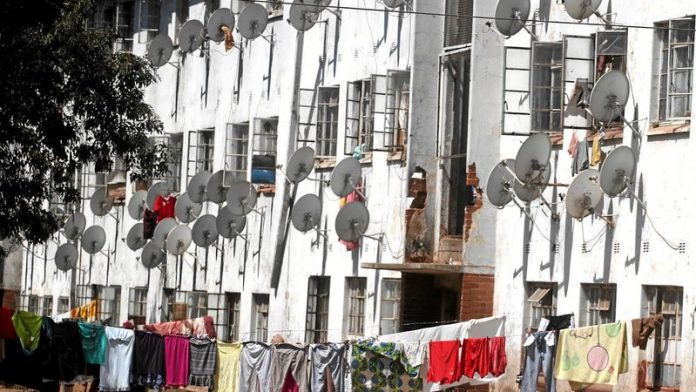 Zimbabweans make no secret of their intense hatred of local broadcaster Zimbabwe Television (ZTV). But now they have no alternative but to watch it after the South African Broadcasting Corporation (SABC) switched off access to its channels.

For years, about three million locals have used free-to-air decoders to watch all three SABC channels, mainly in protest against programmes on ZTV that they say amount to propaganda and are also of poor quality.

ZTV, the sole television station operating in the country, is state-controlled and is owned by the Zimbabwe Broadcasting Corporation (ZBC).

Decoders, including Wiztech, Philibao, Fortec and Vivid, became especially popular among low-income groups. The decoders allowed free access to certain channels, including the SABC's channels, with no subscriptions.

The decoders are a common site in rural areas, farming communities and urban townships. In Mbare, Harare, one can find as many as 50 satellite dishes at one hostel. South African soaps such as Generations and Isidingo enjoy a huge following in Zimbabwe.

The disconnection followed a ruling by the Johannesburg High Court last year ordering Sentech, a South African television signal carrier, to encrypt its signal within three months after eBotswana, a subsidiary of South Africa's e.tv, asked Sentech to scramble its signal due to signal piracy.

Complaints
The move left viewers with no choice but to revert to watching ZTV. Those who can afford it will move to the more expensive Digital Satellite Television (DStv), which is offered by Multichoice.

A large number of Zimbabweans this week took to social media sites to express their displeasure over the withdrawal of the South African channels on the free-to-air decoders.

"It came as a complete shock. Of course, last year there were rumours that SABC 1, 2, and 3 would be cut off but as time lapsed we thought the rumours were false. I'm totally gutted. I had become a keen follower of Generations, Muvhango and Zone 14, so it will be difficult to adjust to ZTV," said Mildred Mhondera, a resident in Mabvuku who said she had been watching South African channels since 2008.

"The channels were withdrawn at a terrible time — just before elections — so you can imagine the amount of propaganda we will be subjected to. Zanu-PF will be rejoicing because of this move," she said.

In addition to complaints of propaganda, people who spoke to the Mail & Guardian also complained that ZTV airs too many talk shows on limited subjects of farming and histories of ethnic groups, bland Korean movies, little international news and has an obsession with Chinese news channels.

Media Institute of Southern Africa Zimbabwe director Nhlanhla Ngwenya said the SABC had become not only a major source of quality entrainment for millions of Zimbabweans, but an outlet of alternative news on events taking place in Zimbabwe.

Demans for alternative channels
"And as the country heads for elections, the free-to-air satellite dish would have provided another angle on the management of the process than that provided by ZTV. SABC is also a potential channel through which political parties and civil society could air their advertisements given the tight controls and manipulation of ZBC," said Ngwenya.

Ngwenya said the timing of the switching off could not have come at a worse time due to pending polls.

"I am sure those in authority and those accused of obstructing the free flow of information to distort the realities on the ground are overjoyed by this turn of events because it snugly fits in with their tyrannical schemes".

Harare Residents' Trust co-ordinator Precious Shumba also said switching off the SABC channels was unfortunate and leaves the locals at the mercy of the ZTV monopoly.

"For years, Zimbabwe's civil society has been demanding the freeing of the airwaves to allow for the operation of private and independent broadcasters, and this decision by the SABC has increased the demand for alternative channels of broadcasting services," she said.

Shumba said that residents are already stressed about having to "endure long periods of partisan reporting and broadcasting services from ZBC's radio and television stations, which have a traceable history of denying citizens a platform to air their political views".

Shumba said few could afford DStv due to a stagnant economy. The cheapest DStv package costs $10 a month, and the most expensive is $75.

The unity government had resolved to end ZTV's broadcasting monopoly, but Zanu-PF has resisted implementing the agreement. The reform of the state broadcaster is one of the outstanding issues the opposition wants resolved before an election is held.