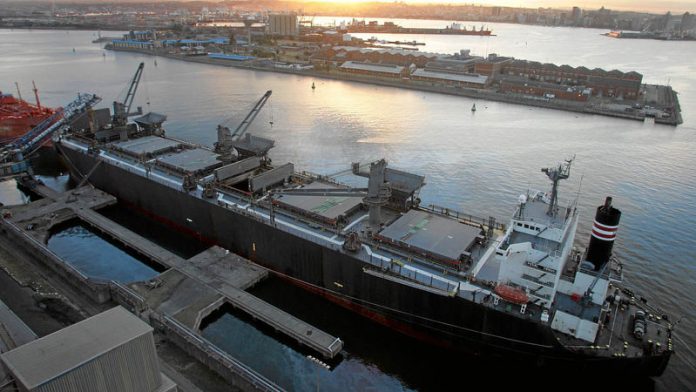 After completion, the Durban dig-out port will be the biggest in the southern hemisphere by far and will have three times the existing Durban port's capacity.

With demand increasing, time is of the essence — but the project faces several potential delays and legislative hurdles are just one of them.

Each year, more than 4 000 commercial vessels call at Durban, the busiest port in Southern Africa and, according to forecasts, container traffic is growing at 8% a year.

The current yearly volume of container trade through Durban is 2.69-million 20-foot equivalent units (TEU) of cargo, which is expected to grow to between nine million and 12-million TEU by 2040.

But the port is struggling to increase capacity to meet container handling and storage demand.

"No matter what we do, at the existing Durban port we will get a maximum capacity of 4.8-million [TEU]," said Marc Descoins, programme director of the Durban ­dig-out port project, which is seen as the answer to a wider holistic plan of infrastructural investment.

The new port will have a planned capacity of approximately 9.5-million TEU, counting ships coming into and leaving the port, although this depends on the design, of which three are currently under consideration.

The estimated cost of the new port is R75-billion, although it could go up to R100-billion.

Funding presents a number of challenges, and the inevitable involvement of the private sector may require legislative changes.

Transnet is on a capital expansion drive with R300-billion to spend, but the port is not part of it.

Public Enterprises Minister Malusi Gigaba said, when speaking at the official handover of the site last year, that implementation of the plan would require "real and meaningful partnerships between the public and private sectors in order to unlock their common balance sheets for the good of the country and our economy".

Port terminals can be leased out to private-sector players under the National Ports Act, which states that the main function of the National Ports Authority "is to own, manage, control and administer ports to ensure their efficient and economic functioning".

It is required to own, manage and control the land and infrastructure of a port.

Although a public-private model may fit in with the Act, a fully privatised model would require changes to legislation.

"There is lots of interest but we haven't officially gone to the market yet," Descoins said.

Investigations of the funding model should be completed by the end of October, he said. Thereafter, the market could be tested to determine investor appetite and concerns before the ideal model was identified and a request for proposal was put out.

The clock's ticking
But the clock was ticking and the timing was critical, Descoins said, because other ports were starting to challenge South Africa.

"If we don't proactively develop deep-water shipping facilities in response to key drivers, then South Africa will lose its relevance as a gateway into Southern Africa."

Changing legislation could present substantial delays, as could the environmental impact assessment, because the site takes in a mangrove estuary and is home to a vast variety of fauna and flora.

The new port is part of SIP 2: the Durban-Free State-Gauteng logistics and industrial corridor. As part of this, rail and road upgrades will also be necessary to match the port expansion plans.

Meeting the growing demand
Transnet is responsible for the development of the port but the project will be overseen by the SIP 2 steering committee and, ultimately, the co-ordinating commission.

Descoins said that, although the need to meet growing demand was one driver of the project, another was that container vessels had more than doubled in size in the past decade.

That had been driven simply by economies of scale — the cost per container and the carbon footprints of the vessels had led to them becoming larger.

The latest and largest ship today is the triple-E, which carries 18 000 TEU. As the BBC explains it: it is 400m long, taller than the London Olympic stadium and contains more steel than eight Eiffel Towers.

Of course, such ships are very constrained by the ports they can enter. They have draughts (the distance from the vessel's waterline to its lowest point) ranging from about 15m to 15.5m.

Controversy
The port of Durban cannot handle them, even after extensive and expensive berth-deepening projects, but the new port will be able to.

The site to be excavated is largely that of the old Durban international airport, which was recently bought and transferred from the Airports Company South Africa to Transnet.

But the project has not emerged without controversy: last year the Mail & Guardian reported that farmers in the Isipingo area had been leasing some of the old airport land for farming since the 1980s.

"Sixteen farmers and hundreds of labourers have been working the 187 hectares of land for almost 20 years," the report said.

"They are major suppliers of cheap fruits, vegetables and flowers to the South Durban community … This land will be reappropriated by the city for the new dug-out port and, naturally, the farmers are concerned.

"Sarojini Devi, one of the farmers, said the city hasn't even spoken to the farmers about what will happen with the land; they only read about the port plans in the paper."

Negotiations had begun in earnest to buy the other 31 properties that still had to be acquired, he added.

The site is also home to the crude-oil storage company Natcos, owned by both Sasol and Total.

Single-buoy mooring has also taken place offshore from the site for the past 13 years and will have to be moved.

Single-buoy mooring serves as a link between the shore facilities and tankers for loading or off-loading liquid and gas cargos. In this case, it is crude oil.

Avhapfani Tshifularo, chief director of the South African Petroleum Industry Association, said the proposed port was definitely going to have an impact on the single-buoy mooring and Sasol's crude oil tanks were also likely be affected.

"It is an issue that the industry is looking at very closely … There is but a proposal from Transnet — nothing firm at moment," he said.