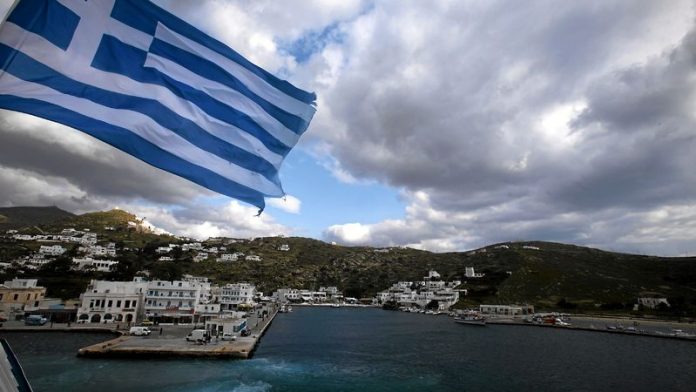 ­Long before the setting sun turns the sky above Mykonos into a blaze of crimson, they begin to arrive: super-yachts and pleasure boats and high-speed craft all vying for a spot in the Aegean isle’s picturesque old port.

“It wasn’t like this last year or the year before,” he says.

“There’s been a huge leap in the number of private and professional boats sailing in, and the tourist season has barely begun.”

Mykonos, the island made famous by Jackie Onassis, is braced to accept one million tourists this summer, but it is not only the international jet set descending on its shores.

The island’s economy may be in free fall, its people hit by the harshest peacetime austerity programme ever imposed on an advanced Western state, but Greece is back in business.

After three lean years marked by riots, strikes, social upheaval and political unrest, 17 million or so holidaymakers — 1.5 times the country’s population and an all-time record — are about to visit, according to officials.

The arrivals have never mattered more. Tourism accounts for almost 20% of GDP — and jobs. With recession-hit Greeks also struggling with a record level of unemployment, which has reached nearly 28%, the highest in the eurozone, industry earnings this year may well be the only income for many.

Up in the mini-resort that his father, Mykonos’s first hotelier, built back in the 1960s, Andreas Fiorentinos says Greeks have learned the hard way to appreciate the benefits of tourism.

“The crisis has taught us that we cannot fool our clients,” says Fiorentinos, taking in a spectacular view framed by bobbing yachts below.

“And it has made us more aware. People understand how important it is for our economy.”

An outdated model
Like many, the third-generation hotelier believes the time has come for Greece to reinvent itself. For too long, he says, the industry has been overly dependent on its image as a destination of sun, sand and sea.

“As a result of catering to price-sensitive tourists interested only in drinking and the beach, we have failed to tap into a whole market,” he sighs. “It’s an outdated model that has to change.”

Fiorentinos is also deputy secretary general of EOT, the country’s tourism board. “For the past year we’ve been visiting tourist expos around the world to convey the message that Greece is not only about souvlaki and Zorba the Greek. If it weren’t for our lumbering state we would have moved away from those stereotypes long ago.”

The efforts to appeal to a broader and more affluent audience — ­evident in the blossoming of five-star resorts, boutique hotels and gastronomic and cultural tourism — have not been easy.

Breaking old moulds has frequently been thwarted by corruption and vested interests, the twin ills blamed for bringing the country to its knees.

“It was considered the most important place in the ancient world. But do we show it off? No. Every day it closes at 3pm because the [state-run] archaeological service refuses to do otherwise.”

In the same vein it has taken nearly 20 years for Mykonos to get a new marina, seen as vital for attracting the fast-growing cruise tourism sector and niche commerce.

New routes to the country
This year’s sharp rise in numbers has been partly attributed to a 40% increase in travellers on cruise ships, mostly from the United States.

But it is not just Westerners who are fuelling this tourism boom. Seated in his air-conditioned Athens office, Andreas Andreadis, who heads the association of Greek tourism enterprises, Sete, says much of Greece’s new traffic arises from the lifting of visa restrictions in long-haul emerging markets such as China, Turkey and Russia.

Russian arrivals at regional airports alone have shot up by 230% this year. “In Moscow, 13 000 visas are issued for Greece every day,” Andreadis says.

“The volume is so high that Sete has employed 20 of its own people just to help stamp visas.”

Airlines have more than one million extra seats and scores of new routes to the country, including to places such as Mykonos.

“We are linked to 14 countries and 28 destinations. There are daily flights to London, Milan and Istanbul,” says Athanasios Kollias, the air traffic controller at the island’s newly expanded airport.

“From now on, 120 charters are expected every week. In May the number of passengers flying in from abroad more than doubled.”

Summer bookings to Greece from Germany and the United Kingdom have also soared.

Some of the 15% increase from Germany was attributed to the chancellor, Angela Merkel, because of her insistence on austerity, exhorting her compatriots to visit the country.

This month, Lufthansa chose Athens for the inaugural flight of its new flagship plane, the B747-8, the largest aircraft in the world.

For Andreadis the key to sustaining this boom is quality. And on Super Paradise beach, Mykonos’s favoured spot for the cool and trendy, the emphasis on improved service is everywhere to be seen.

There’s a champagne bar at one end and a massage tent at the other as holidaymakers lounge on new sunbeds, under new thatched umbrellas, and take in the turquoise waters below.

For people like Nikos Xydakis, who has run a beach taverna for the past 40 years, the new look is not just about survival.

“This year we had to do everything, even clean the beach because the state is in no position to help. But in life everything changes. The crisis has played a big role. Our tourists have changed and we have changed too.” — © Guardian News & Media 2013

Domestic travel is key to saving the tourism sector