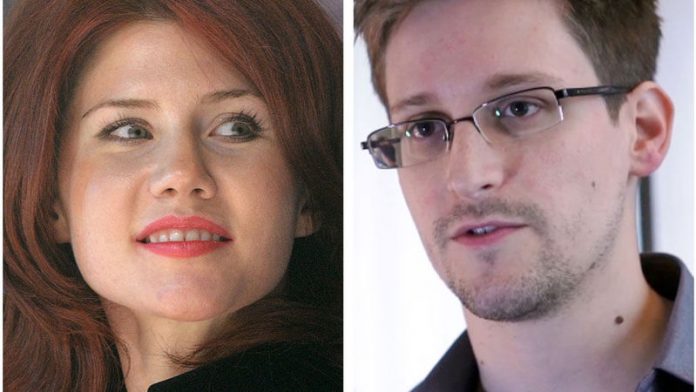 Anna Chapman has proposed marriage to US intelligence leaker Edward Snowden, in an increasingly bizarre turn of events that unleashed excitement in Russia.

"Snowden, will you marry me?!" the undercover spy turned media celebrity asked the world's most famous refugee on Twitter late on Wednesday.

Snowden, will you marry me?!

In a separate tongue-in-cheek tweet, she asked Snowden's former employer the National Security Agency (NSA): "@nsa will you look after our children?"

Snowden arrived in Moscow from Hong Kong on June 23 and has spent nearly two weeks in legal limbo in an airport transit zone.

Chapman was deported from the United States in 2010 along with nine other Russian spies in a major swap with Washington.

Russia's President Vladimir Putin's spokesperson Dmitry Peskov said  he was unaware if Chapman's proposal was serious and declined to comment further, noting he was not Chapman's "legal representative".

Her tweet unleashed a deluge of witty online remarks, with one commentator quipping that the prospective couple's children would all be "James Bonds and Mata Haris".

Snowden's legal status
An online cartoon depicted an auburn-haired woman and a bespectacled man being married in a civil ceremony, with an officiant legalising the union saying: "And only failure or exposure will bring you apart."

On a more serious note, a lawyer took to the airwaves to discuss the possible union, while the Interfax news agency, citing a source familiar with the situation, said on Friday Snowden's legal status would change if he tied the knot with the Russian.

"In this case, Snowden would have legal grounds to request Russian citizenship and therefore receive state protection from his new country of residence," the source was quoted as saying.

But the consular service at Sheremetyevo Airport where Snowden has been marooned, said it did not legalise marriages.

The 30-year-old, who is seeking to evade US justice for leaking details about a vast US electronic surveillance programme, has been unable to leave Moscow after Washington revoked his passport. – AFP