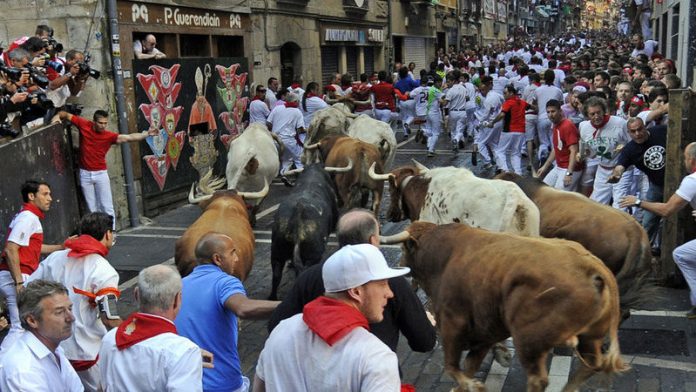 Six huge bulls and six steers on Sunday carved a path through masses of runners dressed in white with red scarves around their necks and packed into the winding, cobbled streets of the northern Spanish city.

Hundreds of people ran with the bulls, some of which skidded as they charged in four minutes and six seconds from a holding pen along an 848.6-metre course to the city's bull ring, where they will be slayed in a bullfight.

Many people dared to touch the charging beasts on their sides or even to run just a few steps in front of the bulls' horns as thousands of spectators looked on from the sides or from overhanging balconies.

A medical report from regional medical authorities showed four people taken to hospital with light injuries and no gorings: a 24-year-old Australian, a 44-year-old Briton, a 26-year-old American and a 36-year-old resident of Pamplona.

But one lone tan-coloured bull gave runners a fright when the animal hung back and stopped just before the bull ring as its way forward was blocked by people.

The bull turned around to face a dense crowd that had built up behind it, sending panicky runners scrambling over wooden fence barriers for safety.

Desperate to prevent the bull from charging into the crowd, herders with long sticks finally enticed the bull into the ring.

Nine days of thrill-seeking
The daily bull runs are the highlight of a nine-day mix of partying and thrill-seeking, which draws hundreds of thousands of people from around the world.

The festival in this city of 200 000 residents was made famous by Ernest Hemingway's 1926 novel The Sun Also Rises.

The bull runs are believed to have started when butchers began running ahead of the beasts they were bringing from the countryside to the San Fermin festival.

Last year 38 people were taken to hospital, including four men who were gored by bulls.

Several hundred more were treated for minor injuries at the scene.

Most of the injuries are not caused by bull horns but by runners falling or getting knocked over or trampled by the animals.

Fifteen killed
Fifteen people have been killed in the bull runs since records started in 1911.

The most recent death took place four years ago when a bull gored a 27-year-old Spaniard in the neck, heart and lungs.

The festival has not escaped Spanish recession. Pamplona city hall has slashed the budget for the fiesta this year by 13.8% to $2.7-million. – AFP