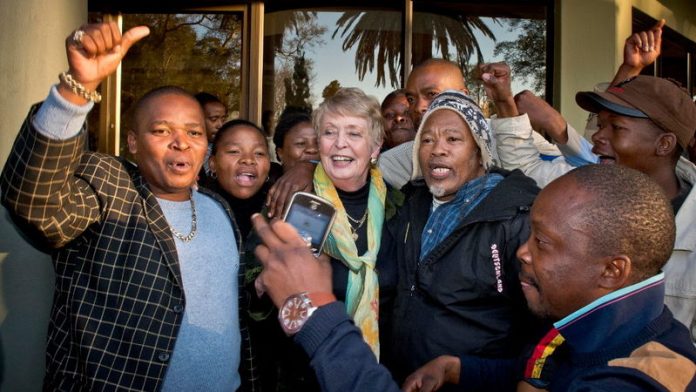 ANC spokesperson Ishmael Mnisi, who was in Tlokwe during Thursday’s announcement, said the party was confident it would reclaim power in the municipality.

The provincial ANC has filed an application in the North Gauteng High Court in Pretoria, challenging the validity of the July 3 council meeting that voted ANC mayor Maphetle Maphetle out.

Fourteen ANC councillors were expelled after the party accused them of working with the opposition to replace Maphetle with Democratic Alliance councillor Annette Combrink.

The DA will file its opposing court papers on Friday.

“Though the ANC has marketed this as an application by the ANC, we know it’s the [former] mayor and speaker who filed that application,” said Hattingh.

“What’s concerning us is that there are clear indications that they’re using the taxpayers’ money.”

Defiance act
Desmond Carolus, one of the two Tlokwe councillors, who apologised to the ANC disciplinary committee over a week ago for voting with the DA, addressed the Thursday press conference and expressed regret at the defiance act he was involved in.

Meanwhile, expelled councillors said the ANC is not interested in hearing their side of the story about what happened on the day Maphetle was voted out. They deny voting with the opposition, saying they abstained from voting.

“The community held us hostage, they forced us to stay in the meeting,” said ward one councillor Evelyn Moloi.

“I told the community members I can’t allow a DA member to take an ANC seat. I just sat there watching proceedings, but Supra [ANC North West provincial chairperson Supra Mahumapelo] has not heard our side of the story.”

Moloi claims a group of community members arrived at municipality offices and blocked ANC councillors from leaving, in an effort to force the party’s leadership to listen to their grievances.

Community leader from Moloi’s ward Vally Sizani confirmed that councillors were forced to attend the meeting.

“We promised to beat them if they left the meeting. I was carrying a golf stick and I was prepared to use it. We knew that when Maphetle is removed the ANC will come running, and they did.”

Even though expelled councillors claim they did not vote for the DA, figures released by the DA show that 29 councillors voted for Combrink to take over the municipality’s leadership. With the opposition having 22 councillors in the 52-member council, this means seven ANC councillors chose Combrink.

By-elections are expected in September to fill ward councillor positions created by the firing of ANC deployees.

The DA and the ANC can now only wait for the outcome of Tlokwe by-election voting after a fierce battle for control over the municipality.
Read more
National

As former Tlokwe mayor Maphetle Maphetle takes up a post in the North West legislature, the ANC in the province has denied he was redeployed.
Read more
National

ANC Tlokwe chief whip Dakota Legoete says a municipality meeting in the North West had to be halted after the DA staged a walked out.
Read more
National

The ANC has allegedly attempted to re-take control of Tlokwe by "sneaking in" a motion of no confidence in DA mayor Annette Combrink.
Read more
National

The Democratic Alliance is confident it will come out on top, despite the ANC winning eight out of nine wards last month
Read more
Advertising
Continue to the category
Politics