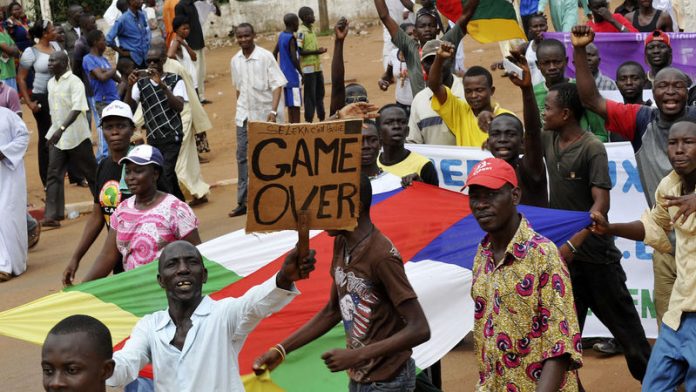 The CAR barely qualifies as a country. The descent into hell for many of the 4.5-million people living there is going almost unnoticed.

The CAR already has the second lowest life expectancy in the world – 48 years. For years its infant mortality rate has been three times higher than the level used to define a humanitarian crisis. New figures present an even grimmer picture. This week, a group of five non­governmental organisations still operating there held a press conference to highlight the country's plight. Highlights from the list of what's gone wrong since the rebel group Seleka took over include a 40% increase in malaria cases this year; at least 70% of HIV-positive patients are no longer receiving their medication, and 50% of those suffering from TB are also no longer receiving treatment.

MSF says the United Nations has adopted a "wait and see" attitude. MSF president Mégo Terzian says the UN and other donor agencies are waiting for the situation to improve before deciding what to do next, adding that the UN Security Council isn't going to take any action until there's an African response to the crisis.

Four months have elapsed since then-president François Bozizé was overthrown in a military coup by heavily armed Seleka rebels, led by the current president, Michel Djotodia.

Since then, neither Djotodia nor the regional peace force, Fomac, have managed to disarm the rebels or stop them from looting and – far too often – killing civilians.

The International Crisis Group's Central Africa expert Thierry Vircoulon attributes part of the problem to the make up of Seleka.

"It is neither a political party nor a government structure." he said. "The big difference between the Bozizé coup d'état and Seleka's is that Bozizé came from the state … Seleka is only made up of armed groups from the northeast of the country."

Seleka security chief Noureddine Adam, the man most CAR watchers see as the real power in Bangui, told current affairs magazine Le Nouvel Observateur that he could restore  order within a month if he could kill 100 people in order to dissuade others from breaking the law, but then, possibly realising that he should qualify such a statement, added: "But we respect human rights."

While few tears were shed when Bozizé was ousted, it is not an exaggeration to say that there has never been a less-popular administration in Bangui than Seleka. There are rumblings of an imminent attempt by Bozizé to get his old job back.

After having gone missing a few weeks ago, allegedly while on his way to South Africa, he is now reported to be in South Sudan, not far from the border of his home country.

Unless he receives significant ­outside help, his return to power is unlikely. Bozizé's two closest allies while he was president, Chad's Idriss Déby and South Africa's Jacob Zuma, no longer take his calls.

On Monday, CAR Prime Minister Nicolas Tiangaye travelled to the African Union headquarters in Addis Ababa to ask for help. AU commission head Nkosazana Dlamini-Zuma told him she was trying to convince member states to contribute troops to provide security in the CAR.

Meanwhile, the new head of the UN observer mission in the CAR, General Babacar Gaye, arrived in Bangui on Tuesday. Gaye says he'll be meeting with politicians, members of civil society and regional partners in the next few days.

Locals can be forgiven if their expectations of a UN solution to their ­crisis are low to nonexistent.