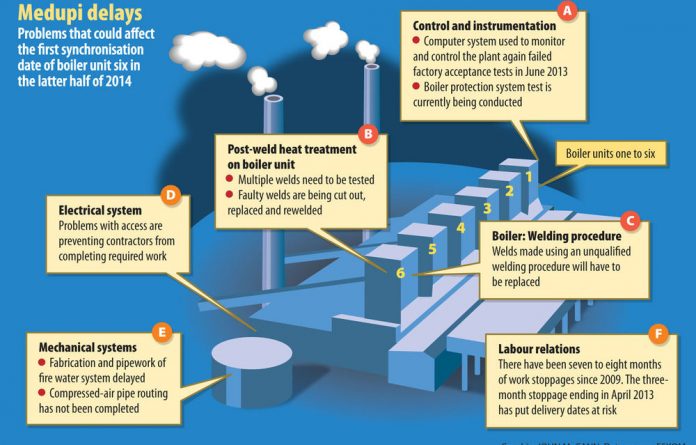 During a high-profile site visit on April 11, Public Enterprises Minister Malusi Gigaba advised Eskom, Alstom and Hitachi executives that first power from Medupi Power Station by no later than December was absolutely critical, that no further delays would be tolerated, and that "heads would roll" if any delays occurred.

The Eskom chief executive and his executive team assured the minister that the situation had been analysed, that the problem areas had been identified and were being dealt with, and that the due date would be met.

This was followed by press releases from nonperforming contractors Alstom and Hitachi, confirming their undertakings and commitments to meet the deadline, as well as a press release from Eskom that a new site-wide labour agreement was being put in place.

But three months later, at a media briefing on July 8, Eskom confirmed what was already generally known — that the due date of end December was increasingly unlikely and unrealistic. Eskom indicated that "a more realistic target for the first synchronisation of unit six to the grid is the second half of 2014", a somewhat vague "commitment" that could lie somewhere between July and December 2014.

And full power into the grid is not the same as stable and continuous commercial base-load power — that typically takes another six months of extensive testing and attention to problems arising, during which time power from the generation unit may be significantly intermittent.

Additional costs
While advising on the revised date for first power from Medupi, Eskom announced an increase of R14-billion (which is 15%) in the price tag of the construction cost of the power station, from R91-billion to R105-billion.

This excludes interest during construction of about R35-billion and about R10-billion for a flue gas desulphurisation plant still to be procured. It brings the price of Medupi to R150-billion and makes it one of the most expensive base-load coal-fired power plants in the world.

Eskom has indicated that it would make every effort to claw back these additional costs through contractual remedies, penalties and civil action for damages against its nonperforming contractors.

However, this is easier said than done. The issues are invariably not clear-cut, with finger-pointing, claims and counterclaims of delayed access, scope of work changes, labour unrest preventing access or leading to work stoppages, and numerous other factors that serve only to muddy the water in the blame game.

Eskom has called in Alstom's performance bond for the control and instrumentation contract and is considering other options, which could include changing to an alternative supplier for the software.

The nature and extent of the construction of the six boilers in the power station makes a change in boiler supplier inconceivable at this stage, and Eskom has indicated it is not considering an alternative boiler supplier for Medupi or the Kusile Power Station.

In addition, Eskom said it does not intend calling in Hitachi's performance bond, but would instead seek to strengthen its financial securities from Hitachi until the end of the contract.

Economic impacts
Already more than three years late by mid-2014, the remaining five 800MW generation units at Medupi are expected to come on stream at six- to nine-month intervals following the first unit. Medupi should have had 2 400MW of commercial power on stream by now, and 3 200MW by the end of 2013.

In the meantime, as a result of the latest delay, Eskom has announced an additional supply shortfall of 700MW that has to be managed until the first unit at Medupi comes on stream with stable base-load power sometime between the end of 2014 and mid 2015.

With demand expected to rise in 2014, and plant availability on the remainder of Eskom's ageing power generation fleet expected to decline, this spells trouble.

Supply-side options, such as operating the open-cycle gas turbines in the Western Cape as a mid-merit power plant, are limited and expensive.

Demand-side options, such as paying ferrochrome smelters not to produce, or compensating large and medium customers for additional costs to run their own standby generators, also incur significant costs.

The delays themselves, and the base-load power capacity shortages resulting from the delays, are having adverse economic consequences.

The additional project costs, and the costs of supply- and demand-side management measures, are ultimately borne by the customers of electricity in South Africa through higher than normal electricity tariffs, which are inflationary.

Accountability
A R150-billion engineering, procurement and construction project of this size, with about 40 main contractors, hundreds of subcontractors and about 17 000 workers on the construction site, is fraught with financial, contractual, labour, safety, technical, completion time and performance risks, and requires close project management, co-ordination and attention at all levels.

Eskom elected to place all major contracts directly itself rather than place a single turnkey contract.

The utility, therefore, assumes the lead role, with overall responsibility and accountability for managing, co-ordinating, integrating, commissioning and delivering the project on time and within budget.

The utility also takes on the overall responsibility for site-wide labour agreements to ensure sound labour relations across its construction site.

After initially insisting that the labour issues on site were not its problem, but matters between its contractors and their own labour, Eskom appears to have belatedly come to the realisation that, whether it likes it or not, in its own and the national interest, it had to intervene to ensure fair, consistent and acceptable treatment for all workers on the Medupi and Kusile sites.

Eskom also appears to have accepted that it must play a proactive and attentive project management role with its contractors, including quality assurance and management, and that it cannot simply assume that apparently reputable and competent contractors will simply perform at the expected standard.

Unfortunately, Eskom seems to have come to these realisations late in the project after experiencing serious technical problems and delays on critical contracts, and serious labour unrest and work stoppages due to long-standing grievances that were not given adequate or timeous attention at the highest level.

After the threat by Gigaba that heads would roll if there were any more delays beyond the deadline of first power from Medupi by the end of 2013, and the acceptance by the responsible executives at Eskom and its nonperforming contractors that the date would be met, the minister has been placed in an untenable situation.

Empty threats encourage a lack of accountability and perpetuate perceptions that cost and time overruns on critical public-sector projects are both normal and acceptable.

Chris Yelland is an energy analyst and the managing director of EE Publishers (eepublishers.co.za)