When mother is snatched away, Gogo picks up the pieces

"She left me with so many children," says  Sophie Hlophe*, as if thinking out loud. The 69-year-old is sitting in the living area of the two- bedroom RDP house in Katlehong, a township east of Johannesburg, that she shares with her husband and five grandchildren.

"What will I do with all these children? I can't even scold them – children nowadays are very naughty. They need someone who will be patient with them. What will I do?"

Four years ago, Hlophe was standing in front of the sink in her small kitchenette mixing formula powder with hot water in her grandson, Themba's* bottle. The infant was agitated because his mother had been admitted to Natalspruit hospital the previous day.

Before she could tend to the restless bundle squirming on her bed in the room just a few steps away, Hlophe's cellphone rang. It was a nurse from the hospital: "Your daughter is dead," she said.

Hlophe was shocked. The 37-year-old Sonto*, her youngest daughter, was fine just a few days before.

"I had no idea how this could have happened," she says.

Sonto had not had any health problems and seemed to be recovering well from her baby's birth.

But, three weeks after having Themba, she developed a cough that only got worse. Three days later, her brother and a relative who lived nearby offered to take her to the hospital in an old white bakkie.

With Sonto's toiletries packed, they helped her into the back. Hlophe and Themba joined them. Sonto's four other children stayed at home with their grandfather. The old car rushed through the crowded township streets to the nearby Natalspruit hospital where, Hlophe expected, her daughter would get well soon. Instead, the phone call.

Four years later
Today, on a cold winter's morning, Hlophe's home is filled with the sound of cartoons on the television and her grandchildren lazing around on the worn-out couches: Sonto's children are now four, nine, 12, 13 and 22 years old.

Putting on a brave face, Hlophe leans back against the rest of the steel-framed chair in the modest living space of her home.

Themba, now four years old, plays aimlessly on a red carpet. Shy eyes peep out from under long lashes as he pretends not to listen to his gran talking about his mother's death.

"Life has been very difficult since my daughter left us. Though she was not formally employed, she took care of her children with the money she made as a traditional healer," said Hlophe, taking a small black container of snuff out of the right pocket of her woollen jersey.

Years have passed but Hlophe is still uncertain of the cause of her daughter's death – nobody ever explained this to her.

"My daughter often complained of pain at the back of her neck, stress and high blood [pressure]."

On the day Sonto was hospitalised, Hlophe overheard doctors saying she died from "nerves".

Masechaba Lehoko is a social worker with a local home-based care organisation, Kwenele Place for New Hope. She has been helping Hlope to access social grants for her grandchildren. She suspects that Sonto died of pregnancy-related hypertension, also known as pre-eclampsia. She says in some cases maternal deaths are recorded as being from "natural causes" without specifying what the cause is.

Lehoko, who works with 20 families in the township, says hypertension is a major problem in the community, especially among pregnant women, because they often delayed going to antenatal clinics.

"This weekend, gogo's [Hlophe's] neighbours will be burying their 17-year-old daughter, who was seven months pregnant. She, too, died of pre-eclampsia," Lehoko explains. "The baby didn't make it either. She complained of high blood pressure, dizziness and her legs were swollen, but she never went to the clinic."

Health department statistics show that every year about 310 out of 100000 women die in South Africa during pregnancy, childbirth or within 42 days thereafter.

Last year, the department released a report on maternal deaths. At 14%, pre-eclampsia was the third most common cause of maternal mortality after HIV (40%) and excessive bleeding (28%). 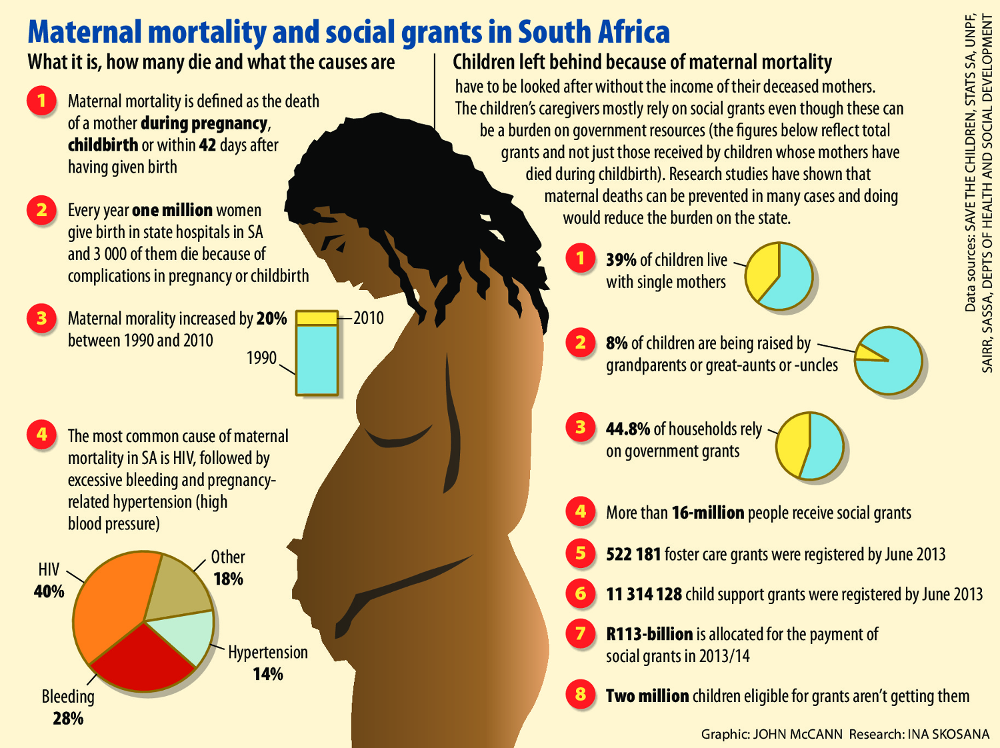 Pregnancy a "dangerous" time
Maternal health specialist Eddie Mhlanga says pregnancy and childbirth are dangerous periods in a woman's life. Mhlanga says Sonto may have died of a heart condition caused by pre-eclampsia.

According to Mhlanga pulmonary embolism, a blockage of the arteries in the lungs caused by a blood clot that moves from another part of the body such as the leg or pelvis, could also have caused Sonto's death. Lehoko says the impact of maternal deaths is most visible in homes where grandparents are left to take care of young children.

"It's a difficult situation because grannies don't work any more and they rely on their pension," she says. "The child support grant provided by government isn't enough to raise a child on, but most grandparents aren't aware of foster care grants."

The child support grant is a monthly payment of R290 to a child's primary carer. The foster care grant, which is R800 a month, requires court documents proving legal guardianship.

Because Themba's mother died before she could officially register his birth, Hlophe had the infant registered under her surname, which made it easier to access a foster care grant for him. But it took her almost three years after her daughter's death to access grants for her three other grandchildren.

"At first, the social workers couldn't understand that the children's mother had died and because we don't know where their father is, we get no assistance from him," she says. "But I got them registered, eventually. Now that I get their grant money things are looking better."

Survived by "God's grace"
Leaning forward in her seat, Hlophe puts pinches of the brown tobacco snuff powder into each of her nostrils.

"We survived by God's grace. He will never lead us astray. He does everything with a purpose," she says, blowing her nose into a piece of white cloth. "My children and I had it rough. I fed them pap, water and sugar. Now here they are, all grown up."

Despite having to sustain a family of seven on a combined income of R4200 a month, Hlophe doesn't compromise her grandchildren's wellbeing.

"Three days after I get paid I have no money left because we have to buy groceries and meat and polony and Danone [yoghurt] … All these things that make them happy."

Hlophe cranes her neck to peer through the tiny living room window. Her neighbours are awaiting the arrival of their daughter's corpse for the burial.

"Death is always hard to deal with," she says. Her own grandchildren are still battling to come to terms with their mother's death.

"They don't understand when I say she is with God – they don't go to church any more," says Hlophe as a glimmer of tears well up behind her thick-framed glasses. "When you pray, they leave the room saying ‘I wonder who will die now'."

* Names have been changed

For an in-depth look at the impact of HIV and public health system failures on maternal mortality, read one of our previous stories on the issue.