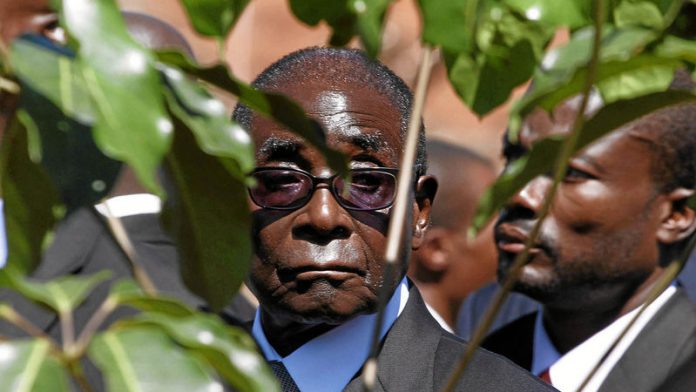 Zimbabwe's President Robert Mugabe (89), clad in a white church robe and holding a biblical staff on Saturday, appealed to thousands of members of a church in eastern Marange to support his bid for re-election after 33 years in power.

The veteran leader will go head to head at the ballot box with longtime rival Prime Minister Morgan Tsvangirai.

The vote will end the pair's tense power-sharing government that was forced by the chaotic 2008 polls.

Speaking in the diamond rich area, about 200 kilometres east of the capital Harare, Mugabe pushed his message of indigenisation of the economy.

Mugabe also attacked gay marriage, saying it was alien to Africa and criticised US President Barack Obama for urging Africa to respect gay rights on a recent visit to the continent.

'Weddings are for a man and a woman'
"You heard it when Obama came to Africa saying Africa must allow gay marriages, even women to marry each other so they can wed if they want," he said.

"God destroyed the earth because of these sins. Weddings are for a man and a woman, who when married they bear children," he said.

Mugabe who once said gays and lesbians are worse than pigs and dogs, said animals are better off because they know their sexual orientation.

Meanwhile, the Zimbabwe Electoral Commission (ZEC) on Saturday vowed to announce the results of the July 31 presidential polls within five days of voting.

Officials had delayed announcing election results in 2008 for six weeks when Mugabe came second to Tsvangirai in the first round of the leadership race.

"The fifth of August is the date on which, come hail, come thunder, we must announce the results. That is what the law says," said Rita Makarau, chairperson of the ZEC.

Under a new Constitution, the ZEC must announce the results of the presidential election within five days of voting, but results for members of Parliament are issued earlier, she said.

In 2008, Tsvangirai's first-round lead fell just short of an outright majority but Mugabe went on to be declared the winner of a presidential run-off – which Tsvangirai had pulled out of in protest over violence. – AFP