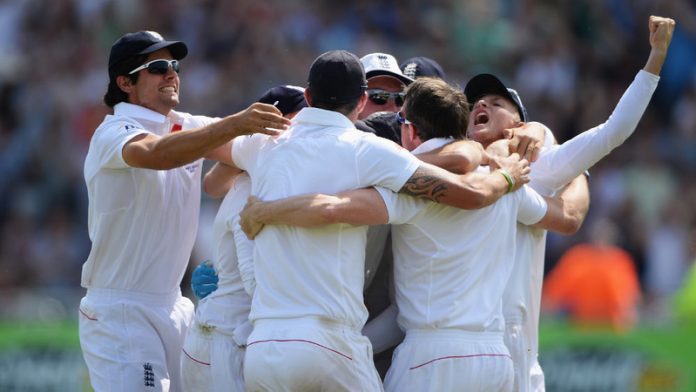 Cricket's decision review system and the continuing struggles of Australia's brittle batting order bore the brunt of frustrations Down Under after the tourists' heartbreaking 14-run defeat in the first Ashes Test.

The DRS, roundly criticised throughout the seesawing clash over five days, ultimately decided the match in Nottingham on Sunday when the technology picked up a nick from wicketkeeper Brad Haddin that umpire Aleem Dar had failed to detect.

The caught-behind decision captured Australia's final wicket and justly handed England a 1-0 lead in the five-test series, but the manner of victory left many purists cold.

It also left local media seething after England tail-ender Stuart Broad was allowed to remain at the crease when Dar missed a thick edge, a costly oversight that Australia were unable to appeal, having used up their DRS quota.

"Dar gave [Broad's] most obvious of edges not out and Australia had used both its reviews so the decision stood.

"This is wrong. The DRS was originally introduced to get rid of the howler but in this match all matter of margin calls were judged by technology while the howler stayed.

"Until cricket finds a way of using technology to get rid of the howler then the game will continue to make a fool of itself."

Emotional manDespite the controversies, which also saw England batsman Jonathon Trott out lbw after the operator of the "Hot Spot" technology failed to analyse the correct delivery, both captains backed the system and said it had not influenced the result.

England skipper Alastair Cook, who had two referrals in hand when Haddin was dismissed, said the use of the review was a skill in itself.

"We in Australia have acted more on impulse. Michael Clarke is a very emotional man … I think Australia needs far more calculation than what they have at the moment," Craddock said.

Wicketkeeper Haddin was Australia's leading second innings scorer with 71, and teenage spinner Ashton Agar top-scored in the first innings with a brilliant 98 on debut at number 11, but their heroics underlined the failings of the team's established batsmen.

Mission impossible
After moving to 84 without loss in pursuit of 311, Australia lost six wickets for the addition of 80 runs to leave Haddin and the tail facing a veritable mission impossible.

Batsman Ed Cowan's twin failures through rash shots in both innings came in for a storm of criticism and some media called for the exiled Dave Warner, set to tour Africa with Australia A after punching England batsman Joe Root in a boozy bar-room incident, to be quickly re-instated.

"Australia came so close despite some major deficiencies in its top order," the Sydney Morning Herald newspaper said.

"They are major deficiencies that have been bubbling along and band-aided for several series. Major surgery is required before the second test at Lord's to fix it."