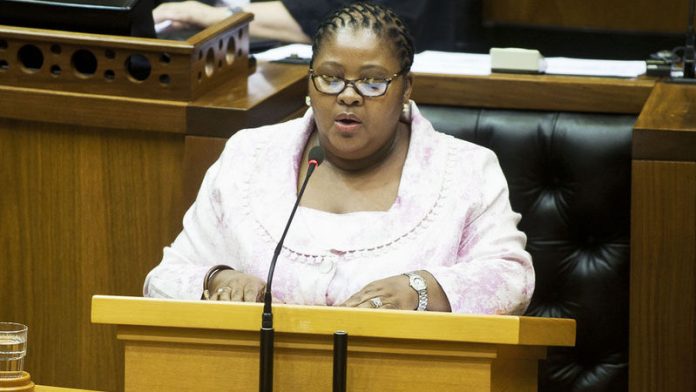 Mapisa-Nqakula's use of a South African Air Force helicopter to go to Tlokwe, North West, to receive a memorandum is an abuse of state resources, the Democratic Alliance said on Tuesday.

"On Friday, the South African National Civic Organisation and the ANC demanded that a memorandum calling for action against the former mayor of Tlokwe, Maphetle Maphetle, be received by President Jacob Zuma," DA MP David Maynier said in a statement.

"Instead, the minister of defence was sent and she arrived in Tlokwe in a South African Air Force helicopter."

He said the trip related to the ANC and not to the government.

"This trip was specifically to deal with ANC infighting and had nothing to do with the department of defence," said Maynier.

"The minister's use of a military helicopter for a party political engagement is an abuse of state resources. It also contradicts the ministerial handbook."

'It was not about the ANC'
"The president may ask at any time for a member of Cabinet to attend to a matter that does not immediately pertain to their area of responsibility – so long as it pertains to governance issues," he said.

"The minister did not go as an ANC member. She was asked by the president. It was not about the ANC, it was about the ability of government to function there."

Mbananga said the minister used the helicopter to get to Tlokwe as soon as possible because the situation was volatile.

"It may have had parties involved, but the situation threatened to impact the functioning of government there. The minister received the memorandum, and she calmed down what was a potentially explosive situation."

Maynier said the DA would submit parliamentary questions on whether the flight was approved by the secretary of defence, what the total cost of the trip was, and whether the South African Air Force had been used for other "party political engagements".

"The minister must not treat the South African Air Force as the ANC's own airborne taxi service," he said.

Motion of no confidence
The ANC said last Thursday that Maphetle remained the mayor of Tlokwe even though he was unseated in a "illegal" council meeting.

The ANC made an application to the high court in Pretoria to declare the meeting illegal. However, no court date had yet been set.

On July 2, DA councillor Annette Combrink was voted in as the new mayor, for the second time since November, unseating Maphetle. In November, ANC factions in the municipality passed a motion of no confidence in Maphetle. He was replaced by Combrink – the first DA mayor in the province. However, Maphetle was returned as mayor in February.

While the DA was in charge, it asked for a forensic investigation into irregularities at the municipality. The probe found the council had irregularly bought Maphetle a R736 000 customised Mercedes-Benz. Maphetle was also found to have allegedly abused the municipality's disaster management fund and poverty relief fund.

In May, the DA laid criminal charges against Maphetle. In June, public protector Thuli Madonsela said she would investigate the claims of corruption. – Sapa

The mayor, her relatives and their friends keep landing lucrative tenders and using state resources. Yet Lindiwe Makhalema has failed to declare the list of her relationships with people and companies benefiting from the municipality
Read more
Politics