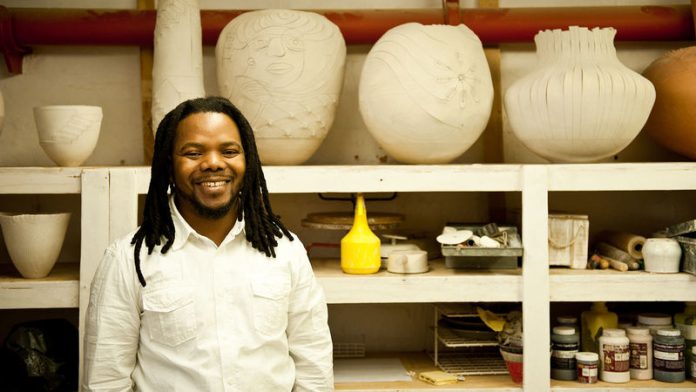 “To be true to Adelaide Tambo, depicting not the political activist but the abundant person, the warm mother, the elegant woman who loved art, music, fun and life.”

This is what Cape Town ceramicist Andile Dyalvane is determined to achieve with the pot he has been commissioned to create by Tselane Tambo in honour of her mother, Adelaide Tambo.

Andile’s unique design in his clay creations is strongly influenced by the traditional Xhosa practice of ukuqatshulwa, or body scarification, in which clay “flesh” is gently sliced open to resemble the tribal skin markings used as body adornment, and to seek spiritual protection for the family.

“The design on the pot will depict my interpretation of prominent memories that Tselane describes of her mother and of the happy times they shared as a family when the kids were growing up.

“Adelaide Tambo loved stylish hats and good jazz. “The family had an old jalopy they would drive around in. I’ve woven these elements into the design, reflecting her energy and warmth, and showing that there was far more to Adelaide Tambo than her political strength,” says Andile.

He says that for him, the honour of having been asked to design something celebrating this great woman — who he is too young to have met, but who he has always known about — is enormous.

“I’m from the generation that is reaping the fruits that Adelaide Tambo and others worked so hard to achieve.

“It’s very humbling and a great privilege to be chosen to create a pot in her honour and I am putting my heart into the piece.”

Andile’s style with his ceramics is inspired by African artefacts that serve practical use.

For centuries, pots of all sizes have been used to mix, brew, store, carry and cook food and liquids, and they play a prominent role in tribal culture.

Although he is skilled in a wide variety of art mediums, clay has always been the form that Andile best connects with — he believes it’s in his blood.

As a boy growing up in the rural Eastern Cape, Andile and his friends would spend hours fashioning animal figures out of river clay when they were meant to be herding the village’s livestock.

Cape Town’s oldest roadhouse is hoping to make a comeback during the coronavirus lockdown. Nostalgia is the biggest seller
Read more
Education

The teenagers, who clearly understood that race is fluid – some even changed their identity – felt shunned. If race is socially constructed, they should not be ignored.
Read more
National

This week, the Black People’s National Crisis Committee (BPNCC) said it would intensify protest if activists are not listened to.
Read more
National