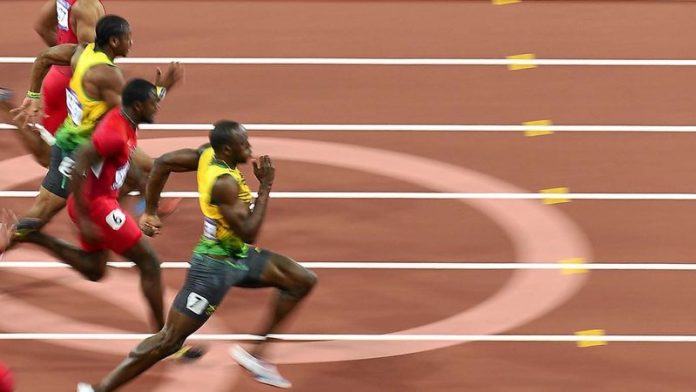 In less than a fortnight, Usain Bolt will line up in London's Olympic Stadium to contest a 100m sprint that was supposed to remind the public of the magic of last year's golden Games.

Instead, it is likely that many in the capacity crowd who snapped up tickets for the Anniversary Games in record time will not be going misty-eyed, but again wondering whether they can trust what they see.

The news that Bolt's American rival Tyson Gay, the fastest man over 100m in the world this year, and Bolt's compatriot Asafa Powell have both tested positive for banned substances has rocked a sport that has laboured to shake off the stain of doping ever since Ben Johnson shocked the world at the 1988 Olympics in Seoul.

Although widespread in-competition testing means athletes rarely test positive during a major championship, anti-doping organisations are waging an international war against   cheats and the sophisticated networks that support them.

Powell, the former 100m world record-holder, and four other Jamaican sprinters including 4x100m relay Olympic silver medallist Sherone Simpson, all tested positive for the banned amphetamine oxilofrine at their national championships last month. The string of positive tests increases fears that the public will start to view doping in athletics as endemic, in the same way as professional cycling in the Lance Armstrong era came to be tainted for the public and for sponsors.

United Kingdom Sports Minister Hugh Robertson said that, if that happened, it would "kill" the sport of athletics. "I don't think we're at that point yet. It's very disappointing. But if there's any sort of silver lining, it is that they were caught."

In a warning that now looks prophetic, the World Anti-Doping Agency's (Wada's) director general, David Howman, told the Guardian earlier this year that athletics could be the next sport to be revealed as being riddled with cheats.

Blood samples
According to Wada's figures, the number of adverse or atypical findings across sport is just less than 2%. But, according to a study of blood samples collected after the World Athletics Championships in 2011 in South Korea, estimates of the prevalence of blood doping averaged 14%.

"That means that it's more than what people think, that's all you can say. I would put athletics in that bunch. That's an area where we've got to be very attentive," Howman said.

Powell said he had not knowingly cheated or taken any banned substance. Simpson said she "would not intentionally take an illegal substance of any form".

Gay, who is the second-fastest man over 100m and had been in startling form this season, had previously taken part in a United States anti-doping campaign.

"I don't have a sabotage story. I don't have lies. I basically put my trust in someone and I was let down," said Gay.

Adidas on Monday suspended its contract with Gay, who has only periodically showed the form that made him a world champion in 2007 amid persistent injury concerns.

"We are shocked by these recent allegations, and even if we presume his innocence until proven otherwise, our contract with Tyson is currently suspended," a spokesperson for Adidas said.

The managers of Bolt and world 100m champion Yohan Blake, who train in a rival camp to Powell, said their athletes were not involved.

Banned diuretic
Blake, the 2011 world champion, was banned for three months in 2009 for a drug that did not feature on the Wada banned list at the time but was similar in structure to ones that did. He did not compete at the national championships because of injury, while Bolt won the 100m.

Jamaica, which currently dominates world sprinting, was hit by another doping scandal last month when two-time Olympic 200m gold medallist Veronica Campbell-Brown was suspended by her national federation after a positive test for a banned diuretic.

The 100m has been particularly afflicted by doping scandals, with eight of the fastest 14 men having served, or about to serve, drug suspensions.

Gay's admission came a week after it emerged that up to 30 Turkish athletes faced doping bans after the International Association of Athletics Federations (IAAF) confirmed the country had been targeted over concerns about abnormal biological passport values.

Russia, which hosts this summer's world championships and the Sochi 2014 Winter Olympics, has also been in the spotlight. Forty-four Russian athletes are currently serving doping bans.

Meanwhile, a "flying squad" of testers was sent to the Rift Valley in Kenya amid claims that doping was rife among some of the distance runners who train there – claims that have been refuted by the country's athletics federation.

Biological passport
As in cycling and other sports, IAAF officials introduced biological passport track changes in athletes' blood profiles, which could be caused by doping, in a bid to demonstrate that they were serious about stamping it out.

Anti-doping organisations were quick to stress that due process must be followed and Gay is not technically guilty of an offence, potentially punishable by a ban of at least two years, until the B-sample has confirmed the initial findings.

Howman also said that clean athletes should be comforted by the fact that high-profile cheats were being caught. "Our job is to make sure the clean athlete is protected. We know that the science is not catching them all. So when it does work, we should be pleased," he said.

The six positive tests sent shock waves around a sport haunted by the memories of Johnson's cheating, the Balco scandal and a string of other cheats who have threatened the public appeal and commercial viability of the sport.

The IAAF, criticised over the years for not doing enough to address the issue but latterly on a drive to emphasise its commitment to stamping out doping, said it was positive that more cheats were being caught. – © Guardian News & Media 2013