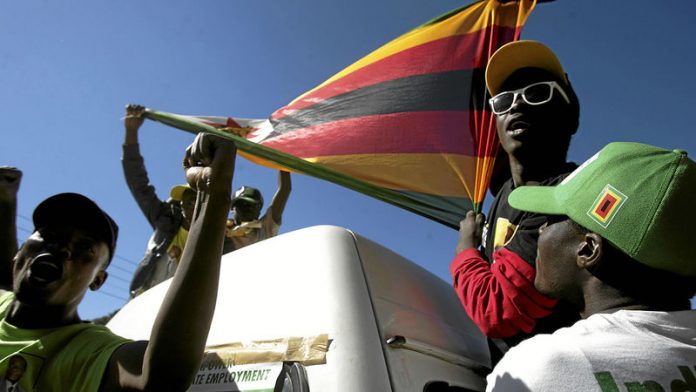 In 2008, only 18% of young voters aged between 18 and 30 voted in Zimbabwe’s elections. But with the youth vote expected to play a bigger role this time around, parties are rushing to get youngsters on their side.

In its manifesto, Zanu-PF calls itself “a natural home for the youth who are the frontline of the people’s revolution”. But it is hard selling 89-year-old Robert Mugabe to young voters who are angry at being jobless.

Still, the party is not giving up, attracted by the rich pickings available among the youth vote.

There are about 4.8-million potential voters in the 18 to 35 age group, making up 61% of eligible voters. Adults older than 35 represent only 24% of the total population, and 39% of potential voters.

As the July 31 election approaches, parties are battling to dip into this large voter pool.

With their candidate still unable to break out of his imperialist-bashing and struggle rhetoric, Mugabe’s party knows it has to look elsewhere to rustle up those precious votes.

Turning to social networks
The party is now looking to social media and its younger candidates to do the job.

This week, just before Mugabe arrived to address a rally in Chitungwiza, a young singer in tight yellow jeans and a green tank top sang from the trailer of a big, bright green campaign truck.

Nearby, two young ladies talked into a camera, one of them talking about how Zanu-PF supporters have “swag”.

It is a sign of how desperate Zanu-PF is to reach out to the urban youth, a constituency it has long ignored. Interest in politics has grown among youths, and turnout among them is expected to be high on July 31.

“The youths are definitely coming out this time; they are tired of political games and are after real solutions,” political analyst Charity Manyeruke says.

This week, voter education group Electoral Resource Centre (ERC) launched a “Get Out the Vote” campaign, targeted at getting young voters to the polls through music, social media and radio ads.

'X1G' campaign
An earlier campaign to get young people registered, dubbed “X1G”, had been a huge success, the groups’ director, Tawanda Chimhini, said.

“A key determinant in this election will be the youth. They [political parties] need to attract the youth vote,” Chimhini said.

The huge turnout in the March referendum, in which 3.3-million people voted, has widely been attributed to young first-time voters.

The ERC also said at the time that social media had contributed to increasing the interest of young people in the referendum. Usage of social media has boomed recently, and its impact on politics is beginning to show.

At the last election in 2008, Zimbabwe’s mobile penetration rate — the number of mobile phones as a percentage of the population — was only 13%. It has since risen to 97%.

In 2000, the year the Movement for Democratic Change (MDC) participated in its first election, only 0.4% of Zimbabweans were internet users.

Internet users on the rise
That number, according to official data, has since risen to close to 40%. Mobile web browser Opera in 2011 named Zimbabwe as its biggest growth market.

This has not escaped the notice of the country’s politicians, with all the major parties stepping up their activity on social media during the past few months in an effort to target young voters.

Zanu-PF, which for years has been suspicious of technology and has considered curbs on social media, has been forced online in the hunt for the youth vote.

But Zanu-PF knows that all this is not enough, and it is hoping that throwing money at young people will turn their eyes away from the obvious handicap of having an aged leadership.

Money already offered includes an $11-million fund set up by Old Mutual, a $12-million Tobacco Empowerment Fund to help young growers, and a $20-million Youth Wealth Creation Fund, which was put up by Stanbic Bank, the local unit of Standard Bank.

There’s even a promise to “use assets from indigenisation to empower the youth to create a national entertainment industry with international quality”.

The MDC has put jobs at the centre of its campaign, a message that easily resonates with its young, urban support base. Its economic plan, based mostly on foreign investment, would create a million jobs in five years.

Recently, a survey by the Mass Public Opinion Institute found that 64% of people were “looking forward to voting”, and 50% had registered to vote.

Mashonaland Central, a traditional Zanu-PF stronghold, had the highest number of registered youths at 70%, followed by Masvingo, which is largely pro-MDC, at 57%. Bulawayo, which has previously voted for the MDC, only had 19%.

Youth vote
Tawanda Moyo, a 22-year-old university engineering student, is excited about voting for the first time, and he says Morgan Tsvangirai should be the obvious choice for every young voter.

He feels Zanu-PF just does not get what the youth want: for a college student like him, he wants the assurance he will not be jobless after he graduates.

“The MDC offers new solutions to the problems we have faced over the last three decades. Zanu-PF, on the other hand, insists on its failed policies and the same individuals who have been in government for more than 20 years. These individuals are corrupt, venal and cruel,” he says.

The MDC “embraces the youth and understands their role”, he says. “There are many youthful candidates for Parliament in the MDC. I can relate to all these people and also, as former student leaders, they understand the concerns of my generation.”

The MDC is promising concrete benefits, he says, such as loans and grants for students, and the prospect of a job after graduation.

And the Zanu-PF government’s history of cracking down on student movements shows the party “does not accommodate the youth”, he says.

Confrontational relationship
“Since independence, its relationship with the country’s students has been acrimonious and confrontational. Students have been detained, beaten, harassed, persecuted, prosecuted and intimidated,” Moyo says.

Getting young people to participate has been a key part of all the parties’ campaigns, and voter education groups are also deliberately targeting the group.

According to Moyo, youths should take part because they are the ones who suffer most from misrule.

“Because we are unemployed, we are forced to illegally cross borders, dangerously too. We are used to perpetrate political violence, our sisters are forced to sell their bodies to make ends meet. We need to take control of our destiny as other young people are doing globally.”

Young people are a large part of the electorate, and “our vote therefore carries some weight … we should use this opportunity to vote for better lives”.

It is the youths who would inherit “a dysfunctional system, a collapsed economy, poor infrastructure and a divided society if we do not correct it now”, he believes.

Like most Zimbabwean youths, Tawanda (@tbmoyo on Twitter) is an active user of social media, where he has been engaging politicians on Twitter and taking part in discussions on elections. He is also a blogger “in my free time”, he says.