The flaw that broke the construction cartel’s back

It was not an attack of conscience or fear of consequences that brought the beginning of the end for the construction cartel. It was the failure by one of the participants to pay its dues to co-conspirators in the Coega harbour project, and alleged greed in the prices charged for building World Cup stadiums.

Long-standing and hugely profitable organised co-operation between major construction companies started to fall apart because of a breakdown of arrangements between participants when it came to paying "loser fees", confidential documents in possession of the Mail & Guardian reveal.

One incident in particular, in which a major player, Concor, withheld "loser fees" from competitors that had helped it to win a major contract, indicates the loss of trust that ultimately saw 15 companies called to account in a process that continued this week.

As a result of that incident, and others like it, a scam worth a conservatively estimated R4.7-billion in unfair profits to the companies involved was brought to an end over "loser fees" that typically did not exceed R30-million in value. Now the firms face billions in fines and civil settlements.

Competition authorities this week moved to finalise a settlement that will see the companies pay a combined R1.5-billion in administrative penalties. But that will not be the end of the road for the companies. Those affected will be seeking damages, proceedings at the Competition Tribunal indicated.

In addition to the financial impact, at the proceedings in Pretoria this week, the nongovernmental organisation Corruption Watch also called for criminal prosecutions to be launched against executives at the companies involved in the bid rigging.

Leniency
In the hearing before the Competition Tribunal that started on July 17, the Competition Commission – and various other parties – declared themselves satisfied with the fast-track settlement process involving the construction cartel, with R1.5-billion in administrative payments due from the companies that broke competition rules. Many organisations that were victims, however, indicated that they intend to sue for the amounts they were overcharged – for everything from the building of football stadiums to the construction of roads.

Most of the construction companies involved earned themselves leniency by disclosing details of  gentlemen's agreements between themselves on bid rigging, loser fees and cover pricing, substantially reducing the penalties they will pay.

However, documents submitted to the National Prosecuting Authority show that the ultimate breakdown of the cartel may have begun after construction giant Concor "reneged on the payout of substantial tender fees related to the Coega harbour project", apparently destroying trust within the cabal.

Concor, which was bought by Murray & Roberts soon after it reneged on the deal, was the major player in the R1.5-billion main Coega construction contract.

The affidavits put before prosecutors show that losing bidders, which intentionally priced themselves out of contracts but nonetheless competed to provide a semblance of reality to the tender process, were regularly paid the cost of submitting "fake" tenders.

"[In the case involving Concor] all money that was due through the process had to be written off by all the participating contractors," said one company official in an affidavit, apparently leaving companies out of pocket for research and work done on their submissions.

Normal practice was that the successful contractor would pay other participating contractors the agreed sum once the contract was awarded. In some cases the payment was not made in the form of cash but was set off against other fee deals. The practice continued until at least 2007.

Loser fees
On July 18, a participant in the cartel – G Liviero & Son – told the Competition Tribunal that it had listed payments to losing bidders as "plant hire" in company accounts. The practice of hiding these fees in that way was confirmed by other companies.

How much Concor was due to pay fake bidders is not clear. In some instances, statements by involved executives show, loser fees ranged between 1% and 3% of the contract size, which would make the Coega payment a substantial amount.

In another case, an executive details a "loser fee" of R300 000 each to two other bidders, with a range as high as R5-million paid to as many as six different intentional losers.

Nonetheless, the payments were dwarfed by the illicit profit the scheme generated for the companies, even though the exact quantum is likely to be subject of complex and protracted legal action.

"The courts use the 'but-for' test, which measures what the price would have been but for the collusion. But that never happened, so it is very difficult to count the cost."

Those are the arguments groups such as the South African Local Government Association and its constituent municipalities will have to put before a court if they pursue civil claims. Despite the difficulty, such claims seem inevitable; various role-players this week cited reasons both ideological and monetary for pursuing all avenues of restitution open to them – even if it means spending years and millions of rands.

For others, the road to damages may be shorter. Various experts say shareholders could, theoretically, claim the damages paid by the companies they part own from the directors who, through ignorance or active involvement, allowed the cartel to flourish. 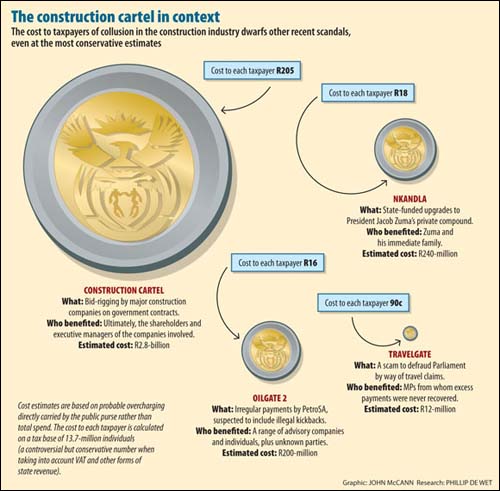 Substantial profits
Organisations not in need of a strict measure of damage use rules of thumb, such as the 10% excess American authorities ascribe to cartel behaviour. By that measure, taxpayers would have directly coughed up R2.8-billion in extra costs on these deals, and the cartel itself would have benefited to the tune of about R4.7-billion.

But the 10% figure is very conservative. In cartel cases around the world, the behaviour has been conclusively shown to have increased prices by as much as 30%, and the illegal mark-up rarely dropped below 15%.

"In this kind of collusion, where big projects were involved rather than consumer goods, the mark-up was likely higher [than 10%], also because the losers had to be compensated and that was built into the mark-up," says Corruption Watch's David Lewis, who is also a former competition regulator.

The profits were substantial enough to keep the illegal collaboration operating even as some companies became increasingly concerned about the practice being uncovered.

Even amid those fears, though, some construction companies held meetings in 2006 to discuss dividing work related to preparation for the 2010 World Cup, because of concerns that winning bidders might not have had the resources to complete the work allocated to them. Instead of leaving the matter to chance or the vagaries of tender adjudication, the companies discussed divvying up the available work among them.

At least two companies in settlement agreements with the Competition Commission have admitted to such meetings.

The companies also told the tribunal that in some cases they had not had the capacity to take on contracts, so an agreement was reached over who would take which project.

Though the breakdown in trust among participants may ultimately have led to the cartel unravelling, it was suspicions of overpricing on World Cup stadiums and surrounding infrastructure that launched the investigation into the cartel.

In 2011, the Competition Commission and the National Prosecuting Authority decided to investigate the construction sector after complaints were made about the cost of the stadiums, with suggestions of a huge discrepancy between prices and what was delivered.

The commission launched a fast track process, encouraging construction companies to come clean and make submissions to the commission in return for leniency in some cases and reduced fines. Fines eventually imposed on the companies ranged from between 1% and 7%, rather than the full 10% allowed.

Cartels rule – but nailing them is not easy

From a bread cartel in South Africa to a road cartel in Poland and public-sector bid rigging in the United Kingdom, the world is awash with cartels divvying up work and rigging prices in everything from chemicals to pencils.

"The returns on collusion are very, very great," says Corruption Watch's David Lewis. "It happens everywhere, all the time, because it is a rational form of profit maximisation, even if it is illegal."

It is nearly impossible to tell how big the problem is. Although cartels and price-fixing distort markets in what should be recognisable ways, detecting their activity remains a tricky problem – unless somebody breaks the silence.

"Though there have been various attempts over time, it is fair to say that economic analysis – whether it occurs in government, academia or private consulting – has largely been a nonplayer in the discovery of cartels," wrote Joseph E Harrington of Johns Hopkins University in the United States in a 2005 paper. "Economic analysis can be instrumental in making the prosecutorial case and is essential in assessing damages but it has not been a standard tool for detecting cartels."

Economists and analysts have made various stabs at the problem by using data to raise cartel red flags, as is done with great success by credit card companies and tax collection agencies looking for fraud. But the results have been mixed at best.

"You can look for certain patterns, say the rotation of bid winners or consistent wins by certain companies in certain geographic areas, but none of it is definitive," says James Hodge of Genesis Analytics. "You can try to detect the rules [by which cartels] operate, but people cheat."

Even seemingly obvious signs of collusion are not foolproof. Companies may come up with startlingly similar prices for projects when using the same suppliers of raw materials, for example.

Instead of market surveillance or the comparison of large amounts of data, cartels are most commonly uncovered by way of a snitch. A breakdown of trust – as appears to have happened in the construction cartel – can create unease within the group and make participants look for an exit strategy.

With leniency for full disclosure and a first-through-the-door immunity offer, that exit plan often consists of selling out former co-conspirators. – Phillip de Wet