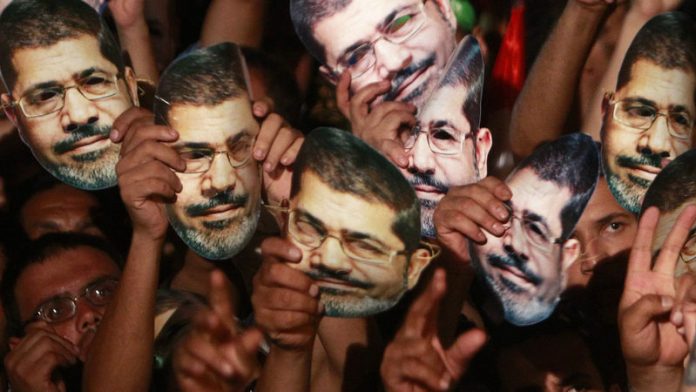 Islamists took to Egypt's streets on Friday, despite warnings by the military of a crackdown on violent protests.

The rallies come a day after Morsi's army-installed successor Adly Mansour vowed to fight for stability against opponents he accused of wanting to plunge the crisis-hit country "into the unknown".

A vast crowd gathered at Cairo's Rabaa al-Adawiya mosque, where Morsi's supporters have camped out since the military overthrew him on July 3.

About 10 000 protesters then set off in the direction of the Republican Guard headquarters, scene of deadly clashes last week, carrying pictures of the deposed president and chanting slogans.

But they were blocked by soldiers and armoured vehicles.

"Islamic, Islamic," they shouted, of their hopes for an Islamic state, as fighter jets flew overhead and military helicopters whirled in the sky.

"I believe Morsi will return as president, God willing. The people will win in the end," said a man who gave his name as Mohammed (45).

'Breaking the Coup'
Smaller rallies took off elsewhere in Cairo, second city Alexandria, and other towns across Egypt after Morsi's Muslim Brotherhood had called for a day of protests dubbed "Breaking the Coup".

Mansour, in a speech on Thursday night, pledged to rein in those who wanted to push Egypt "into the unknown".

"We will fight the battle for security to the end. We will preserve the revolution," he said, in comments echoed by the army.

Although mostly peaceful, the pro-Morsi protests have resulted in deadly clashes, with the unrest claiming more than 100 lives in all, according to an Agence France-Presse tally.

In the bloodiest single incident, at least 53 people died, mostly Morsi supporters, during clashes with soldiers outside the elite military barracks where they believed Morsi was being held.

The military on Thursday warned it would decisively confront any violence in the protests.

"The armed forces warn against any deviation from peaceful expressions of opinion, and the resort to violence," it said on Facebook.

"Whoever resorts to violence in Friday's protests will endanger his life, and will be treated with utmost decisiveness, within legal bounds."

Their demonstrations have been far smaller since the mass rallies clamouring for Morsi's resignation in the days leading to the coup.

In his speech, Mansour offered an olive branch to the Brotherhood, saying: "The framework of justice and reconciliation extends to all."

The movement has categorically refused to recognise Mansour's caretaker government, which was sworn in this week but with Islamist parties and movements totally absent.

Instead the Brotherhood is placing its hopes in sustained protests it believes may reverse the coup.

Thousands of Islamists have been camped out around Rabaa al-Adawiya, where they have vowed to remain until their goal is achieved, despite the growing anger of residents.

"We began our protest on June 28 and we will continue until Dr Morsi is reinstated," said one demonstrator on Friday.

Relaunch peace talks
Another major challenge facing Egypt's new government is the security situation in the restive Sinai peninsula, which has witnessed a surge in violence in the past two weeks.

The military began deploying reinforcements on Tuesday, with numerous members of the security forces killed and wounded in drive-by shootings and rocket attacks by suspected Islamist militants.

Three police officers died in separate attacks in north Sinai on Wednesday night and another was shot dead on Thursday, according to security sources, while the armed forces have killed 10 jihadists since launching their latest operation.

On the diplomatic front, Egypt Foreign Minister Nabil Fahmy spoke by phone with his US counterpart John Kerry about the latest efforts to relaunch peace talks between the Israelis and the Palestinians, and the domestic situation in Egypt.

Like most of the international community, the United States has refrained from saying Morsi was the victim of a coup, which would legally require Washington to freeze some $1.5-billion in US military and economic aid to Cairo.

Britain on Friday announced it was revoking export licences for equipment used by Egypt's military and police amid concerns it could be used against protesters. – AFP