Krejcir ‘lucky to be alive’ after hit attempt 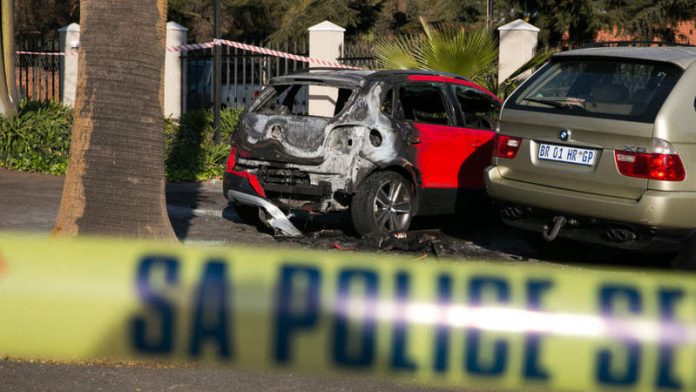 "My life is like James Bond right now," he told Eyewitness News on Wednesday. He said that after the earlier incident, he had no idea who would try to kill him and if he did, he would not tell anyone.

Police are investigating an incident of attempted murder on the Czech businessperson, after bullets were fired from a parked car shortly after he arrived at his office in Bedfordview, east of Johannesburg.

Krejcir arrived for work at his gold and diamond exchange business premises and parked his Mercedes-Benz in his usual spot. While talking on his cellphone, he heard what he called “firecrackers” and a loud explosion.

The dozen shots came from an empty red VW polo across the parking lot. An automated 12-gauge firing mechanism was found after the Polo detonated. Krejcir escaped unharmed.

According to the South African Police Service spokesperson Lungelo Dlamini: “At this stage we are not sure who or what detonated the device as well as who parked the vehicle on the premises. The Polo was stolen in April at Brixton,” he said.

"I saw him [Krejcir] drive in and shortly after there was this rattle and a deafening explosion. We all rushed out in shock. It is such a relief that he survived."

No arrests made
Forensics clad in blue protective gear swept the demarcated area for evidence. Wire strings were inserted through the 12 bullet holes in the right-hand side of Krejcir's car. However, nobody got close to the Polo and it remained untouched for most of the afternoon as the police feared it might explode.

“No one has been arrested yet and the motive for an attempted murder is being investigated," said Dlamini.

Dubbed "the man no law enforcement ­official appears able to catch", Krejcir is considered to be one of the biggest kingpins of the underworld in South Africa and abroad. Krejcir arrived in South Africa in 2007 on a passport bearing the name Egbert Jules Savy.

He was picked up on an Interpol red notice by South African authorities because he was wanted for tax fraud and other offences in his native Czech Republic. He has since been convicted in absentia on some of these charges.

Last year he appeared in court for various crimes around South Africa including armed robbery.

In 2011, the Mail & Guardian reported on the growing number of dead bodies whose trail always seemed to follow Krejcir. But, none of these deaths has been properly accounted for so far.

His associates, including bouncer boss Cyril Beeka and strip-club owner Lolly Jackson, have also turned up dead, while Jackson’s lawyer, Ian Jordaan, was also murdered after he rejected a claim made by Krejcir on Jackson’s estate.