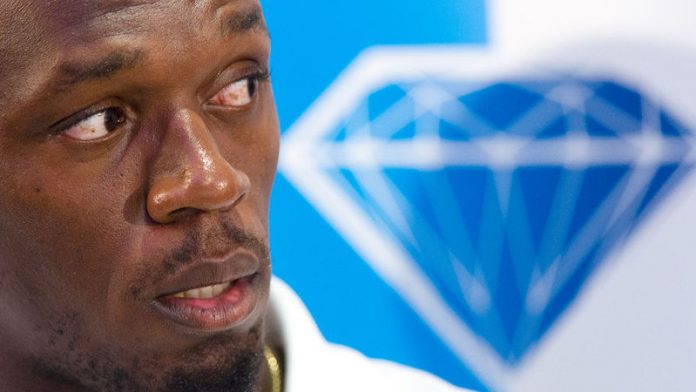 "I was made to inspire people," six-time Olympic champion Bolt told a London news conference on Thursday, ahead of his return to the Olympic track on Friday, where he will run in the 100 metres at the Diamond League Anniversary Games.

Bolt's compatriot Powell, the former 100m world record holder, tested positive for the banned stimulant oxilofrine at Jamaica's national trials last month and is still waiting to discover whether analysis of his B sample confirms the original finding.

Meanwhile, United States sprinter Gay also tested positive for the same stimulant in an out-of-competition test in May.

But Bolt, 27 next month, refused to condemn either of his rivals on Thursday.

"There's a lot of details to be discussed, I'm just waiting to see what's going on," Bolt said.

"I spoke to Asafa, it's tough, it's hard. I spoke to him and told him to stay strong," said Bolt, who in London last year repeated his Beijing feat of winning the 100m, 200m and 4x100m Olympic gold medals.

"In life you learn anything is possible. You have to be very careful as an athlete, there are a lot of things on the banned list."

'I'm living out my dream'
Bolt has never failed a drugs test and most observers of athletics agree, such is his stellar reputation, that it would be a potentially terminal disaster for the sport if he did test positive for a banned substance.

Asked how track and field fans could "trust" him, Bolt replied: "How long have you been following Usain Bolt?

"If you've been following me since 2002, you know I've been doing phenomenal things since I was 15: I've broken every record there is to break. Right now I'm living out my dream. I've shown throughout the years I've always been great."

Earlier on Thursday, the Jamaica Football Federation said an unnamed player has tested positve for a banned substance after a World Cup qualifying match against Honduras last month.

Asked if he "trusted" his fellow athletes, Bolt answered: "It doesn't matter, I get the job done. You just worry about yourself."

'I don't make the rules'
As for British athletics great Sebastian Coe's call to increase standard doping bans from two years to four years, which would see athletes who failed a drugs test miss the next Olympic Games, Bolt said: "I don't make the rules, I can't determine how hard things should be.

"That's why we have the IAAF [International Association of Athletics Federations] and Wada [the World Anti-Doping Agency].

"As an athlete, I just have to be very careful, I have a great team and they make sure I'm on [the] straight and narrow.

"For me I get tested all the while. I got tested the day before yesterday, it's just part of the routine. I'm clean.

"As an athlete you have to be careful with the food you ingest. I have a great team around me. They make sure everything goes smoothly but I am also careful myself." – AFP