Film Board could contest Of Good Report unbanning 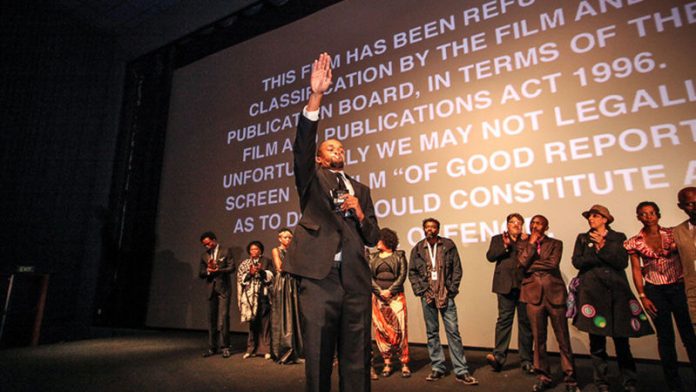 The film was unbanned in a hasty hearing on Saturday by the Film and Publications Board’s (FPB) appeal committee. This meant it could be screened yesterday, the last day of the Durban International Film Festival, originally intended to be the opening film on July 18.

Prince Ndamase, spokesperson for the FPB, said a new plan of action is dependant on the reasons that will be tabled by the Appeals Tribunal. “Ours is to find out if the decision was made in line with the Films Act and that classification guidelines were followed. At this stage it is hard to determine what we will do,” he said. He confirmed that the Board is still adamant that the content of the film is pornographic.

Greg Palmer, the attorney representing Spier Films, said the decision was welcome and they are also waiting on the reasons to ascertain whether the lifting of the ban will be permanent or not. “We are happy that the film got to be viewed and also won an award,” he said. He added that they are aware that the FPB might consider contesting the matter in the High court.

The Appeal committee of the FPB made a new classification for the film, making it a 16SNVL (Sex, Nudity, Violence and Language). On Saturday night after the ban was lifted the film won a special award for bravery. The film is an art-house film that shows a teacher who is a sexual predator who seduces his 16-year old pupil. The manner in which the film was banned was deemed unfair as the audience had been anticipating the screening on the first day. Instead of the film visuals a FPB message appeared on the screen: “This film has been refused classification by the FPB [Film and Publication Board] in terms of the FPB Act 1996. Unfortunately we may not screen the film Of Good Report as to do so would constitute a criminal offence.”

FPB later ordered that “all copies of the film must either be surrendered to the police or destroyed”, on the basis that it contains child pornography. The film’s producer Mike Auret said in an interview, “It is a disturbing film because it shines a light on sexual predators; it is not designed in any way to cause arousal, but rather the opposite. We are not denying that the film is about a teacher having sex with a pupil but it’s not designed as pornography, it cannot be used as pornography."

The film’s director Jahmil Qubeka was reported as saying, in the City Press, that he intends to sue the FPB for defamation after they smeared him and his crew as child pornographers. “I’ve got lawyers and time on my hands. I’m making a public call for their resignations,” he said.

Following the ban on July 18, Qubeka launched a twitter attack on Ndamase and the entire board calling for their resignations. Ndamase in turn called Qubeka an embarrassment to the art. “Similar to Bafana Bafana, you play in a tournament and yet you don’t know the rules.” To which Qubeka responded: “You have picked a fight with the wrong “clever black”. Qubeka said the film is not child pornography as defined by the Constitutional Court, which says it must be intended to stimulate sexual arousal in the target audience.

Hearing on Zuma’s plea for acquittal postponed to August 10

The World Bank is funding a plan to deal with air pollution in Ekurhuleni, Tshwane and Johannesburg

Scientists know that people who have had Covid still benefit from getting vaccinated with at least one shot of the vaccine. But can you get vaccinated while you have Covid?
Politics

‘This would be a very serious disincentive to investment,’ says Thabo Mbeki in a document arguing that the ANC should not proceed with the Constitutional amendment of section 25
Africa

Empowering her people through music and education, Maggie Mkandawire fights the Covid-19 pandemic in her own unique way
Advertising