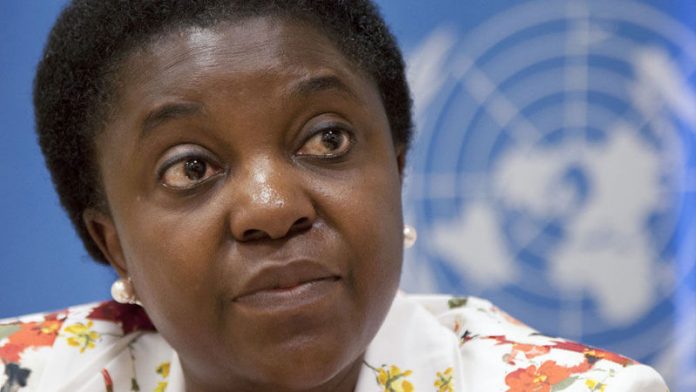 Italy's Integration Minister Cecile Kyenge has been a target of racist slurs since her appointment in April.

Kyenge, who is originally from Democratic Republic of Congo, appeared at a political rally in Cervia in central Italy on Friday when someone in the audience threw bananas towards the stage, narrowly missing it.

Kyenge has faced almost daily racial slurs and threats since joining the government. Earlier this month a senator from the anti-immigration Northern League party likened her to an orangutan and only apologised after a storm of criticism.

Last month, a local Northern League councillor said Kyenge should be raped so she understands how victims of crimes committed by immigrants feel. The councillor has received a suspended jail sentence and a temporary ban from public office.

Shortly before Friday's incident, members of the far-right Forza Nuova group left mannequins covered in fake blood near the site of the Democratic Party rally in protest against Kyenge's proposal to make anyone born on Italian soil a citizen.

"Immigration kills" was written on leaflets accompanying the dummies – a slogan Forza Nuova has previously used when referring to murders committed by immigrants in Italy.

However, on Saturday the group denied that one of its members had thrown the bananas. Italian police are trying to identify the culprit.

Support and condemnation
Kyenge responded to the gesture on Twitter, calling it "sad" and a waste of food.

"The courage and optimism to change things has to come above all from the bottom up to reach the institutions," she added.

Several politicians, including her peers in Prime Minister Enrico Letta's government, responded with messages of support and condemnation on Saturday.

Environment Minister Andrea Orlando said on Twitter he felt "utmost indignation for this lowly act", while Education Minister Maria Chiara Carrozza praised Kyenge for her courage and determination in such a hostile climate.

Veneto region governor Luca Zaia from the Northern League, who is due to participate in an immigration debate with Kyenge in August, also spoke out against the incident on Saturday.

"Throwing bananas, personal insults … acts like these play no part in the civilised and democratic discussion needed between the minister and those who don't share her opinion," the ANSA news agency quoted him as saying. – Reuters