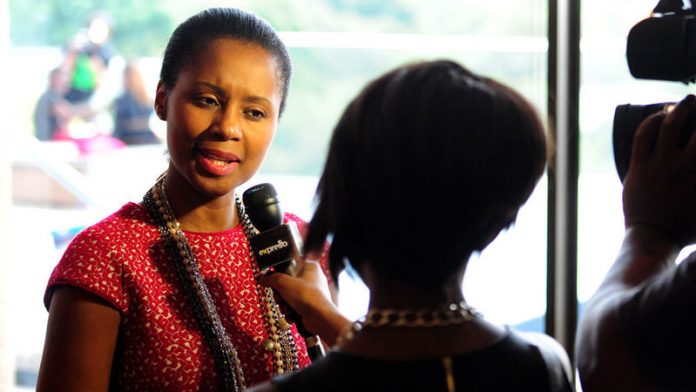 "It has come to the attention of Economic Freedom Fighters that the National Empowerment Fund has granted Khanyi Dhlomo R34-million to open an exclusive elite boutique of overpriced clothes in Hyde Park, Johannesburg. Like many South Africans, EFF holds Khanyi Dhlomo in high regard because until now, she had worked her way up and developed her career without questionable money from government," said an EFF statement on Monday.

"The manner in which the R34-million was approved by the wife of Police Minister Nathi Mthethwa, who is the current [chief executive] of the NEF, is questionable."

Luminance is owned by Ndalo Luxury Ventures, a fashion and lifestyle retail company founded by award-winning entrepreneur Dhlomo. Other co-owners of Luminance include Dhlomo's mother, Venetia, and businessperson Judy Dlamini, reported City Press at the weekend.

After the shop's opening in Hyde Park last week, reports revealed that the fund extended the loan to Dhlomo and her partners for the financing of the shop. The event, according to Politicsweb, was reportedly attended by a number of high level politicians including NEF chief executive Philisiwe Mthethwa her husband Gauteng Premier Nomvula Mokonyane, among others.

'Return the R34-million'
In its statement, the EFF advised Dhlomo to distance herself from possibly corrupt politicians and pursue her business interests without using public funds. "EFF request that Khanyi Dhlomo return the R34-million she was given by the NEF so that the NEF can allocate the money to useful projects, not a luxury Boutique for the elite.

"EFF will give Khanyi Dhlomo exactly 14 days to return the money to the NEF, and failure to do so will prompt us to report the granting of the loan to the public protector who should investigate whether there are no previous relations between her and the wife of Nathi Mthethwa, and further investigate whether there was necessity to grant such a loan for a shop that will contribute nothing to South Africa’s developmental programmes," said the political platform headed by former ANC Youth League leader Julius Malema.

"How on earth can a National Empowerment Fund in a country that has deep-rooted poverty, unemployment and inequalities prioritise luxury and conspicuous consumption driven [the] boutique at the expense of financing real developmental and entrepreneurship programmes," reads the statement.

According to the EFF, Dhlomo and her partners did not need R34-million to open the shop, "which sells dresses for R100 000 per item".

"They can use their access to many opportunities to utilise private finance, and leave public money to be given to empower poor people. The NEF is also grossly irresponsible and inconsiderate to grant so much money for the opening of a shop for the elite while many people do not have access to opportunities. It [the NEF] has now defined itself as a national enrichment, not empowerment fund."

"It said the loan was a 'prudent investment' and 'perfectly legitimate and praiseworthy'. Questions have been raised about the job-creation and entrepreneurial spin-offs of the investment relative to other possibilities, especially as the National Empowerment Fund has now run out of funds," said the publication.

'Black women entrepreneurs'
According to the report, Moemise Motsepe, fund spokesperson, said the retail sector was primarily white and foreign-owned even though most consumers were black.

Business Day quoted Motsepe as saying the investment was in line with the NEF’s "mandate and policies in that it supported a company owned and managed by black women in an untransformed sector".

"The money received from the fund was used by Ndalo to construct the store, buy stock and embark on the local manufacture of a clothing range under the Luminance brand," read the reported.