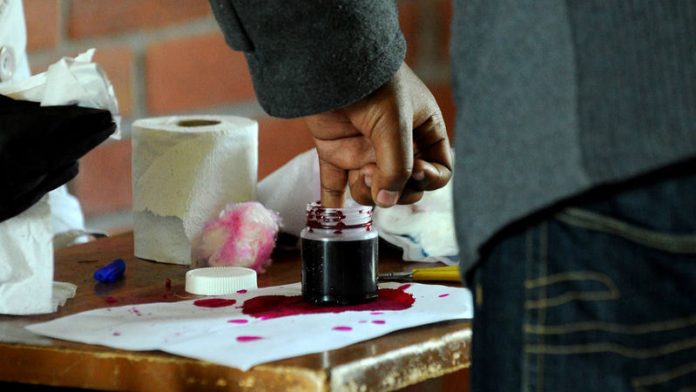 The chaos in the voting process has strengthened allegations that Zanu-PF, with the help of the Zimbabwe Electoral Commission (ZEC), wants to steal the polls by disenfranchising people in urban areas which are perceived to be MDC strongholds.

Several police officers who failed to cast their ballots during the special vote also failed to vote on Wednesday after finding their names crossed off the roll, an indication that they had voted.

ZEC chairperson Justice Rita Makarau told journalists the commission did not have an idea of how to deal with the police officers who were turned away other than investigating.

“We are investigating cases in which such officers didn’t vote because the register indicated they voted as their names were crossed out,” she said.

Only names of those who had successfully cast their ballots were supposed to be crossed off the voters' roll. Makarau confirmed some voters had been turned away despite producing registration slips as evidence.

She said the registration slips of those who failed to vote did not indicate the wards in which they were supposed to cast their ballots.

'Go back and vote'
"We advise all affected persons to go back and vote at any polling station in that constituency. Their details will be recorded in a separate record if they do not appear in the voters' roll,” she said.

Some people who voted in previous elections, including the 2008 harmonised elections, also found their names missing from the voters' roll.

There have been reports that Zanu-PF was working with a shadowy Israeli company Nikuv to manipulate the voters roll ahead of the polls, to disenfranchise people.

MDC-T organising secretary Nelson Chamisa told the Mail & Guardian that the election process was chaotic and manipulated, citing the high number of voters who were turned away.

"What is disturbing us is that several people were turned away because they were not appearing on the voters' roll. Those who were lucky to be on the voters’ roll were registered elsewhere, in places like Bikita and Uzumba when they are in Harare," he said.

"In Ruwa, there was a shortage of ballot papers for the presidential election and people had to wait for several hours. There was also intimidation of voters in Mashonaland Central, Mashonaland West and Mashonaland East.

"It has been difficult, but we have done our best, we leave the rest to God," he said.

'Shambles'
Biti told reporters his party had not been given the voters' roll despite the polls opening.

"Even now as we speak we do not have a copy of the voters' roll," he said. "We had an unhappy meeting with ZEC at 12pm and I have never seen such an arrogant bunch of people.”

Biti said there was a likelihood that some people could vote twice because the voters roll is in shambles. Makarau on Tuesday, however, said none of the political parties contesting in the election had been given access to the voters’ roll.

ZEC on Tuesday confirmed the voters roll was in shambles, but said it was too late to correct the anomalies.

"The voters' roll is now under ZEC and there is no way we can recall the vote registers from the 9 760 polling stations. The issue of dead voters appearing on the voters' roll or that of twins' double entries of the same name – let’s take them as lessons for the future,” said ZEC deputy chairperson Joyce Kazembe.

Meanwhile, a total of 111 Zimbabweans living and working in South Africa, who were coming home to vote, were arrested at the Beitbridge Border Post for border jumping.

Extension
Meanwhile, the Zimbabwe Electoral Commission extended voting to midnight after failing to clear all the people who wanted to vote by the 7pm deadline.

Makarau said although the voting process had gone well countrywide, there were still large queues at several centres by 6pm, prompting the commission to extend the voting period.

Makarau said there was an unusually high number of assisted voters in Mashonaland Central, but said there was nothing suspicious about the development.

MDC-T national organising secretary however said people were intimidated to such an extent that they asked Zanu-PF activists to assist them to vote.

“Even enlightened people like teachers were assisted to vote,” he alleged.

Makarau could not give the number of people turned away from polling stations. She said numbers would be made available on Thursday.

Despite the problems in the voting process, she said the polls were free and fair.

“I believe that the election is free and fair and I believe the reports that will come out will vindicate my assessment,” she said.

Arrests
Twenty people believed to be Zanu-PF supporters, have been arrested after being found with fake registration slips in Harare's Hatfield suburb. Kazembe confirmed receiving the report.

The arrested people attempted to use fake registration slips to vote.