Income groups: Things are tight around the middle 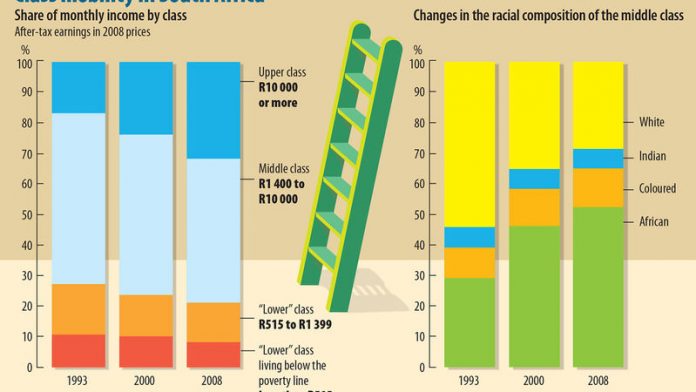 It is frequently reported in the media that the middle class is doing just fine, notably with reference to the growing size, income and expenditure of the black middle class.

This is taken as a clear sign of progress in South Africa after 1994. However, the middle class might not have done as well as many have assumed.

The middle class is usually understood to mean the group of individuals or households who have achieved a certain level of affluence in their lifestyle.

They spend a lot on good food, clothing, furniture, cars, education, housing, et cetera. Reports on the rise of the black middle class use such an interpretation of the middle class.

The racial composition of this relatively affluent middle class attracts attention as an indicator of economic transformation.

In addition, the affluent middle (black and white) is seen to be important for reasons such as providing a much-needed basis for education and skills, promoting entrepreneurship and investment, and driving growth with its spending power.

As explained below, in the actual middle of the distribution of income, life is everything but middle class.

This translates into an income of R5 600 to R40 000 a month for a representative household of four people.

Although these thresholds may appear modest for defining a relatively affluent middle class, according to the National Income Dynamics Study of 2008, less than 25% of South Africans lived in households with income above the lower threshold of R1 400 per person per month; and 2.8% of individuals were above the upper boundary of R10 000 (the upper class).

The percentage share of total income received by the middle class has been steadily falling over the first 15 years of democracy, as have the shares of income received by the two lower class groups. In contrast, the upper class (only 1.1% of the population in 1993) has seen a doubling of its share of total income, from roughly 17% in 1993 to 32% in 2008.

Income has become much more concentrated at the very top reflecting how South Africa’s income inequality has worsened post-1994, making it one of the highest in the world.

Since 1993, the middle class as a whole (21% of individuals in 30% of households) has gone backwards in income terms, even though the number of people involved has increased (roughly in line with population growth), the share of total income that they receive has been squeezed out by the income growth of the upper class. The two lower class groups (together comprising 76% of individuals and 66% of households) have suffered the same fate.

The racial composition of the middle class has switched from majority white to majority black indicating that real racial transformation has occurred.

This is hard evidence of a fast-growing black middle class, but importantly, it has occurred amid very modest growth of the middle class as a whole.

This has been accompanied by a dramatic growth in the concentration of income and the number of blacks in the upper class. The number of whites in the middle class has dropped — mostly owing to emigration but also because of movement into the upper class income category.

The actual middle
Apparently, 75% of individuals fall below the middle class in the income spectrum. How is that possible?

The actual middle lies between R350 to R1 040 per person per month (it is defined as an interval around the median household per capita income) and comprises roughly a third of all households.

That is very slow income growth. In monetary terms the group in the middle was, and still is, quite poor. In other words, those in the middle are not middle class at all.

Another perspective is to consider how the benefits of economic growth since 1993 were distributed across the income spectrum.

The average household in the actual middle of the distribution of income experienced the slowest income growth of all — less than 0.5% a year on average between 1993 and 2008 compared with approximately 1% or more for the other groups.

Households below the middle were supported by the expansion in social grant income whereas those at the top experienced market-based earnings growth.

The middle income group did benefit from increased grant income as well, but this was offset by a fall in their wage earnings, mostly because of rising unemployment.

The economic status of those in the actual middle of income distribution is important for the country. Their prosperity or poverty helps to assess our political and economic performance in post-1994 South Africa.

International evidence suggests that the growth of the relative share of total income of those in the actual middle leads to greater political stability, to a citizenry with higher levels of human development (including better education and health) and even to higher levels of economic growth.

Transformation
The middle class as a whole has not become much better off since 1993. Significant racial transformation has occurred in the middle (and upper) class, but this has come hand in hand with a marked concentration of income at the very top.

In the actual middle, millions of households experienced very slow income growth and a drop in labour-market earnings. This lack of absorption in economic activity and the absence of income growth for the middle households over such a long period is reason for much concern.

Rising political unrest and social instability may be a symptom of the slow earnings and income progress in the middle group. South Africa’s economic growth and development path need to become more inclusive to actually involve these households in economic activity and thus earnings.

Justin Visagie is director of economic research: department of economic development, environmental affairs and tourism, Eastern Cape. This is an abridged version of an article recently published on Econ3x3.org, a South African online policy forum