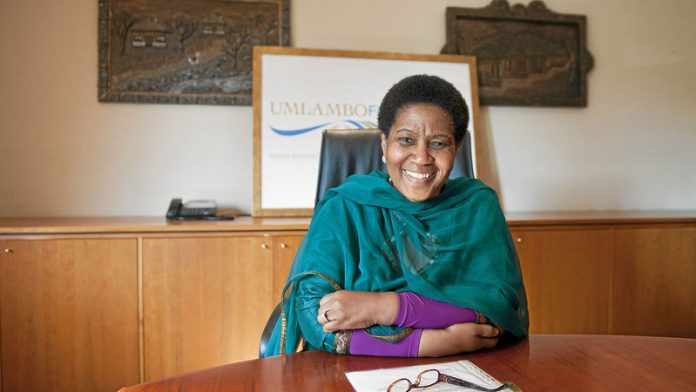 Far from challenging Mugabe's crude chauvinism, Zuma publicly distanced himself from Zulu, and gagged her.

"I thought it was really unfortunate," says Mlambo-Ngcuka, "because she's there as a professional. Her gender is neither here nor there."

"I think they should have nuanced it differently," she replies diplomatically.

Once South Africa's deputy president, Mlambo-Ngcuka this month takes the helm of UN Women, a three-year-old agency still striving for enough funds, recognition and a chance to make its mark. The 57-year-old replaces Michelle Bachelet, who resigned in March to run for another term as president of Chile, at a time when some perceive a global backlash against women's rights.

"I don't know if it's a clear backlash," Mlambo-Ngcuka says. "I think we're competing with many other issues. Maybe there's a little bit of fatigue. At the same time, women's issues have become more complex …

"There's a sense in which we have to become smarter about how we fight these women's issues and recruit new people. For instance, the law enforcers in many of our countries might not have moved as fast to identify these new crimes and deal with them as effectively as possible. So there's a lot to learn, also for us as the women's movements."

She also faces older barriers of tradition, religion and culture. Some are quick to denounce feminism as a Western ideology imposed from outside. She believes the days of such excuses from the powerful are numbered.

"I don't think there are many governments who have a leg to stand on as far as that is concerned, which doesn't mean it doesn't happen, but they don't have the courage to stand up and say that. The fact that, in many countries, sexism can be criminalised means that it is very difficult to be a leader and public representative and be blatantly sexist."

But in countries such as Afghan­istan, the Democratic Republic of Congo, India, Pakistan, Somalia and South Africa itself, there remains a chasm between legal theory and the daily reality of women's lives.

"Rape has become, for instance, one of the weapons in war situations that is used specifically against women, with impunity. That tells you there are deep-rooted traditional attitudes towards women.

"If we also look at the problem that is still with us, of child brides, which happens in full view of communities, you've got parents of one family actually giving up a child to another family to take as a wife way before that child is ready to be an adult.

"Those campaigns against child brides still remain a very important part of the struggle for women's rights. We do need to make the fight visible and we do need to look at how we support governments and NGOs [nongovernmental organisations], which are a crucial part of taking these battles forward …

Mlambo-Ngcuka arrives at the United Nations as the millennium development goals (MDGs) near their culmination and expiry in 2015 and debate begins on the post-2015 agenda.

UN Women says the goals have spurred significant progress but have yielded uneven results. For instance, about 800 women die every day of childbirth-and pregnancy-related complications.

"I don't think post-2015 we can have an emphasis on women that is less strong than what we had in the MDGs as we have them now," Mlambo-Ngcuka says. "We have not arrived at where we want to go.

"The MDGs continue to be concerned about poverty more than anything else. If you do not put women at the centre of this fight against poverty we just won't achieve what we want to achieve."

The former teacher, who led a gender-equality organisation during the apartheid era, also wants a strong emphasis on education. "Education for me is a cross-cutting priority. It is the equaliser, not only for girl children but for all the women who need second chances."

Some gender activists blame a lack of leadership for South Africa's attitudes to women, noting that Zuma is a polygamist with four wives, has stood trial for rape after having unprotected sex with an HIV-positive woman (he was acquitted) and once remarked that it is "not right" for women to be single.

Mlambo-Ngcuka goes into diplomatic mode again. "I leave the people to judge," she says, laughing. "Let me reflect on it. I'll get back to you on that one." – © Guardian News & Media 2013