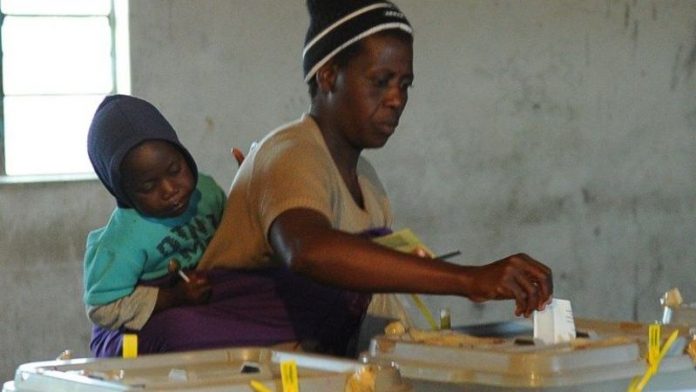 The party also dismissed the Southern African Development Community (SADC) and African Union (AU) missions’ assessment of the polls. The AU and SADC missions said the polls were credible although they cited a number of anomalies in the electoral process, among them the unavailability of the voters roll, high number of excess ballot papers and large numbers of assisted voters, among other things.

Addressing journalists in Harare on Thursday, shortly after the meeting, MDC-T spokesperson Douglas Mwonzora said SADC and AU should not arm twist his party to accept the results.

"The MDC totally rejects the election which was a monumental fraud by Zanu-PF and state agents together with traditional leaders," said Mwonzora.

"Nobody in their right mind can declare an election like that free and fair. In villages people were assisted to vote. We reject the SADC statement and reject their call to accept the results. Known MDC-T supporters are attacked and intimidated by Zanu-PF militia.

"We totally reject their statement that results should be accepted. Once the election is unfair, the results cannot be acceptable.

"We are aware that SADC and the AU might be sick and tired of the Zimbabwean issue but they have no right to tell us to accept this because they want to remove this problem child off the table."

'Null and void'
Mwonzora said the party’s highest decision making body outside congress, the national council, would meet in Harare on Saturday to deliberate further after which party leader Morgan Tsvangirai will make a statement.

Tsvangirai has already declared the election a sham and said results were "null and void".

Mwonzora said his party would give SADC, AU and the international community evidence that the poll was rigged. He said the party was preparing a dossier, which it will give to South African President Jacob Zuma.

Zuma is the SADC appointed facilitator in Zimbabwe and has challenged the party to produce evidence the poll was rigged.

Results released so far indicate President Robert Mugabe is heading for a crushing win, while his Zanu-PF party will claim a two-thirds majority in the House of Assembly.  Zanu-PF is poised to clinch eight of the country’s 10 provinces, a shocking development considering the party’s record in provinces like Manicaland, Matabeleland North and Matabeleland South, which are traditionally MDC strongholds.

MDC-T insists Zanu-PF rigged the election by manipulating the voter’s roll among other things. A high number of people could not vote after failing to find their names on the voters roll.

Clean win
The Zimbabwe Election Support Network claims about 750 000 urban voters were disenfranched after they names were not located on the voters roll. Some people found their names in wards they did not register.

Outgoing Justice Minister Patrick Chinamasa however told journalists his party had won clean. He said people voted for ZanuPF because they appreciated the party’s “people centred” policies such as the indigenising the economy.

He urged parties which are not happy with the outcome to seek the intervention of the courts.

Meanwhile, the Zanu-PF said it is willing to repair relations with Britain, provided the English country accepts that the people of Zimbabwe have got the right to choose their government and its programmes and lift sanctions on some of the country’s leaders.

Zanu-PF looks likely to win this year’s election by a wide margin, with party leaders predicting a two-thirds majority.

The results of National Assembly elections that have been trickling in show that the former liberation movement is way ahead of Morgan Tsvangirai’s Movement for Democratic Change (MDC-T) including in areas that are traditionally opposition strongholds such as Manicaland province.

"The indications from Wednesday are that we are going to have an unprecedented landslide victory in this election,” said Chinamasa, bragging that all Zanu-PF is waiting for is the "pleasure" of hearing the official announcement of the results.

No problem
At a press conference at the party’s headquarters in Harare, Chinamasa told journalists that Zanu-PF never had a problem with the British, but that the relationship was destroyed by Britain’s resistance to Zimbabweans claiming their own resources from foreigners.

“As far as Zanu-PF is concerned we’ve never refused to speak to them. It’s the British who refuse to speak to us,” he said.

Chinamasa, who visited the United Kingdom in March, said the British government indicated that it wanted to re-engage Zimbabwe.

"I told Simmonds [British parliamentary under secretary of state for foreign and commonwealth affairs Mark Simmonds] that when you’re ready to engage us you know where to find us. Our doors will always be open."

This March meeting was the first in over a decade that saw senior Zanu-PF leader having an official engagement with the government of Britain.

At the time Chinamasa said his party regarded the invitation from the UK government as "an indication that Britain realises that its foreign policy on Zimbabwe is collapsing and they want to embark on a new path".

Relations soured in 1997 when Zanu-PF accelerated a policy to give land back to black Zimbabweans.

By voting Zanu-PF back into power, the people of Zimbabwe demonstrated that they were happy with the direction that the country has taken, according to Chinamasa.

Zimbabweans chose “not to be swallowed by the beast of the western countries", he said.

'Good health'
Chinamasa praised Mugabe, who has ruled Zimbabwe for the past 33 years, as a strong leader who is “driving a new chapter of change in Africa".

"He's a very lucky person. God gave him very good health. For a person of 89, the energy he throws around, the memory, he can tell you almost to the day what happened in 1957."

While Zanu-PF has publicly expressed its unhappiness with western countries, particularly the US and the country’s former coloniser the UK, Zimbabwe has adopted the American dollar as one of its currencies.

Though Chinamasa maintains that his country has adopted multicurrency instead of just the US dollar, the American money is the most used in the southern African country. The South African rand is used mainly in the Beitbridge area, the Zambian kwacha in Victoria Falls area, while Botswana’s pula is popular in the Plumtree area.

It was a political strategy to adopt the US dollar, Chinamasa said.

"Because of sanctions, the next thing they [western countries] attacked was an assault on our currency and we became a laughing stock. We decided we must kill this animal called hyperinflation," said Chinamasa, who was acting finance minister when the Zimbabwean dollar was phased out in 2009.

"You must know when to retreat, but you must retreat strategically," he said.

"The adoption of the enemy’s currency was a strategic retreat and it has served us well."

When they take over government again, Zanu-PF will however work on sorting out currency problems because "our Reserve Bank doesn’t have a monetary policy to talk about".

'Club of white people'
Zanu-PF still demands that sanctions on the country be lifted. Chinamasa said these were not United Nations sanctions, but imposed by "a club of white people who were never satisfied that we are repossessing our land".

Earlier the SADC council of non-governmental organisations said the credibility and legitimacy of this election have been "highly compromised", adding that "the voter registration on its own compromised the expression of the will of voters".

Chinamasa accused western countries of sponsoring NGOs and some private radio stations to the tune of $2.6-billion to "effect regime change".

Chinamasa also used the press conference to take a swipe at Tsvangirai’s claim that the election was a farce.

"When 3.95-million people go to vote in cold weather, by what standard are you calling it a sham and a farce?"

Chinamasa said the election turnout, which he put at 3.95-million compared to 2.3-million in 2008 was "a record in the history of our country".

He said the MDC was free to approach the courts about its unhappiness with the election result, but questioned the hypocrisy of the MDC, which he said accepted results when it favoured their party, but complained when they lose.