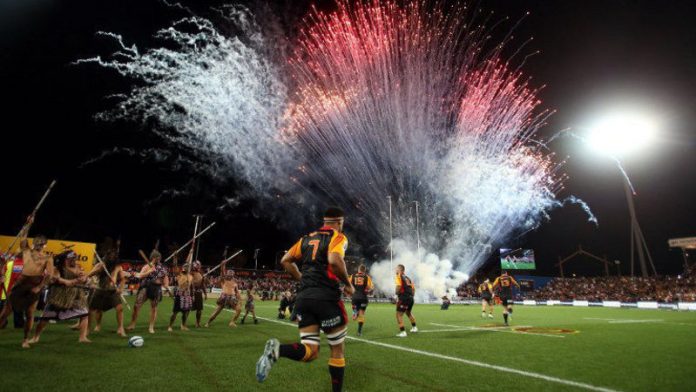 The Chiefs claimed their second Super crown in as many years with a 15-point closing burst after trailing 12-22 with 17 minutes to go.

Before a packed crowd of 25 000 at Waikato Stadium, the Chiefs outscored the Brumbies two tries to one.

"It was a messy first half. They were able to get in and slow a lot of our ball and steal ball and we got sucked into trying to push too many passes. So there was real character shown in that second half. We got great impact off the bench," he said.

Brumbies coach Jake White, who in the space of two seasons has transformed the team from a spent force into title contenders, was disappointed to see victory slip away in the dying stages. "Last week we were dead and buried in the 78th minute and we ended up winning [against the Bulls] and I had a little feeling it might happen again tonight," he said.

"Obviously you have to be a bit disappointed in that. I don't want to single out players in our squad but there were a lot of mistakes that were made when the pressure was on, and that happens in finals."

Through a quirk of the draw the Chiefs did not play the Brumbies in the regular season and were caught off guard early by the marauding Brumbies pack, led by captain and backrower Ben Mowen, which kept scrumhalf Tawera Kerr-Barlow under pressure.

As the Brumbies worked their way through the Jake White coaching handbook they kicked for position, put pressure on a scrambling Chiefs to draw penalties, and inside-centre Lealiifano had them 9-0 ahead inside the first quarter.

The Chiefs, favouring an expansive running game, managed to draw level through three quick penalties by Aaron Cruden before Lealiifano produced the first try of the match.

When the Brumbies flat-line defence forced the Chiefs to rush their clearance from a ruck, Lealiifano snapped up a looped pass to run 42 metres to score in the corner and he then converted his own try.

A further Lealiifano penalty extended their lead to 19-9 immediately after half-time, and a further exchange of three-pointers with Cruden had the visitors up 22-12 before the Chiefs found top gear.

As the Brumbies began to tire after travelling to South Africa and then New Zealand in the play-offs, Liam Messam scored the Chiefs' opening try by charging around the side of a five-metre scrum.

Then replacement fullback Robinson joined on the end of Asaeli Tikoirotuma for the second try, which Cruden converted and added a further penalty. In the space of seven minutes the Chiefs produced a winning 15-point burst to become only the fourth side to win back to back Super titles. – AFP