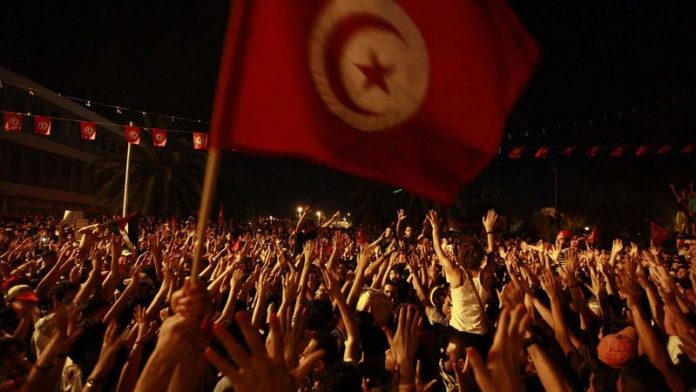 The murder of a leading left-wing opposition politician in Tunisia, the deaths of 11 soldiers in Islamist militant attacks and a series of bombs detonated around the capital, Tunis, all in a fortnight, have shocked and deeply saddened the people of this North African country. These attacks have also come at a time when Tunisia is facing its worst political crisis since the revolution in 2011.

Tunisia is where the Arab Spring began when Mohamed Bouazizi, a young fruit seller, set fire to himself, igniting the revolution that toppled the country's dictator, Zine el-Abidine Ben Ali. Its revolution was brief compared to its neighbours', making them an example of a democracy in the troubled region.

However, political unrest began two weeks ago when the leader of the progressive Popular Front, Mohamed Brahmi, was gunned down outside his home in front of his wife and disabled daughter. His murder came five months after the assassination of another opposition leader, Chokri Belaid, was also shot as he left his house. A government investigation revealed that Belaid was murdered by a group of Salafist militants and Brahmi was killed with the same type of gun.

His funeral two weekends ago in Tunis was attended by thousands of people who then protested in front of the seat of the National Constituent Assembly (NCA), the body responsible for writing the new constitution.

Their demonstration, against a government they feel is responsible for the assassination, led to clashes with police who fired tear gas into the crowd. Protests quickly spread around  the country. In Tunis pro- and anti-government protesters were separated by razor wire and police, returning each night in growing numbers accompanied by their children, families and friends.

Opponents of the government are unhappy with its progress. It was expected that the new constitution would be complete within a year, followed shortly after by elections. But, almost two years on, the constitution is not yet finished.

Amine Ghali, programme director of the Kawakibi Democracy Transition Centre, also said that "there has been a lack of delivery of democratic processes, including transitional justice, the independence of the judiciary, improvement of the economy, and the fight against corruption".

Many left-wing and secular groups  argue that these delays are the result of a weak state clinging to power.

"This government is finished! They are obsessed with power and don't want to listen," said Hamidi Redissi, a professor of political science at Al-Manar University, told the Mail & Guardian. "They missed the moment to found the new state institutions."

The government, made up of a troika of the Congress for the Repub­lic, Ettakatol and the dominant party, Ennahda, argue otherwise, saying it has taken time to get consensus on the drafting of the constitution.

"There is no logic. In a very critical moment, when we are about to finish the constitution, they want to dissolve the government and the NCA and go back to the streets," said NCA member Jawhara Ettiss.

In a televised broadcast last week, Tunisian Prime Minister Ali Laarayedh resolutely refused to dissolve the NCA, although the government later conceded to widening the coalition to create a government of national unity.

The evening of Saturday August 3 witnessed the biggest protests so far, with a mood that was highly charged but entirely peaceful. Thousands of anti-government protesters gathered in front of the NCA with cries of "Dégage! [Get out!]", while tens of thousands of government supporters poured into another area of the city, chanting, "No to coups, yes to elections!" and "Legitimacy!" amid a sea of red Tunisian flags.

"I came from Sousse [150km away] for this moment," said Balsem Brahem, a young woman wearing an Ennahda scarf around her head. "I came here to defend legitimacy, freedom and democracy."

It is difficult to avoid parallels between the political crises in Tunisia and Egypt where anti-government forces removed a democratically elected Islamic party. But it would be wrong to assume that Tunisia is heading down the same path.

"I don't think it will turn to violence here; wiser and cooler heads will prevail," said Radwan Masmoudi, a political analyst and president of the Centre for the Study of Islam and Democracy, a nonprofit organisation based in Washington and Tunis. "There are extremists on both sides who are trying to derail the democratic process but the majority of people, say 80%, believe in the democratic process.

"If democracy doesn't succeed in Tunisia, it will not succeed anywhere else in the Arab world."

Security is another growing concern. Many from the political left believe that the dominant Islamic ruling party has allowed or even encouraged militant Islamists and cite this for the increased attacks and weakened national security. The killing of the soldiers, some with their bodies brutally mutilated, during an ongoing Tunisian military campaign near the Algerian border has only added fuel to the political fire.

As families sit down each night to break their Ramadan fast together, their usually festive meal is accompanied with long television broadcasts of distraught mothers crying and wailing over their sons' coffins.

A number of bombs have exploded in and around Tunis, although the only casualties have been the bombers themselves – one who accidentally blew himself up and injured his pregnant wife and another who blew off his own hand. Islamic militants have been blamed.

A suspected "terrorist" was killed during a police raid this week, which led to the arrest of four others. The police claim to have foiled a plot to carry out another political assassination.

Tunisia's protests may be peaceful but the growing instability is already having a detrimental effect on the economy with tourists and investors turning away from the country.

Marrak Elyes, who works for an international company which he did not wish to name, said: "We are losing a lot of projects to Morocco, Bulgaria and Poland. We were negotiating on a project with Germany that would have brought 100 jobs for Tunisians. But, when Mohamed Brahmi was killed, we lost it."