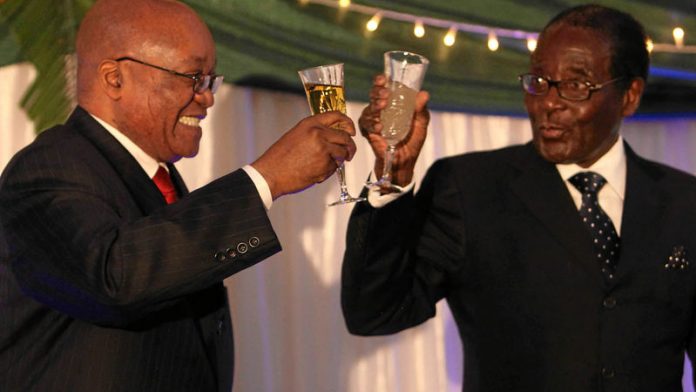 In the midst of the shock and uncertainty about the ­Zimbabwe election result, there is some news that might not occupy the headlines: namely that the win has placed the ANC and President Jacob Zuma in a corner, given the hard line Zuma and ANC secretary general Gwede ­Mantashe have taken recently on Zanu-PF.

It is only Julius Malema's Economic Freedom Fighters who are truly celebrating President Robert Mugabe's victory.

As the long winter of discontent started by Zanu-PF's win begins anew, Mantashe might have to think long and hard about how his statements – that Zanu-PF has destroyed the Zimbabwean economy and is destabilising the ANC by sponsoring Malema – will help foster good relations between the two countries and their respective liberation movements.

For at least another five years, Mantashe and the ANC government will have to reckon with Mugabe. Frankly, this is not of concern to many South Africans, who have to deal with the real issue of how the prolonged misrule of Mugabe and Zanu-PF will contribute to more Zimbabweans crossing the Limpopo to compete for resources with South Africans – and this in a context of an expected ­economic meltdown in our northern neighbour.

By prematurely congratulating Zanu-PF on its victory, Zuma created the impression that he was sympathetic to Mugabe or that he endorsed his flawed re-election. Nothing could be further from the truth. The fact is that Zuma, like Morgan Tsvangirai, the leader of the Movement for Democratic Change (MDC), was out­manoeuvred by the wily old Mugabe and his henchmen in strategic positions.

In South Africa, Zuma is the master of intelligence, using it primarily for self-preservation, to beat the law, as well as to expose enemies and stay ahead of his opponents.

But over the past month, Zuma's intelligence mastery availed little as Mugabe played his cards in a way that eventually resulted in his being "forced by the court" to hold the elections on July 31, despite the wishes of the Southern African Development Community (SADC) and the Zimbabwean opposition that it be delayed.

Zuma had also painted himself into a corner. Unless he and SADC mediators could actually show cause why the elections were not free and fair, they were compelled to accept, prima facie, what their own observers and the Zimbabwean Electoral Commission presented.

By that I don't mean that Zuma is therefore sympathetic to the MDC. If he is, it is by accident, because they share a common enemy. His antipathy towards Mugabe and Zanu-PF is a much stronger emotion than his embracing of an alternative. Reflections in later years will show that the MDC failed to take advantage of Zuma's much tougher stance on Zanu-PF as SADC mediator, and that they will rue this wasted opportunity for a long time.

The ANC has been on a roller­ coaster of emotions over the past few years in its approach to Zanu-PF. During the Mbeki era, it was treated with much more respect – to the extent that Tsvangirai complained of bias. Although Zuma has not been relatively outspoken, it is clear that he does not hold Zanu-PF in high esteem, believing it to be a party with a history of violence.

In the ANC, Zuma has been joined in his aversion to Zanu-PF by like-minded individuals such as secretary general Gwede Mantashe, who, as part of a Cosatu delegation, was kicked out of Zimbabwe in 2005. This means the two most powerful leaders in the ANC share a hostility towards the ruling party next door.

Their tough stance towards Zanu-PF was well articulated by one of Zuma's chosen Zimbabwe election facilitators, Lindiwe Zulu, over the past few months. But unfortunately, Zulu was sacrificed on the altar of expediency as a sweetener for Mugabe when the presidency ­distanced itself from her public ­pronouncements on Zimbabwe.

But, now that Mugabe has stolen an unlikely victory, the ANC and South Africa's government will have to continue to deal with him and his issues. As it is, Zuma would much rather spend his last term in office improving his poor ratings at home and creating a legacy than being saddled with an endless dispute in Zimbabwe.

South Africa has, once more, to bear the consequences of Mugabe playing Russian roulette with the Zimbabwean economy. It is estimated that, already, there are three million to five million Zimbabweans living in South Africa. A colleague who has just returned from covering the elections said Zimbabweans told her to convey a message to Zuma: "Tell him we are coming to your country."

Yet, having shed all pretence of being neutral, Zuma will have a hard time convincing such Zimbabweans that he means well and can impartially help to broker a solution. He is in a no-win situation: it's imperative that he deal with Zimbabwe, but it's a job fraught with poor ­prospects of success because of Mugabe's ­petulance and obstinacy.