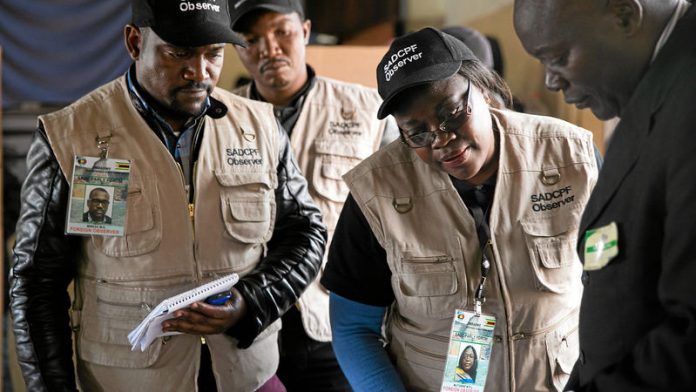 Next week's Southern African Development Community (SADC) summit in Lilongwe, Malawi, will be dominated by Zimbabwe's elections. Indications are that the regional bloc will endorse President Robert Mugabe and Zanu-PF's victory.

While this may be a sign of SADC governments rallying behind a fellow African country striving to free itself of former colonisers' influence, South African government sources told the Mail & Guardian this week that the majority of the regional bloc's member states, including South Africa, no longer had the appetite to stay entangled in Zimbabwe's long-standing political crisis.

Mugabe claimed a landslide victory, securing a seventh five-year term as Zimbabwe's president in a poll his opponent Morgan Tsvangirai of the MDC-T called "a sham" and "null and void".

In public, African observer missions gave the election a thumbs-up, but behind closed doors some members of the same observer teams ­conceded that enough had gone wrong to warrant tough questions.

Even the head of the SADC election observer mission, Bernard Membe of Tanzania, trod carefully, sticking to a "free and peaceful" election when releasing a preliminary report.

"We did not say it was fair. The question of fairness is broad and you cannot answer it in one day," Membe told journalists in Harare.

"Within 30 days of our main report the question of fairness may come, but we didn't want to jump to conclusions at this point in time."

Observers from SADC, the African Union (AU) and the Common Market for Eastern and Southern Africa (Comesa) missions have generally praised Zimbabwe for a peaceful election and urged all parties to accept the results. However, all teams stopped short of describing the poll as fair.

Botswana broke ranks with fellow SADC countries and called on the bloc to investigate the election. The country's 80-member observer team, led by former vice-president Mompati Merafhe, is compiling a report that Botswana will submit to SADC and the AU.

"It is the position of the government of Botswana that it is in the common interest of SADC member states, including in this instance Zimbabwe, to observe the SADC community's shared election guidelines to ensure transparency and credibility of the entire electoral process," read the Botswana government statement issued on August5.

Ian Khama's government is, however, likely to be dismissed in the same way the MDC parties in Zimbabwe have been rejected – as lackeys of Western countries. Botswana's tiny team will need to push hard to produce a convincing election report that will enjoy at least some support in SADC.

Tsvangirai said he would also submit a report documenting "all irregularities and all the illegalities" to the bloc.

The Democratic Alliance's parliamentary leader, Lindiwe Mazibuko, said should the audit confirm irregularities, elections should be held again once all problems with the voters' roll had been rectified and all conditions of the global political agreement had been met.

"The growing consensus that the elections were neither fair nor credible should have sent a message to President Jacob Zuma that his position should not be determined by regional politics," Mazibuko said.

Botswana's information minister, Jeff Ramsay, said his country's observers agreed that the election was free of violence and intimidation, and that voting had been peaceful, but raised concerns about "transparency, credibility and fairness".

"There is no doubt that what has been revealed cannot be considered as an acceptable standard for free and fair elections in SADC," he said.

"SADC should never create the undesirable precedent of permitting exceptions to its own rules."

The challenge for Botswana will be increased by the fact that two SADC strongmen, including Zuma, who has been serving as the bloc's mediator, and Tanzania's Jakaya Kikwete – who chairs the SADC organ for politics, defence and security – have accepted the election results and congratulated Mugabe and Zanu-PF.

Harare-based political analyst Ibbo Mandaza said it was clear "Zuma sought, in vain obviously, to wash his hands of the Zimbabwe crisis" but that "others like Botswana have no such illusions".