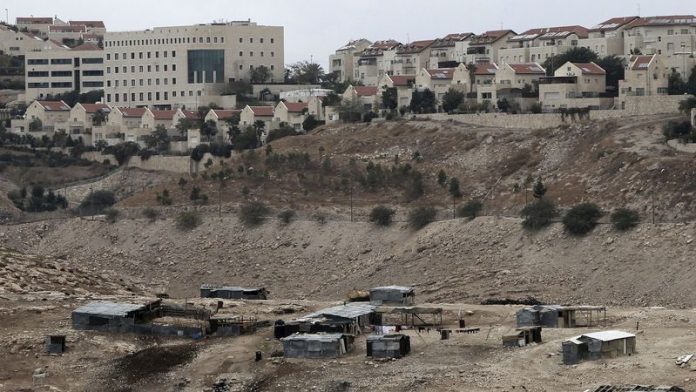 "Tenders will be published" later in the day for 793 units in annexed east Jerusalem and 394 elsewhere in the West Bank, the ministry said in a statement, three days before the next round of talks. Housing Minister Uri Ariel from the far-right Jewish Home party, dismissed international criticism of settlement building on occupied Palestinian land as illegal and an obstacle to peace.

"No country in the world accepts diktats from other countries on where it is allowed to build or not," he said in the statement. "We shall continue to market apartments and build throughout the country." The statement confirmed that plots were to be offered in Har Homa and Gilo, both on east Jerusalem's southern outskirts and in Pisgat Zeev, on the city's northern edge.

Tenders would also be invited for homes in Ariel, in the northern West Bank, in Maaleh Adumim, east of Jerusalem, and in Efrata and Beitar Ilit, around Bethlehem it stated. The US state department said last week that Israeli and Palestinian negotiators would resume talks in Jerusalem on Wednesday to end their long-standing conflict. They resumed direct negotiations in Washington last month ending a three-year hiatus after painstaking US mediation.

The last talks in 2010 broke down on the issue of settlement building. Palestinian negotiator Mohammed Shtayeh said the latest move was proof of Israel's intentions. "It is clear that the Israeli government is only interested in illegal settlement building, throwing away American and international efforts to resume negotiations," he said in a statement.

Lior Amihai, of settlement watchdog Peace Now, said that if negotiations collapsed to a background of Israeli settlement activity, the Jewish state could find itself in a worse situation than it was before talks. "We need to push and encourage the negotiations," he said. "It's a pity that the government chooses to place more obstacles in the way."

Israeli's chief negotiator in the talks, Justice Minister Tzipi Livni, was to meet with defence minister Moshe Yaalon and science and technology minister Yaakov Peri, a former head of the Shin Bet security agency, later on Sunday to approve a first batch of 26 prisoners to be freed ahead of Wednesday's talks.

A total of 104 long-term Palestinian and Israeli Arab prisoners, in jail since before the 1993 Oslo peace accords, are to be freed in four stages, depending on progress in the talks.

Palestinian patience 'limited'
Palestinian chief negotiator Saeb Erekat said on Sunday Israel's plans for new homes in Jewish settlements on occupied land were aimed to scupper peace talks that resume on Wednesday. Speaking to Reuters at his office in the desert city of Jericho, near the border with Jordan, Erekat expressed optimism that renewed talks with Israel would continue, but warned that Palestinian patience with the settlements was limited.

"Those who do these things are determined to undermine the peace negotiations, are determined to force people like us to leave the negotiating table," he said in an interview conducted before the latest Israeli announcement on settlement plans. "If the Israeli government believes that every week they're going to cross a red line by settlement activity, if they go with this behaviour, what they're advertising is the unsustainability of the negotiations," he added.

Erekat said that despite the new settlement plans, the Palestinian side was willing to negotiate with their Israeli counterparts for the full period agreed upon with Washington. "We are determined to give this effort of six to nine months every chance it deserves … it's time for the Israeli government to choose negotiations and show good faith," he said.  – AFP, Reuters