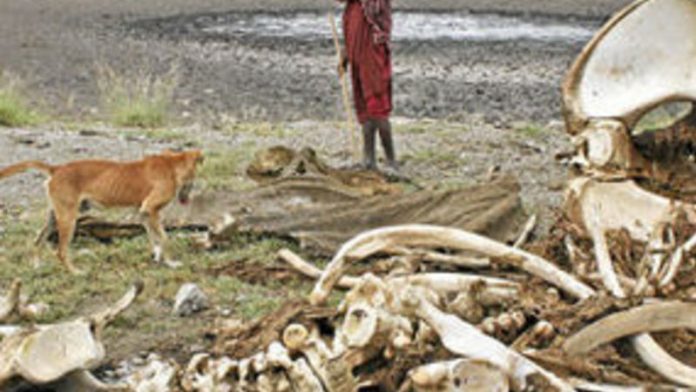 Ever more of them are going to the grave – and their deaths are haunting the Tanzanian economy.

They are Tanzania's elephants, the second-largest national herd in Africa, after Botswana. There are 70 000 of them, mainly concentrated in the world's largest game park and Unesco World Heritage Site, the Selous Game Reserve, and in the Serengeti, Katavi, Enduimet and Ugalla reserves.

According to the government's Tanzania Wildlife Research Institute, Tanzania loses 30 elephants a day to poachers. Total numbers are now less than a third of what they were in the 1960s.

"At the end of the year, you're talking about 10 000 elephants killed," says James Lembeli, chairperson of Parliament's natural resources committee and a former parks official. "Move around this country where you have populations of elephants: carcasses everywhere."

In 2011, more than 65% of the carcasses encountered on patrols in Selous had been killed by poachers.

On his visit to Tanzania last month, United States President Barack Obama pledged $10-million to curb the illegal ivory trade. He called for the formation of a dedicated Cabinet committee to develop a national strategy on the issue within six months.

A 2011 Convention on International Trade in Endangered Species (Cites) report indicates that, since 2009, most illegal ivory has come from Tanzania, Kenya and South Africa. Last year, it reported that most ivory consignments left through the Indian Ocean seaports of Tanzania and Kenya. The statistics also show that Kenya and Tanzania together accounted for 16 of the 34 large-scale ivory seizures recorded from 2009 through 2011.

Preceding decade
The banning of the ivory trade in 1990 under the Cites led to a temporary drop in poaching after the holocaust of the preceding decade. But since sales by the Southern African countries resumed in the early 2000s and China was designated an approved purchaser, there has been a massive jump in the killing of elephants, amid evidence that the Far East-based ivory syndicates are back in business.

Last year, the New York Times reported a 70% upsurge in the poaching of African elephants. In 2011 alone, there were 14 large-scale ivory seizures – a double-digit figure for the first time in 23 years, when Elephant Trade Information Site records were first compiled. They totalled an estimated 24.3 tonnes, more than in any previous year.

In Tanzania, ivory smuggling involves an extensive secret criminal network known to include politicians, well-known businessmen, army officers, rangers and wildlife police. According to the Environmental Investigation Agency, poachers enter the reserves for about two weeks at a time, killing between 10 and 15 elephants on each trip. They generally carry sophisticated assault rifles sold to them by dealers from war-torn neighbouring countries such as the Democratic Republic of Congo, Burundi and Somalia.

The ivory is then buried at remote locations on the edge of the reserves until it is sold to traders, often retired army, police and government officials, usually from Dar es Salaam. The traders may also provide the poachers with weapons.

The transactions take place in villages that have become known trading hot spots. They include Mloka, north of the Selous; Chumo in the centre of the reserve; and Liwale in southern Tanzania. The town of Somanga is a key transit point on the road from Lindi in southern Tanzania to the coast.

A villager from Lindi told amaBhungane that poaching and the ivory trade are flourishing in the area, with constant demand from buyers in Dar es Salaam. The nearby villages of Chumo, Chapita, Kinjumbi and Rutambi are also said to be hot spots.

The Tanzania Elephant Protection Society reports that some of the gangs consist of poachers who have travelled from countries such as Kenya, Somalia and Burundi.

Consignments
According to the Environmental Investigation Agency, poaching generally takes place in the rainy season, between June and September, when the reserves are mainly closed to tourists.

The traders stay in local hotels or guest houses while completing the deals and pay between 25 000 Tanzanian shillings (Tsh) (R158) and Tsh45 000 a kilogram.

The ivory is transported in small consignments on public buses and even in government vehicles, which are not searched at police check points.

It is then sold on to the smuggling syndicates, though a small quantity finds its way to Mwenge market in Dar es Salaam, where it is possible to buy both crafted and raw ivory products.

Raw ivory tusks are usually stashed on the roofs of shacks or at other nearby locations.

A kilogram of African elephant ivory has a current world black market price of about $2 200.

A 2103 report by the Tanzania Elephant Protection Society (Teps), a nongovernmental organisation, says that the Dar es Salaam port is a major transit point for tusks bound for China, Vietnam, Japan, Thailand and the Philippines.

The traffic is allegedly facilitated by corrupt officials in the taxation and clearing departments.

Export operation
Significantly, most seizures have not taken place in Tanzania, but at ports of entry in the Far East. Most of the ivory finds its way to manufacturers, where it is fashioned into chopsticks, jewellery, ornaments, hair accessories and other items.

The Tanzania Elephant Protection Society report also points a finger at China, the top investor in Tanzania, warning: "Tanzania's partnership with China is of great benefit to the country's economy and development, but it must not be at the expense of Tanzania's vital natural resources and tourist industry."

The signs are that the trafficking of Tanzanian ivory continues to escalate.

The African elephant's survival as a species is clearly on the line: in 1930 there were between five and 10-million elephants on the continent – because of poaching and habitat loss, half a million remain.

The illegal ivory trade also poses a grave threat to the economy of impoverished Tanzania. According to the ministry of natural resources and tourism, tourism accounts for about 17% of the country's gross domestic product and almost 25% of export earnings.