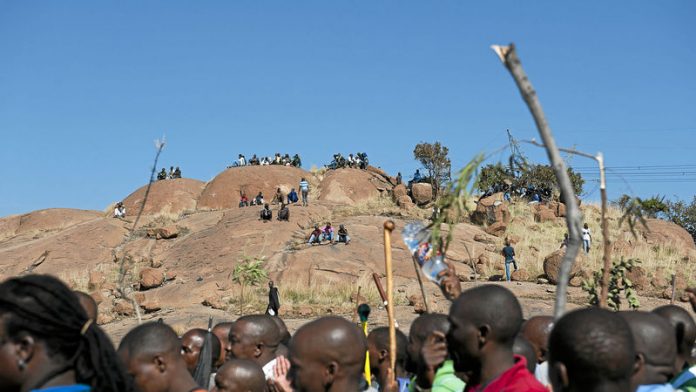 Late on Monday night, police raided Marikana, looking for weapons. Another person had succumbed to the killing fields at the mine earlier that day. She was a National Union of Mineworkers (NUM) shop steward, the union said, adding that the police seemed unable to investigate the incessant murders that have characterised the mining community, both before and after August 16 2012. The victims of the Marikana massacre will be commemorated on Friday.

Meanwhile, the Farlam commission of inquiry investigating the massacre remains postponed until Wednesday, while the injured and arrested Marikana miners push for the Constitutional Court to resolve the issue of the funding of their legal team.

That issue is now headed for the Constitutional Court. Two prevailing narratives have emerged in court papers:

The state says the miners are witnesses, not accused persons in a criminal trial or victims of a crime that would necessitate the state to provide funding for their case. It further asserts that the police acted in self-defence in August last year. The police have also maintained, during evidence given from various police leaders, that they had a duty to uphold law and order at Lonmin's Marikana platinum mine. The accusation that they were aggressors has yet to be proven, the police say.

But according to advocate Dali Mpofu acting for the injured and arrested, the constitutional principle of fairness must apply: the miners are as entitled to funding from the state for their legal representation as the police are. And they have not asked for the same amount: merely for enough funding that would allow them to be represented "adequately and meaningfully" at the commission.

Bongumusa Trevor Sibiya, from the Legal Resource Centre, acting on behalf of the Ledingoae family (Kutlwano Ledingoane died at Marikana) stated in a supporting affidavit: "The commission is unlikely to be viewed as credible if it is tainted by unfairness. Manifest unfairness arises in the eyes of the public when one side to the dispute, namely the police, is lavished with financial support and personnel, while the other side is denied even the most basic support to be adequately represented."

The commission is in agreement that the injured and arrested miners are entitled to funding so that they can be adequately represented during proceedings. But that's where it's opinion on the matter ends: commission spokesperson Tshepo Mahlangu told the Mail & Guardian that the miners deserved funding. It is hoped that by Wednesday, a private funder would have come forward to resolve the issue.

But the commission is not going to divulge any more details: it is impartial as to who must pay for the miners' legal fees, Mahlangu said.

Separation of powers
Judge Raulinga, in dismissing Mpofu's high court application for state funding, relied on, amongst others, the Constitutional Court's judgment in the case of the treasury versus the Opposition to Urban Tolling Alliance (Outa): in essence, that courts should be loathe to dictate to government how it should spend its money and maintain the separation of powers principle.

But the applicants say this is not applicable, and that the crux of that case was not merely that the Outa applicants wanted to force the state to change its policy, but that those applicants also wanted the court to dictate to the state the method in which the state should do so.

The papers state that a "longstanding disagreement" with the Raith Foundation, which contributed over R2-million of the legal team's funding, had now been resolved.

As things stand, of the 13 months that the commission has been operational, the Raith Foundation funded lawyers for the injured and arrested for six months at Legal Aid rates. The other seven months remain unfunded.

And the commission is expected to continue well into 2014.

Meanwhile, private funders believe the state should be funding the Marikana victims' legal representation, Mpofu and others argue, and they are thus hesitant to provide funding. These potential funders include the Raith Foundation and the Black Lawyers Association. Meanwhile, Mahlangu told the M&G that the commission was "cautiously optimistic" of a resolution to Mpofu's funding woes by Wednesday.

Further postponements would be detrimental to the commission, and the injured and arrested miners must be present at the proceedings for the commission to resume with its credibility intact, he said.