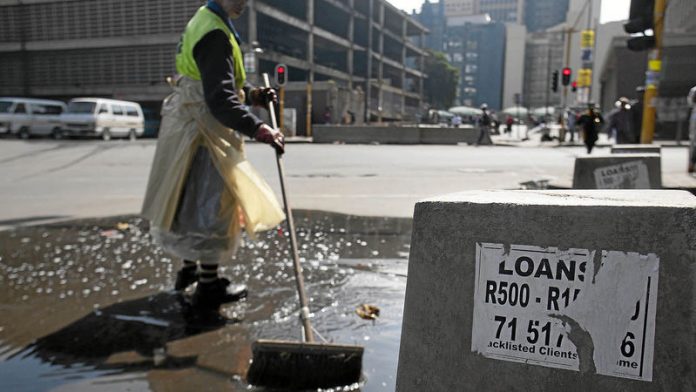 Political pressure ahead of the national elections is seen as a motivating force for the sudden flurry of activity by the government around credit practices, including reforming the garnishee system that allows creditors to deduct money from employees’ salaries.

A presentation this week by the Gauteng finance department to its provincial finance portfolio committee showed that government employees in the province have, on average, six garnishee orders.

There are an estimated three million garnishee orders currently in place, according to the National Debt Mediation Association, a credit industry body in Johannesburg that assists indebted consumers.

But key players — including the big banks, microlenders, the treasury and the department of trade and industry — appear to be differing on how to approach garnishee reform.

This is exacerbated by moves to fast-track a credit amnesty, which will allow for the removal of black-listed offenders as soon as their debts are paid. This is opposed by banks, which say it will be harder to run credit checks without the blacklist.

The fast-track is being seen by banks as a politically expedient move ahead of elections next year.

In the garnishee steering committee, set up under the auspices of the department of trade and industry, allegations of betrayals and attempts at behind-the-scene negotiations between organisations and government departments have led to bitterness among certain members.

One of the actions that caused deep unhappiness among task team members was the sudden decision by the Banking Association of South Africa (Basa) and the treasury to call a press conference in November to announce that the banks had committed “to no longer use garnishee orders against credit defaulters, as they [the banks] believe the use of such orders for credit is inappropriate”.

The statement was later retracted by Basa, with little of the first announcement’s fanfare. This incurred the wrath of the treasury’s chief director for financial sector development, Ingrid Goodspeed, who saw it as a betrayal.

But the move created the impression of a division, with the treasury and banks on one side and other lenders and the department of trade and industry — who initiated the process in a bid to find a solution that could save the lending industry — seen to be on the other side, according to a source close to the negotiations.

A source said: “The treasury and Basa went off on their own to a room somewhere and drafted the statement in the middle of task team discussions around amendments to the Magistrate’s Act [which governs the issuing of garnishee or emolument orders], and the next thing we [the rest of the committee] heard that there had been a press conference.”

Support for a revised system
It’s not clear why Basa later withdrew its decision, but in presentations to the parliamentary trade and industry portfolio in February, FNB, African Bank, Standard Bank, Absa, Capitec and Nedbank indicated their support for a revised garnishee system.

African Bank and Absa said they believe that unsecured personal loans have received an unfair rap because of abuses in the garnishee system. It’s not surprising that the process has been a heated one, with the smaller lending organisations literally fighting for their existence.

The law, the result of a Constitutional Court ruling, does not allow for the jailing of defaulting creditors, so the unsecured lending market would face increased risk without the garnishee system.

According to Basa managing director Cas Coovadia, the standing committee is expected to submit revised proposals to the treasury next week.

“A revision was required to include people who already have garnishee orders against them and provide protection for them,” he said. “It goes without saying that all parties involved want to complete the process as soon as possible.”

Coovadia admitted that the year-long process had been “challenging” because microlenders and banks have different business models.

A good compromise
Despite all the challenges experienced, a team member, who represents the smaller lenders, said in the end he felt the proposal would be a good compromise.

“A good compromise is when no one is completely happy,” he said, tongue in cheek. Though Coovadia may have been diplomatic about the garnishee process, he was forthright about his dissatisfaction around the speed with which the credit amnesty process is being dealt with by the government.

The department of trade and industry has indicated that it would like to see it in operation by November, although it’s yet to be presented to Cabinet by Minister Rob Davis. On August 14, Coovadia told Business Day that he suspects there are “political reasons” behind the government’s haste in pushing ahead with the credit amnesty process.

He said he believes the process, the second credit amnesty, requires a public hearing.

The National Credit Regulator has also found itself under increased scrutiny and pressure as the government focuses its attention on lending. In February, it made an unprecedented call for a fine of R300-million to be imposed on African Bank for reckless lending.

The Marikana shooting
Hennie Ferreira, chief executive of MicroFinance South Africa, believes that the shootings at Lonmin’s Marikana mine, and revelations of severe indebtedness and garnishee orders that left miners in some cases with no salaries, added a political element that put additional pressure on the committee.

“Unfortunately the immediate response was emotional and political, which led to calls being made for the system that could be saved to be abolished, without a real understanding of how the system works and where it is falling down.

“Without legal recourse, however, the lending sector faces increased risk, as happens when you introduce any uncertainty.”

Ferreira, who represents about 2 000 members, agrees that the system had been abused as the result of the actions by some by microlenders, which had not followed procedures, and officials in magistrate courts, who were either corrupt or overworked.

He said his organisation and others in the sector had raised their concerns about corruption in the courts but no action had been taken.

“The sector raised concerns about court clerks who accepted blank documents and passed flawed documents. This should have become a police matter but no real action was taken,” he said. “The courts fall under [the] justice [department], so why weren’t clerks arrested and prosecuted?”

Ferreira said the only way to fix the system was for all the players to work together.

Unusual move
In a move that may be considered unusual, a second independent task team has been set up, headed by credit ombudsman Manie van Schalkwyk.

This committee is looking not only at the drafting of codes of conduct, and possible legislative changes that can be made to address issues plaguing the system, but also dividing up research among the role players.

The task team is made up of a range of bodies including the Credit Bureau Association, the Council for Debt Collectors, the Association of Debt Recovery Agents, Garnishee Administrators, the Large Non-Bank Lender Association and MicroFinance South Africa.

Coovadia said the work of the two teams, although they overlap in some areas, would complement each other.

Van Schalkwyk has taken a hard line on garnishee orders, saying the practice was unsustainable and its “continuation will have a significant socioeconomic impact on our country”.

Goodspeed said, in answer to questions from the Mail & Guardian, that the treasury would not hesitate to propose that garnishee orders be abolished if there was any evidence of continued abuse.

Urgent attention needed
“It needs urgent attention. The abuse of emolument attachments or garnishee orders has left many workers without money to live on after they have serviced their debts every month,” she said.

Goodspeed said the University of Pretoria was busy with follow-up research on a 2008 study into garnishee orders and debt. The research would be useful in understanding the system and any flaws.

She said, however, that tackling this abuse required joint effort. “The abuse of emoluments or garnishee orders should not be seen in isolation. There are a number of issues relating to reckless lending and borrowing that need to be addressed. Credit providers and users have work to do in this regard.”

She said customers also needed to ensure that they did not take out loans they could not afford and to make sure they dealt only with reputable credit providers.

“If they are over-indebted or debt-stressed they need to talk to their credit providers,” she said.

Goodspeed said she found it encouraging that banks were undertaking to reduce instalments to struggling borrowers without additional costs to the borrower.

Debates and solutions to garnishee system
Some of the biggest stumbling blocks in the department of trade and industry’s steering committee negotiations were around the capping of interest rates, the legal costs and the amount that can be deducted from a staff member’s salary.

Suggestions put on the table by the committee members included the establishment of a database that would list all allocated emoluments to prevent a situation in which employees were sitting with 12 garnishee orders and zero take-home pay. How to fund such a database and who would run it, was a subject of much discussion.

The Law Society of South Africa and the National Credit Regulator was considered to be too soft on those found guilty of corrupt practices, and it was felt that the NCR required additional funding to be able to carry out the kind of research needed and to employ experienced staff.

The practice of allowing emolument orders to being granted without being accompanied by a properly calcualed schedule of costs and interest, was also criticised. Without this, staff members ended up paying off debt long after it had been settled.

There is supposed to be a 40% cap on state employee salaries, but research by the Mail & Guardian has shown that this has not been adhered to.

One lawyer suggested that a section of the Magistrates’ Court Act be amended to protect an employee who refuses to allow the deduction of the emolument payment from having his goods, such as his furniture, attached.

Credit amnesty clarified
The National Council of Provinces is supporting a proposal to give credit amnesty to about R1.6-million people.

The amnesty will allow for a record of adverse judgments on credit records to be removed once the debt has been paid.

This will be the second credit amnesty that has been put forward by government. Credit providers have objected to the proposal for a second amnesty, saying it will make lending more risky and expensive, and that it will send the wrong message to delinquent consumers.

The National Credit Regulator said that amnesty would take effect only after stringent affordability assessment guidelines were in place. A report on the first credit amnesty is before Cabinet.