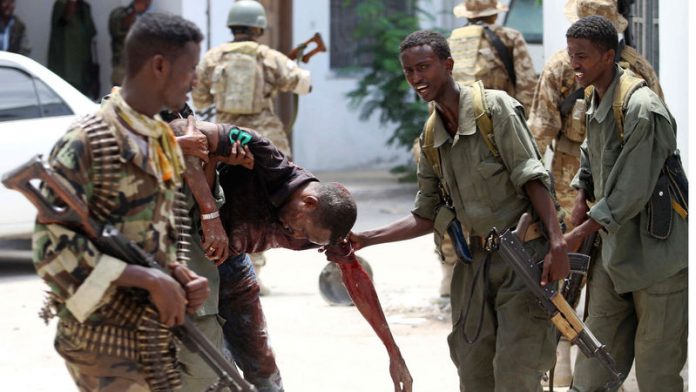 Colonel Abdullahi Muse Keyse, a spokesman for Somalia's military court said the execution by firing squad of Aden Sheikh Abdi took place early on Saturdayin Mogadishu. "His execution is a new chapter for Somalia," he said.

Last month a Mogadishu military tribunal found Abdi guilty of the murder of reporter Hassan Yusuf Absuge late last year, who worked for Radio Maanta in Mogadishu. During his trial Abdi was accused of belonging to the al-Qaeda-linked extremist rebels, al-Shabab, who have staged multiple terrorist attacks across Somalia in a bloody campaign to seize political power.

The rebels were pushed out of Mogadishu in August 2011, but they continue to carry out targeted killings there and elsewhere in Somalia. The Abdi case was the first to be actively prosecuted by the Somali government, coming after years of condemnations from rights groups who urged Somali authorities to do more to establish the rule of law and end the killings of journalists.

The killing of media workers often happens in government-controlled areas that journalists generally consider safe. Reporters also look out for attacks from extremists and criminals, and fight through judicial inaction and even outright hostility from the government.

Tom Rhodes, the East Africa consultant for the Committee to Protect Journalists (CPJ), praised the decision to execute the convict, saying it would help end impunity in the volatile Horn of African nation. "This appears a positive step in ending a long record of impunity in the killing of journalists in Somalia," he said.

"Somalia has routinely ranked high on CPJ's impunity index for unsolved murders. Let us hope that this case will send a clear message to those who believe in silencing journalists through the gun … that there are consequences."

Somalia is one of the most dangerous places for media workers. At least 18 Somali journalists were killed last year, according to CPJ. – Sapa