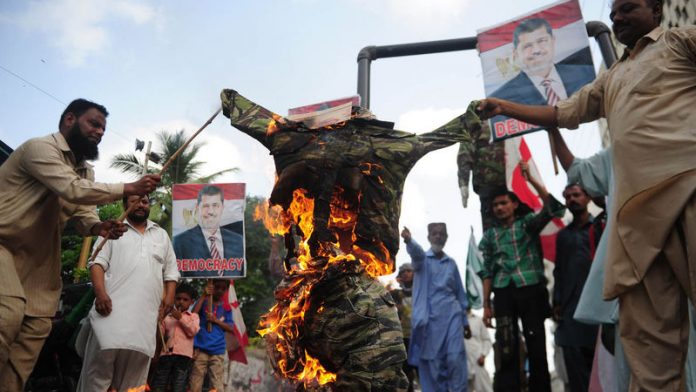 Top European Union officials prepared on Monday to hold emergency talks on the crisis that has claimed nearly 800 lives in five days.

"We will never be silent in the face of the destruction of the country," said Sisi, who overthrew Morsi on July 3 after protests against the Islamist president's rule.

"We are very prepared for this," he said, pledging a "forceful" response to further attacks on police stations and government buildings.

The violence sparked by the crackdown has drawn international condemnation and EU leaders have warned the bloc will "urgently review" ties with Cairo in the coming days.

European ambassadors were recalled from their summer break for an emergency meeting on the crisis expected to start in Brussels at 8am GMT.

Thirty-six dead prisoners
The European Union has pledged nearly $6.7-billion in aid to Egypt but the bloc has cautioned this too was under "constant review" after Morsi's ouster.

In a joint statement on the eve of the talks, EU leaders Herman van Rompuy and José Manuel Barroso said: "The EU will urgently review in the coming days its relations with Egypt."

Calling for violence to end "immediately", they stressed that "the calls for democracy and fundamental freedoms from the Egyptian population cannot be disregarded, much less washed away in blood".

But the bloodshed showing little sign of stopping on Sunday as 36 Islamists were killed during an attempted jailbreak.

There were conflicting reports of how the deaths occurred but the Egyptian interior ministry said the prisoners had taken an officer hostage and died after suffocating on tear gas.

"Thirty-six of the prisoners died of suffocation and crowding after tear gas was used to stop their escape," the ministry said.

The killings were the latest in five days of bloodshed since Wednesday's police and military operation to clear Islamists from protest camps in Cairo.

"The murder of 35 detained anti-coup protestors affirms the intentional violence aimed at opponents of the coup, and the cold-blooded killing of which they are targets," it said in a statement in English.

The Islamists said they cancelled "several marches" on Sunday, citing fears of vigilantes and snipers.

Two police officers were later killed in a shooting attack near the city, according to the interior ministry.

Violence has also continued to plague the Sinai Peninsula, where a civilian, two soldiers and a policeman were killed overnight Saturday, security sources said.

The unrest has left Egypt divided as never before.

Vigilantes have pulled bearded men out of cars, and a mob chanted "terrorists" as Morsi supporters were dragged from Cairo's Al-Fath mosque on Saturday after a tense siege that included exchanges of gunfire.

According to an AFP tally, more than 1 000 people have been killed since mass demonstrations against Morsi erupted at the end of June, among them a son of the Brotherhood's supreme guide who died on Friday.

'Terrorist plot'
Despite the international condemnation of the violence, authorities have stood firm, saying security forces are facing down a "terrorist plot" while dismissing reports it plans to ban the Brotherhood.

But French President François Hollande said after a meeting with the Saudi foreign minister: "It is unacceptable that there is violence of this level in a great country like Egypt."

British Foreign Secretary William Hague has called his Egyptian counterpart to condemn violence by both sides, and described as "unacceptable" attacks against churches.

The United States has announced the cancellation of its biannual military exercise with Egypt, and its embassy in Cairo was closed on Sunday for security reasons.

The White House has stopped short of suspending $1.3-billion in annual aid, although some US lawmakers called on Sunday for the funds to be cut.

But the international response has not been uniformly critical. Both Saudi Arabia and Jordan have said they back Egypt in its fight against "terrorism".

On Sunday morning, the capital showed signs of returning to normal, with traffic beginning to flow again and banks and shops reopening for the first time since Wednesday.