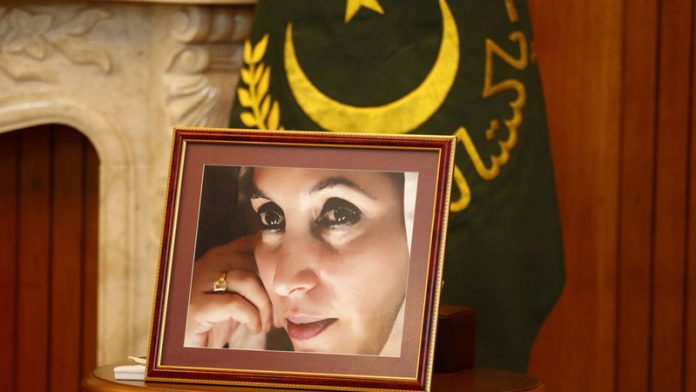 A court in Pakistan has formally indicted former military dictator Pervez Musharraf on Tuesday with the murder of former prime minister Benazir Bhutto who was assassinated in 2007.

"He should be tried," the public prosecutor, Mohammad Azhar, told reporters on Tuesday after a brief hearing in the city of Rawalpindi during which the three charges of murder, conspiracy to murder and facilitation of murder were read out to Musharraf.

The indictment of the army chief who seized power in a 1999 coup – at one stage Pakistan's most powerful man – is an unprecedented event in a nuclear-armed country ruled by the military for half of its 66-year history.

The case has also shattered an unwritten rule that the top military brass are untouchable as the South Asian country tries to shake off the legacy of decades of military rule under the new government of Prime Minister Nawaz Sharif.

Musharraf, who made no public remarks during his appearance, denied all the charges against him, a lawyer from his defence team said. Journalists were not allowed in the court room for the hearing which lasted just about 20 minutes.

"All the cases against Musharraf are fabricated. He denied all the charges," said Afshan Adil, the lawyer. The next hearing was set for August 27.

Threats to his life
Bhutto was killed in a gun and suicide bomb attack after an election rally in 2007, weeks after she returned to Pakistan from years in self-imposed exile.

The government at the time blamed Pakistani Taliban militants, and Musharraf said he warned her of the danger she faced.

Hundreds of police were deployed along the main road leading to the court as well as on rooftops as Musharraf's car arrived.

On August 6, the court delayed the widely expected indictment because it was too dangerous for Musharraf to attend the proceedings due to threats to his life. – Reuters

Pakistan Taliban threaten to send Musharraf to ‘hell’ when he returns

Pakistan on the edge