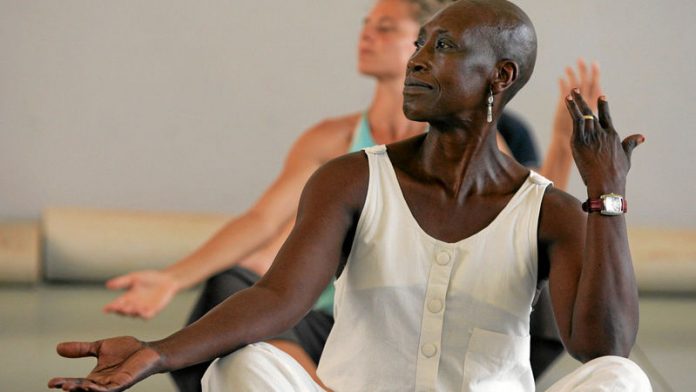 Swelling drumbeats draw contemporary Senegalese dancer Germaine Acogny's undulating body across the stage’s deep-blue background. Surging her arms with great force, as if rowing a feeble boat across resistant seas, for several minutes she makes it to the other side of the theatre platform, only to return again.

First with conviction and then finally, as the lights dim and beats are drawn out, the gestures of the desperate-looking Acogny eventually cease. Splashing invisible water on to her glistening, sweaty face, she has reached her destination.

In Acogny's solo show Songook Yaakaar (Facing up to Hope), the bald-headed dancer narrates the tumultuous journey of those in search of security on fragile wooden boats.

Songook Yaakaar – which premiered at the Biennale de la Danse in Lyon in 2010 – traces the precarious voyage of thousands of Senegalese crossing unpredictable seas.

It is this performance that she will enact at the Dance Umbrella that celebrates its 25th anniversary next month.

Uncertain of what's waiting far away, this story could be that of fearful African slaves being shipped off to the West over three centuries ago. But in this case, the ones on the boat have faith in their departure.

'We relay our own story'
''Despite travelling illegally on these boats, they still have hope in the face of uncertainty,''says the award-winning 69-year-old dancer of the exodus of her countrymen.

''People in Senegal refuse to accept terrible circumstances; they don't accept living in bad conditions, so they look to Europe for hope.''

Thousands of Senegalese flock to countries such as Spain. Some die en route or are deported upon arrival. Acogny says she wanted to share this story because it’s an African one.

''I think it’s important that, as Africans, we relay our own story. We can't let others speak about African issues any more.''

Acogny’s reliance on the body as her medium speaks for a continent of people who have relied on various dances to assert culture. From performing trancing religious rituals to honouring a bride on her wedding day, dancing has always been inherent to Africa’s people.

Like Songook Yaakaar, Acogny has brought to her audiences performances laden with sociopolitical critique.

Having danced for more than 45 years, Acogny – known as the “mother of contemporary African dance”– says that her performance art is how she chooses to deliver this narrative.

Yet – speaking passionately in a telephone interview from Toubab Dialaw, a fishing village outside Dakar – she is on the brink of a tour to Taiwan. Through the French-English translations of her husband and work partner Helmut Vogt, she lets on that dance is all she knows.

''Poor, young, single and a mother of two, I started teaching dance and working with women and children to earn money. I didn’t have anything but dance.''

Since then she has studied both occidental and traditional West African dance. ''I also incorporate some movement from my ancestors, but my dancing style is a mix of traditional movements –some which I learnt from my grandmother, a Yoruba priest.''

This melange of dance forms has given birth to contemporary African dance, which, Vogt says, is unique.

''Incomparable to the style of other big names in the industry, Germaine’s type of dance is her own.''

'Put your roots in the ground'
On stage in Songook Yaakaar, the spotlight gently falls on the dancer like the feathers of a thousand sand vultures circling over the boat of a lone, emaciated sailor.

The shadows add depth to her movement as she sways on stage with her feet thundering on the ground, as though they’re pleading with the earth to open its door.

''My technique is rooted in nature,'' she asserts, adding that nature is also what links Africa’s many dancing styles. ''It’s important to put your roots in the ground.''

One of the defining characteristics of her body's articulation is the movement of the spine, says Acogny, who heads the International Centre for Traditional and Contemporary African Dances in Senegal.

''This spine motion is called the ‘snake of life’, with its waving movements that contract and undulate.''

Acogny says she also looks to plant life such as the floating water lily or Senegal’s fromager tree, with its buttress roots, to layer her performance.

A wordless form
Swaying her hips and motioning her arms – as if she’s still rowing her boat – Acogny's body looks lost in the foreground as a canoe projected on the wall behind her sails across never-ending seas.

Unlike conceptual artists who use text to bring their points across, Acogny’s approach to expression lends itself to a wordless form.

''The body is a lot more emotive than words,'' she declares.

The Dance Umbrella takes place at the Dance Factory, Market Theatre and Wits Theatre from August 31 to September 14. For programme details, visit danceforumsa.co.za. Songook Yaakaar will be on at the Market Theatre on September 11 and 12 at 7.30pm