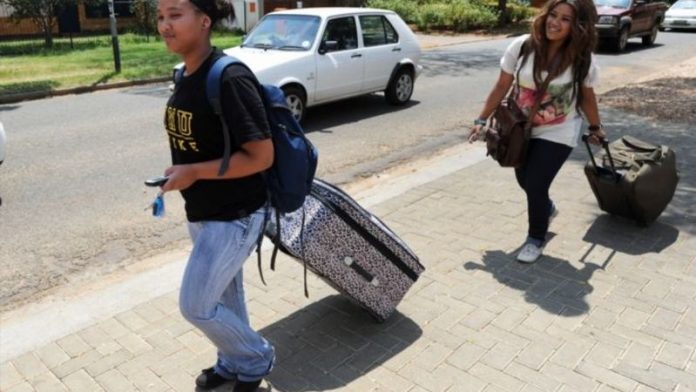 Management of North-West University (NWU) has defended its controversial language policy, which entails non Afrikaans-speaking students at its Potchefstroom campus receiving lessons through translation headsets in class because lectures are mostly conducted in Afrikaans.

University management rejected demands for a review of the university’s language policy following a protest march a month ago by the National Education, Health and Allied Workers' Union (Nehawu).

A letter signed this week by acting registrar John Botha, which the Mail & Guardian has seen, said NWU has "implemented a functionally multilingual language policy" since 2007, which was adopted "after a proper consultative and inclusive process".

"Apart from classes offered in the parallel and dual modes of delivery, large-scale educational interpreting services are rendered. Study guides are throughout available in both English and Afrikaans, and in some instances also in Setswana and Sesotho."

March
Hundreds of Nehawu members and sympathisers, including students from NWU’s three campuses, took to the streets of Potchefstroom a month ago to march on NWU’s campus in the town. They protested that the university was not transforming to reflect the racial dynamics of the country and North West.

An excessive use of Afrikaans on the Potchefstroom campus was one of the examples the union cited. Another was an allegation that management was blocking an independent investigation into the mysterious drowning of first-year student Thabang Makhoang in 2012. Nehawu alleged that there was victimisation of students who spoke out against management and racist labour practices.

Patrick Makhafane, North West secretary of Nehawu, told the M&G on Thursday: “We think that [this translation mode] is disadvantageous to the majority. It’s always best for any student to receive lessons first hand. This way they can engage much better in class. We don’t understand why the university is not changing that system [to start] using English as a medium of instruction.”

But the use of Afrikaans on the campus will remain, NWU management told Nehawu. "It is important to mention that both the Constitution and the National Language Policy for Higher Education allude to the importance of retaining Afrikaans as a language of higher learning. Although the NWU has a large number of students who prefer to be taught in Afrikaans, it remains mindful of the fact language may not act as a barrier to access and success."

University spokesperson Louis Jacobs was not immediately available for comment on Thursday, but he told the M&G after Nehawu’s march a month ago that the translation system was "so successful that other universities in the country want to adopt it". PhD students performed the live and direct translations, he said.

Management said in its response to Nehawu that it was "particularly concerned about [the university’s] role and contribution as far as the elevation of African languages as languages of higher learning are concerned … Although various projects are under way in this regard, much work still needs to be done."

Higher Education and Training Minister Blade Nzimande has urged the country’s 23 universities repeatedly to foster teaching of African languages. And in May the University of KwaZulu-Natal announced that all its undergraduate students would be required to take an isiZulu module before they can graduate.

Afrikaans
The M&G reported earlier this year that lectures at Pukke, as the campus is nicknamed, are predominantly in Afrikaans and it could prove difficult to navigate the campus if you do not speak the language as all the signs are in Afrikaans.

On Nehawu’s allegation that management is blocking an independent investigation into the death of Makhoang, the letter Botha signed this week says a probe by the university’s council last year – led by advocates Vusi Pikoli and Lourens de Koning – "found that the drowning was an unfortunate accident, for which no blame could be levelled against any individual or entity … In addition, the South African Police Service did its own investigation and no prosecution flowed from that."

But the letter concedes that university staff, especially at management level, are not yet truly racially transformed: "The improvement of equity profiles remains an important priority of the human-capital agenda of the NWU as is prescribed by the national legislation. Equity management is a vital aspect of the university’s commitment to contribute to development.

"Various measures are in place, both at governance and management level, to monitor and measure the effectiveness and efficiency of the equity enhancement processes at the NWU."

It rejected outright claims that management targets and victimises outspoken black staff and students. "It is impossible for the institution to have any say in the outcomes of the process, procedure and the decisions of the presiding officers" as all disciplinary hearings are chaired by an "independent" individual.

Makhafane said Nehawu leaders and the union’s allies would convene soon to discuss management’s response and decide their next step. "We may find a situation where we intensify our action," he said.

Why the Eastern Cape might take longer to roll out vaccinations